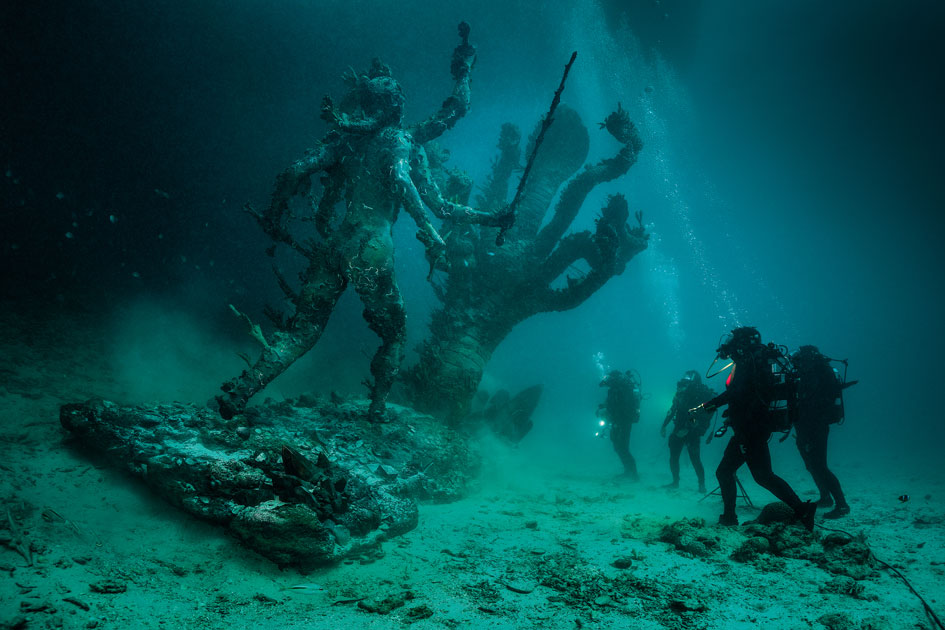 Venice—Italy’s wondrous floating city—is a melting pot of culture and is the perfect destination for art lovers. The vast assortment of galleries and historic buildings make the entire city feel like one large museum. We explore the latest must-see exhibitions in Venice that make it their business to push the boundaries and express vivid messages through awe-inspiring sculptures, installations, paintings and crafts.

Hailed as the wildest and most elaborate project of Damien Hirst’s career so far, Treasures from the Wreck of the Unbelievable has been 10 years in the making. For the first time, a sole artist will occupy Venice’s Palazzo Grassi and Punta della Dogana with a single exhibition, which will be open until 3 December 2017. Curator Elena Geuna’s opening statement begins, ‘Once upon a time […]’, indicating the start of something mythical and wondrous. The exhibition revolves around the fictional tale of Cif Amotan II, a freed slave turned wealthy collector from Antioch, whose ship, the Apistos (translated as the ‘Unbelievable’) was sunk during its commissioned voyage to transport precious cargo. The treasures on board remained dormant beneath the Indian Ocean, until their complex ‘underwater excavation’.

The contents within the collection are covered in ‘natural’ barnacles and crustaceans, immediately sparring with the idea of realism. Pharaonic busts and statues are scattered amongst a menagerie of animals both real and mythical. As the display goes on, Hirst’s characteristic flamboyance begins to shine through. The subjects become modern and elaborate in the second half of the exhibit, with regal embossing and jewels. Figures reveal themselves to have contemporary and humorous undertones—an Amazonian statue is adorned with a pistol tattoo and various celebrity faces are disguised within jewelled figurines. The show in its entirety blurs the lines of fantasy and fiction. The sheer size and spectacle of the collection justifies its deserved title: ‘Unbelievable’.

A labyrinth of contemporary

Once referred to as the ‘Olympics of modern art’, La Biennale di Venezia has returned with its 57th international exhibition titled Viva Arte Viva—running from 13 May until 26 November 2017 in Venice, Italy. Curated by Christine Macel, the exhibition unfolds over nine chapters, involving works by 120 artists from 51 countries. Representatives for each country have crafted artwork specifically designed for the event, taking place in the floating city.

La Biennale is known for championing the best contemporary artists and this year doesn’t seek to break from tradition. The artists featured within it—both obscure and notorious—have collaboratively designed its central pavilion. British sculptor Phyllida Barlow, Australian photographer Tracey Moffatt and German performance artist Anne Imhof are members of the lengthy line-up. From interactive installations to 3D-printed sculptures, there is a wealth of wild and whacky displays to get lost in.

President of La Biennale di Venezia, Paolo Baratta, commented on the event: ‘this year’s Biennale is dedicated to celebrating, and almost giving thanks for, the very existence of art and artists, whose worlds expand our perspective and the space of our existence.’

If you have enjoyed reading about the latest must-see exhibitions in Venice, tune into more inspiring articles on Arts & Collections. See also: Looking Past the Moomins: Tove Jannson’s Newest UK Exhibition