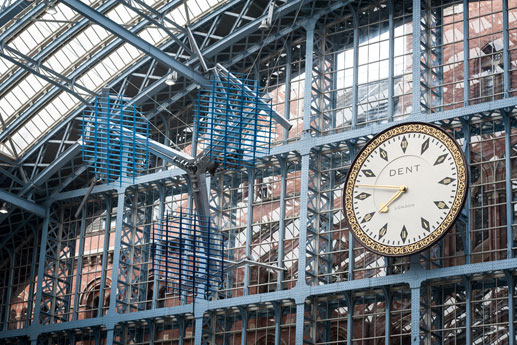 2017 is the fifth year in which St Pancras international station will host their ambitious art programme, Terrace Art. This public modern art programme hangs a new sculpture from the seminal train shed roof for up to 48 million UK and international travellers to view each year. This year’s piece of art, The Interpretation of Movement (a 9:8 in Blue) by Conrad Shawcross RA, is currently being exhibited at the iconic station.

The Interpretation of Movement (a 9:8 in Blue) is Shawcross’s largest work to date. The mechanical structure eclipses the large St Pancras clock, and spans across 16 metres in diameter underneath the immense St Pancras International roof.

Constructed by Shawcross and his team in his Hackney Studio in London, Shawcross prefers a more hands-on approach to his work. The design is made up of three pronounced arms that expand and contract as they orbit and eclipse each other in midair.

Shawcross has long-been fascinated in the visualisations of harmony and has often-attempted to portray the complexities of ratio. Speaking to GQ Magazine, Shawcross spoke about the piece’s numerical complexity:

‘It’s a 9:8 that drives it. For every nine rotations, it moves in and out eight times. So the common denominator is 81, so it takes 81 rotations for it to repeat itself. So there are wheels within wheels and rhythms within rhythms.’

Shawcross’s interpretation of time and how we’ve aligned ourselves into a regimented system has undoubtedly been an inspiring factor in the creation of The Interpretation of Movement (a 9:8 in Blue). The artist uses the time piece—which has become a recognisable and familiar object—and reinvents it with multifaceted components.

‘It doesn’t make any sense. There should have been 36 hours in a day, which would have fitted in more fractally to 360 days a year, 360 degrees of the circle,’ said Shawcross. ‘I was interested in this very familiar object. We’re all taught at school how to tell the time, but actually it’s a very difficult thing to learn.’

As part of the Terrace Art commission, The Interpretation of Movement (a 9:8 in Blue) can be found at St Pancras International Station in London until December 2017.

Happenings: The Unmissable Events of 2017