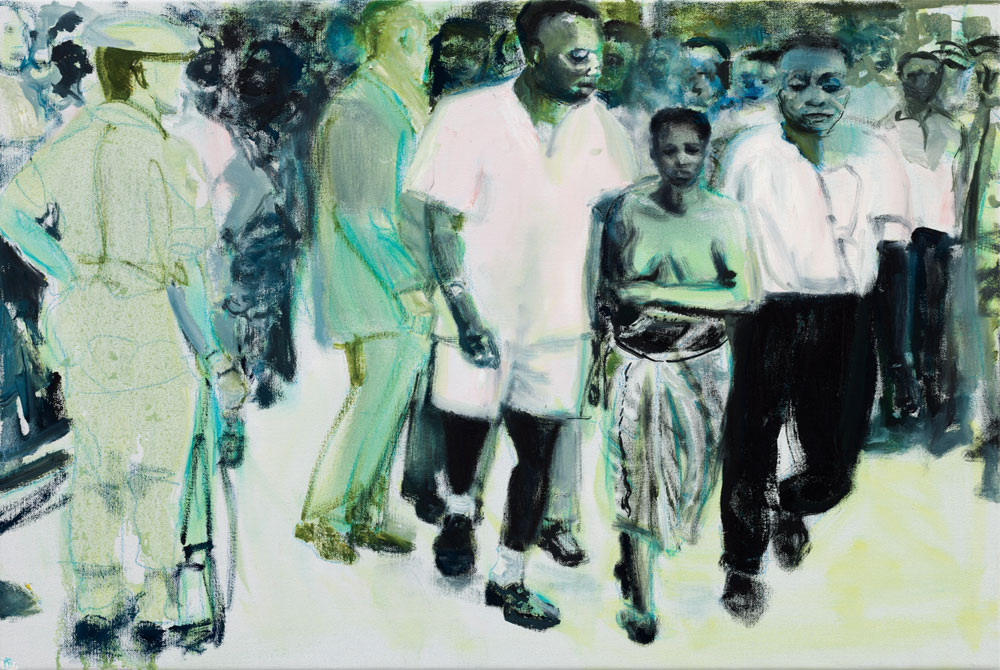 With a major retrospective of her work currently on display at the Tate Modern, London’s gallery visitors have the chance to witness first hand the moving and unsettling paintings of Marlene Dumas.

Praised, criticized and discussed throughout the art world and beyond, Marlene Dumas has been engaging with controversial subject matters in her work since the 1970s. An individual approach to her craft and an eclectic range of influences—many rooted in her background growing up in Apartheid-era South Africa—have distinguished Dumas from her peers, ensuring a commendable career longevity that shows no signs of slowing down.

Since she first started painting portraits in the early 1980s, famous figures ranging from Osama Bin Laden to Naomi Campbell, as well as various family members, friends and unknown persons have become the subjects of Dumas’ expressive work. Their haunting and distorted faces and bodies are a product of her use of thinned down paint, wiping away pigment from the canvas to produce the washed out, smudged figures that are so characteristic of her work. They are at times dark and disturbing, always weighted in emotional poignancy and more often than not, draw on topical and contentious material, repeatedly mixing the personal with the political.

Race, sexuality, celebrity, love, death, violence, religion and politics—none of these topics is off limits for Dumas. She approaches provocative subjects with an audacity that has led her to become one of the most important female painters working today, a fact cemented in 2008 when she was briefly hailed as the most expensive female artist in the world.

Whether representing her own infant daughter in her famous work, The Painter (1993)—an eerie portrait in which the naked child’s hands are covered in blood scarlet paint—or Osama Bin Laden in an uncannily personable depiction of the Al Qaeda leader’s face, Dumas clearly intends to shock and challenge her viewer’s perceptions.

She always paints from photographs rather than life, a decision Dumas has said allows her to distance herself from her subject and paint with an ‘amoral brush.’ It also acts as a commentary on how we process the world around us through the media and its second hand images, with her best paintings of well-known figures and events achieving a new dimension in paint whilst still recognizably recalling their source material. Describing her own artistic process in 1994, Dumas said ‘I deal with second-hand images and first-hand experience.

Unlike many artists working today, Dumas has remained relatively consistent in style and medium, the diversity in her work coming rather from her broad range of subject matter. The paintings that take Africa and racial tensions as their focus clearly draw on her own experiences growing up, as do the explicit pieces set in Amsterdam sex clubs, a notorious element of the city in which she has lived for most of her adult life.

Particularly in recent years, however, Dumas has not been afraid to tackle themes a little more outside of her personal experiences, addressing topical or historical subjects that are at times also overtly political.

At the Tate’s retrospective, a series of drawings entitled Great Men pays homage to gay men of the past (including Alan Turing and Tchaikovsky) who were forced to hide their sexuality. Then there is Against the Wall (2009), a series of oil paintings inspired by the Israel and Palestine conflict, or The Widow (2013), a depiction of Pauline Lumumba in mourning for her husband, the ex-president of the Congo, executed by firing squad.

Dumas’ greatest talent, perhaps, is her ability to take her photographic sources (no painting is ever created from just one photograph) and reinvigorate them on the canvas, regardless of whom her subject is.  With such a varied and global scope of subject matter to draw from, Dumas is unlikely to run out of inspiration any time soon.

Marlene Dumas: The Image as Burden is at Tate Modern until 10 May 2015. With a major retrospective of her work currently on display at the Tate Modern, London’s gallery visitors have the chance to witness first hand the moving and unsettling paintings of Marlene Dumas.