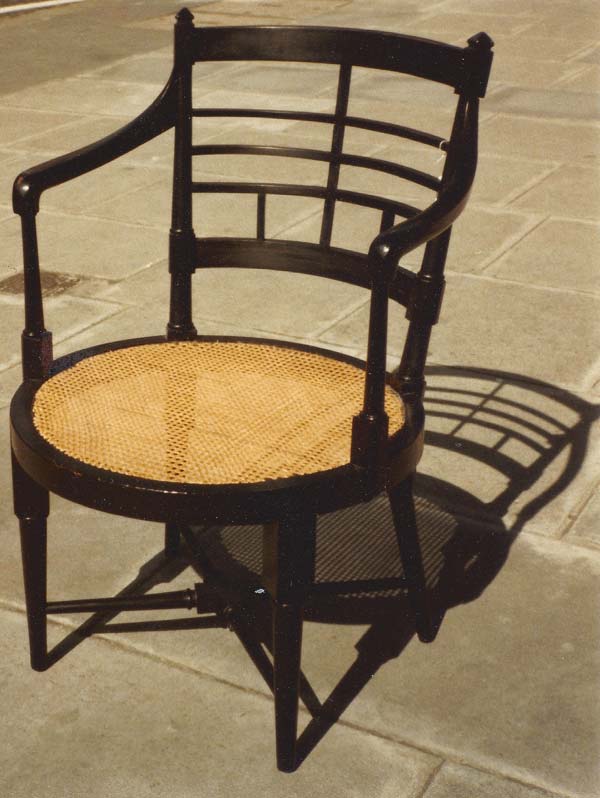 Through the many developing periods of the handmade trade of English furniture, the period that saw the development of the Arts & Crafts movements is one of the most interesting and well documented.

English furniture making has a long and illustrious heritage. Entirely hand-made furniture came from the workshop until the advent of the industrial revolution of the mid-19th century and it was not long until a grow degree of mechanisation reached both large and more humble furniture making workshops. Until that time the word ‘industry’ could not have been applied to furniture making.

Trees were felled with deft blows with axes, the trunks then hauled by horses to the sawyers’ pits where two men with a pit saw took days to saw the trunk longitudinally into planks of various thicknesses. The only ‘mechanical’ aid was the rustic pole lathe, a contraption worked with a tensioning pole and a treadle, that turned often freshly felled timber into legs for tables and especially for chairs. The woodworkers, known as bodgers, would spend months camped out in the extensive English woodlands, turning cleft lengths of timber ready for the chairmakers. Although bodging has taken on a negative meaning today, the bodgers themselves were highly skilled wood turners.

Industrial advancement bought with it woodworking machinery and it looked like real progress for what had become the furniture industry. But by the 1880s a movement took hold known as Arts & Crafts, that sort to resurrect the fine quality and craftsmanship—handmade, using the skills and knowledge that had preceded the industrial age. The Arts & Crafts movement embraced all the crafts and decorative arts, and even architecture. It put craftsmen and designers such as William Morris onto a new social standing: they were no longer simply artisans with a trade, they were artist craftsmen and women who applied skills and integrity to their designs and workmanship.

It was sometimes the case that architects would equip newly build houses with furniture handmade by their craftsmen colleagues. One example was Edward William Godwin, an architect who, with William Morris, around 1867, found the furniture then available in shops so unacceptable in design and manufacture, they set about designing their own own. Chairs designed by Godwin are today extremely collectable (and expensive).

The Arts & Crafts movement blossomed with the trend making prominent through such retail stores as Liberty’s, Waring & Gillow, and Heal’s, to name a few. By the mid-1890s there were new artist-craftsmen leading the way with their fine made furniture—both based in the Cotswolds, there was Ernest Gimson, Sidney and Ernest Barnsley, for example, although their work today is seen as more ‘progressive’ than being directly influenced by the Arts & Crafts movement. These furniture makers recognised the potential of their materials—it might be quarter-cut English oak, inlayed with holly stringing—and they also didn’t wish to hide aspects of construction, such as dovetail joints that did not stop halfway through a drawer front but extended right through, as a visible element.

With these progressions it was clear that some woodworking machinery certainly had its place in the craftsman’s workshop—for one thing, although handwork and benchwork was a fundamental part of the business, machinery played its part in keeping down the cost of fine furniture. In 1923, Gordon Russell exhibited fine crafted furniture at prices that were reasonable for the times, through machine-assisted production.