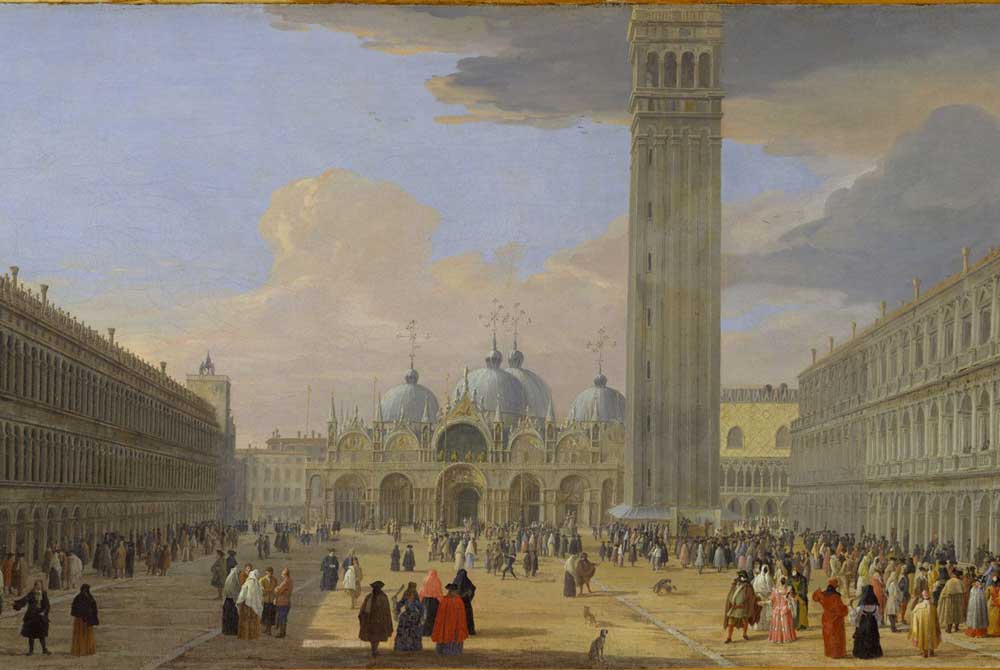 In the eighteenth century, the Grand Tour was an obligatory part of a young nobleman’s artistic, intellectual and sentimental education.

The ‘Grand Tour’, that extended journey to Italy undertaken mainly by British but also French and German aristocrats in the eighteenth century, is not only the stuff of legend, but meant as many different things as there were tourists; each came back with a particular and personal view of the experience.

The Grand Tour evolved during the seventeenth century to become a formative experience for the leaders of British society. Princes, nobles, aristocrats, landed gentry, and politicians—with courtiers, retinues, scholars, tutors, advisors and servants—all made the journey across France. Crossing the Alps at Mont Cenis (usually carried in a chair), they descended into Italy at Turin, or, taking a felucca from Marseilles, they landed at Genoa.

Italy was seen as the cradle of Western civilisation, the source and home of all that was reckoned to be significant historically, aesthetically, politically, religiously and, above all, for collecting: antique sculpture, Old Master paintings, furniture, textiles, objets de vertu, jewellery, contemporary sculpture and painting.

In the latter category, most highly prized were portraits of the tourists themselves by masters such as Pompeo Batoni and ‘vedute’, views of the sites visited as presented in Canaletto’s paintings or Piranesi’s prints. Moreover, Italy was the textbook for students of architecture, with ancient and modern buildings not only to be studied but imitated back home. The British stately home is almost by definition the result of the Grand Tour in both its architecture and its contents.

Earlier this year, the ‘Italy Observed’ exhibition at the Metropolitan Museum in New York showcased a fine selection of Italian vedute, from paintings of Venetian life by Luca Carlevaris to a Neapolitan album of gouache drawings documenting the eruption of Vesuvius in 1794 to sketches and watercolours of Italian antiquities, capturing the artist’s romantic attraction to Italy and its irresistible Roman heritage.

The places to visit included most of the sites still popular with less grand tourists today: Florence, with untold riches held by the Grand-Ducal Medicis in their several city palaces, as well as works of art in the churches and monasteries; Venice, which combined artistic and mercantile wealth; Genoa, which had artistic links with Britain due to the visits of Rubens and Van Dyck whose works adorned that city; and Naples, the capital of the Kingdom of the Two Sicilies, an outpost of the Habsburg empire with a glamorous court and the place where in the later part of the eighteenth century Sir William Hamilton and his wife, Emma—later to achieve fame as Nelson’s lover—held cultural sway.

Later in the century the archaeological excavations at Pompeii and Herculaneum put these on the tourist trail, as sites for the study of the ancient world, sources for yet more riches to be brought home, and templates for decoration and decorative art works in the Neo-classical style that emerged partly as a result of these finds. At the same time, Southern Italy and Sicily were added to the Tour as interest grew in classical Greek architecture, the temples at Paestum and Segesta being among the finest examples.

Above all others, the destination of the Grand Tour was Rome—the crossroads of the ancient and the Christian worlds—and the place that epitomised Western civilisation. The site of the vestiges of the Roman Republic and Empire, those sources of European law and administration, and of the noble examples of pagan virtue and rectitude that inspired the classical ideals of the Augustan gentleman, Rome was also the heart of European Christianity: for Catholics the very heart of the religion; for Protestants, although historically important if doctrinally suspect or downright repugnant, a power to be known and reckoned with.

However, the Grand Tourists were not pilgrims, but came with other motives—often mixed, but principally to drink from the source of civilisation, to undertake a Bildungsreise, the journey of a life time (often lasting several years), an experience that would form an aristocrat’s life-long attitudes, tastes, intellectual habits and manners. It was also a major shopping expedition intended to provide the nobility with objects to furnish their newly built Neo-classical houses.

Grand Tourists can be seen in works of art such as the portraits of Lord Mountstuart and John Talbot painted respectively by Jean-Étienne Liotard in 1763 and Pompeo Batoni, ten years later. Talbot is shown as the consummate Grand Tourist: elegant, poised, nonchalant, surrounded by the signs of his Roman sojourn—a broken capital at his feet, a Grecian urn at his elbow and the Ludovisi Ares in the background.

Tourists who had not done their homework before setting off were ably assisted by their tutors, the ubiquitous and often ill-used ‘bear leaders’, who were also meant to oversee their charges’ moral integrity, a fruitless task more often honoured in the breach.

In fact, the Grand Tourists’ less high-minded behaviour and interests were frequently remarked on—pointedly, in one instance by Alexander Pope who satirised the twin aspects of the Grand Tourist’s agenda: ‘… he sauntered Europe round, / And gather’d ev’ry Vice on Christian ground; / Saw ev’ry Court, heard ev’ry King declare / His royal Sense of Op’ra’s or the Fair; / The Stews and Palace equally explor’d / Intrigu’d with glory, and with spirit whor’d.’

But the Grand Tourist whose budget did not stretch to having a personal tutor was responsible for the invention of what has become an indispensable item of tourism: the guidebook, with foldout maps and panoramic views marked with the not-to-be-missed monuments and sites.

The beautiful red chalk drawing of an antique monument in a landscape by Marie-Joseph Peyre from about 1753-85 is an example that serves as reminder that many Grand Tourists were taught, on the spot, to draw, sketch and paint. The Grand Tourists’ collecting activities promoted the revival of ancient art forms, creating a taste for architecture and sculpture in a Neo-classical or Greek style, and in the manufacture of objects such as Wedgwood cameo wares.

The publication in 1755 of Johann Joachim Winckelmann’s Reflections on the Painting and Sculpture of the Greeks influenced European taste for the next half-century. Greek sculpture was (as it still is) known almost exclusively through Roman copies, and the striving for the cool, serene and noble sentiments that art seemed to embody is exemplified most of all by the work of Antonio Canova, represented by his marble statue of Apollo crowning himself.

Ancient carved gemstones and cameos, cameo casts, contemporary gemstones carved in the manner of ancient ones, prints, and a painting by Canaletto, The Arch of Constantine with the Colosseum in the background, show how works of art served as souvenirs and aide-memoires for returning visitors. Ultimately, their patronage and spending was the driving force behind Neo-classicism, the international style that wedded the principles of ancient art to modern individual inventiveness.

Austerity Measures And a Vintage Celebrity