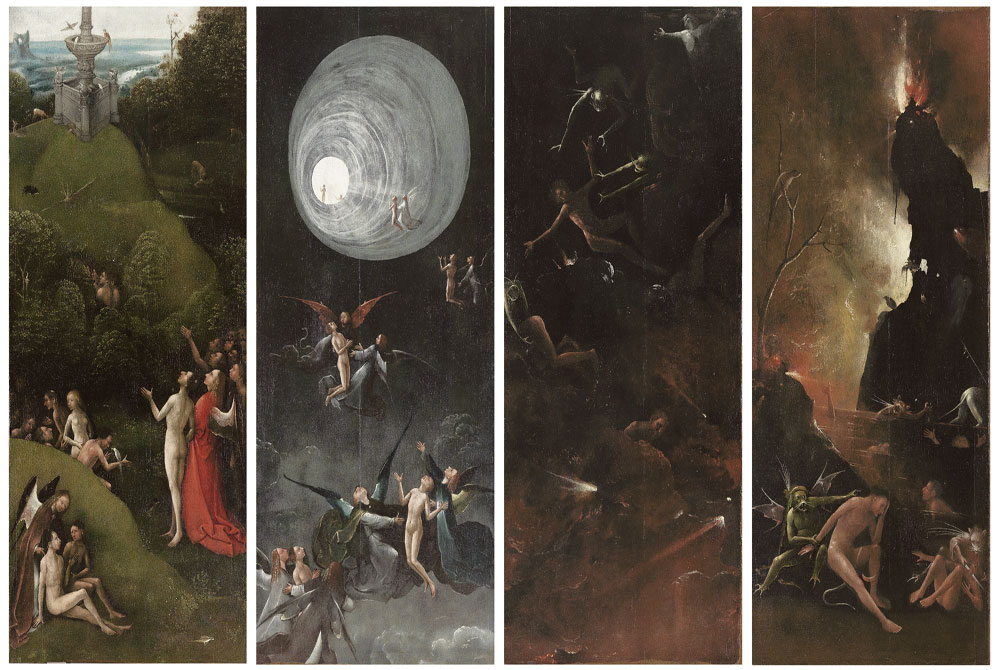 Jheronimus Bosch – Visions of a Genius is the highlight of the Bosch Year 2016, a unique event that marks the 500th anniversary of the most important medieval artist of the Netherlands.

Jheronimus Bosch – Visions of a Genius at the Noordbrabants Museum celebrates the 500th anniversary of one of the Netherland’s most extraordinary artists. From 1450 to 1516 the visionary artist (an almost exact contemporary of Leonardo da Vinci), known for his depiction of nightmarish dreams and bizarre horrors, lived and worked at a house on the edge of ‘s-Hertogenbosch’s market square, in the centre of the city also known as Den Bosch where the market square has changed little over the last five centuries.

It was here that Bosch (born Jheronimus van Aken) created his characteristic paintings on wood panels together with drawings, work of remarkable quality and power that has made Bosch world famous as the first artist to paint the surreal visions of a genius with a mysterious terrifying imagination.

The exhibition in the city of ‘s-Hertogenbosch brings together for the first time some of Bosch’s most famous masterpieces comprising 20 paintings, 19 drawings, various triptychs and panels many that are currently on loan from 20 institutions from ten countries including France, Italy, Germany, Spain and the USA. In the years preceding the exhibition a large number of the paintings have been studied and restored by prominent art historians, curators and restoration experts as part of the Bosch Research and Conservation Project.

Bosch’s oeuvre is a satire on the triumph of human folly in all its glory and beastliness, the triumph of evil in a medieval world of drunken carousing, adultery and incest, gambling and money lending, cruel animal baiting, which Bosch often depicts in a single work that shows a nightmarish vision of the damned, sometimes transmogrified into half-animal, half-fish, half-human creatures, as humanity slides inexorably to the eternal inferno.

This was no celebration of human folly, however; these pictures are one devout man’s passionate j’accuse, a bold statement: humanity’s choice is heaven or hell and just as Adam and Eve were cast out of the Garden of Eden for disobeying God’s strictures, so too will humanity be cast out of God’s medieval world forever.

Living as he did, far distant from Italian influences, Bosch’s insular world seems to have remained dark, with no light from the blossoming Renaissance entering his dramatically gloomy visions. However, in recent times it has been suggested by some authorities that Bosch visited Venice.

Mauro Lucco, a contributor to The Age of Van Eyck 1430 – 1530 (2002) writes, ‘… there are no records of northern artists in Italy until the presumed visits of Bosch to Venice in about 1494 …’, however, this presumption seems to be based on several of Bosch’s paintings being recorded as being in Venice by 1521.

Even in his own time Bosch was sometimes called ‘the Devil’s painter’, but in one sense, all Bosch’s paintings could be labeled as ‘religious paintings’ and, as a devote Catholic, his devotion shines through in paintings such as The Garden of Earthy Delights (a picture too fragile to be moved from its home in the Prado), and others with clear biblical references.

The painstaking research work of the Bosch Research and Conservation Project will result in a two-volume catalogue raisonné that will include technical analyses of each one of Bosch’s masterpieces. The same panel of experts are also recognized as the world authority on authentication and attribution with the result that two ‘new’ Bosch pictures, included in this exhibition, are revealed for the first time: The Temptation of St Anthony (Nelson-Atkins Museum, Kansas City, Missouri), and Infernal Landscape, a drawing from a private collection in Belgium. The information assembled by the BRCP has been made accessible to all via the website boschproject.org

The Bosch exhibition—a very rare opportunity to see these masterworks collected together—is currently running until 8 May, 2016. The cultural Bosch 500 festival continues through the year, brining together music, theatre, circus and art through performances and presentations in the region where Hieronymus Bosch himself lived and worked.