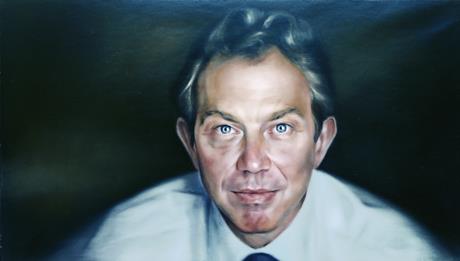 As the release of the commissioned art for the U.K.’s general election approaches, we take a look at the previous works that have marked these historic political moments.

Since 2001––the year the general election pitted Tony Blair, William Hague and Charles Kennedy against each other––the government has commissioned an artist to follow the campaigns of the differing parties in order to create an official piece of artwork to document the significant historical event.

This year that duty has fallen to Turner Prize winner Cornelia Parker. Parker, best known for her works Cold Dark Matter (1991) and The Roof Garden Commission (2016) is a highly conceptual artist known for creating both visual and verbal illusions in her work.

Parker will be the first woman to be commissioned for the General Election artist since the concept began. She stated she was ‘more interested in the people, not necessarily the politicians’ and hoped to attend at least one of each party’s campaign events and ‘get out of the big metropolitan centres’. She was also keen to emphasise there was room for humour. Parker will be the fifth contributor to the commission of election art.

While we wait with anticipation for Parker’s work to be released it’s important to look back on past works of art. Artists have taken a variety of different styles and forms when producing their official commission of election art—each piece a political landmark and an indicator of the era it derives from.

The commissioning of these pieces stipulates that the works remain politically impartial. Chosen artists are asked to focus on the overall sentiment the election connotes rather than the particular political intricacies that can often create bias or prejudice. They must also include a final product that can be displayed—or contain elements that can be displayed—as part of the official parliamentary art collection.

Beginning in 2001, Jonathan Yeo created three singular portraits of the running candidates; Blair, Hague and Kennedy. While this may seem like a lifetime ago, Yeo’s subtle intricacies take us back to just a year after the turn of the millennium. What, on the surface, may seem like a relatively straightforward concept provides hidden depths leaving hidden layers that may not be apparent on first viewing. The pieces, entitled Proportional Representation, represent the number of votes each candidate received with the size of each canvas—which left the Liberal Democrat candidate, Kennedy, looking somewhat small in comparison to Blair.

2005 marked the turn of another election and thus the commissioning of election art began again. This time the mantle was given to David Godbold. Thus far, Godbold is arguably the most controversial and provocative of the artists who produced work for this project.

He created 18 ink images, all self-titled but collectively known as Forward not Backward, depicting key moments from the campaign and the wider political discourse. One entitled Feeling litigious? depicted an abusive letter sent to the secretary of state at the time, David Lammy. The letter, along with a picture of Moses, alludes to the 227 promises made by Labour’s election manifesto. Godbold himself insinuated he felt censored under the constraints of producing a piece for the parliamentary art collection, and was concerned about not being able to show his work to the wider public.

Our political landscape took a noticeable change in 2010 with the election results bringing forth a Conservative/Liberal Democrat coalition government. This time around, the project was tasked to photographer Simon Roberts—the first photographer involved in the commissioning of election art.

His unique approach saw him hire out a motor home and travel across the country for the 24 official days of electioneering. He always shot from atop his vehicle to gain a broader view of the political proceedings as he noted that, too often, print and online photography focus on a more close-up vantage point. Roberts’ primary focus of the project was to shine a light on the relationship between politician and public. Accompanying his main body of work, Roberts also actively involved the public, encouraging them to submit their own photographs to theelectionproject.co.uk. This invitation gathered 1,696 images.

Adam Dant was the 2015 commissioned artist. As the Jerwood Drawing prizewinning British artist, he brought a unique vision to the project. Following the campaign around with his sketchbook, he drew key moments during the election campaign. It was important for Dant to focus on all seven of the parties during the campaign.

He situated himself in crucial moments both in and out of the public eye, such as when after Nigel Farage—strongly in the political spotlight for the first time—unveiled UKIP’s manifesto. Dant has now compiled his numerous sketches into one giant sepia ink drawing that is more than two metres in length.

Ensuring not to draw political favouritism, Dant has only represented the politicians by the podiums they stand on and the memorabilia they surround themselves with—you won’t find a sketched figure with a likeness to Milliband or Cameron in the drawing itself. Key incidents like the pandemonium provoked by UKIP in this election are signified by the clear media scrum surrounding and blocking the view of a UKIP figure surely meant to represent Farage.

Now our attention turns to our new, surprise snap election called by prime minister Theresa May. With u-turns ablaze and facts skewed from all the major parties, Cornelia Parker surely has a lot of material and inspiration to work with. But how will she choose to represent the country’s latest politically charged ceremony in her creation.

‘We live in scary but exhilarating times. The whole world order seems to be changing. As an artist, I feel honoured to have been invited to respond to such an important election. With all its challenging issues and complexity, it is an event that I’m excited to engage with, and I look forward to sharing my finished work.’