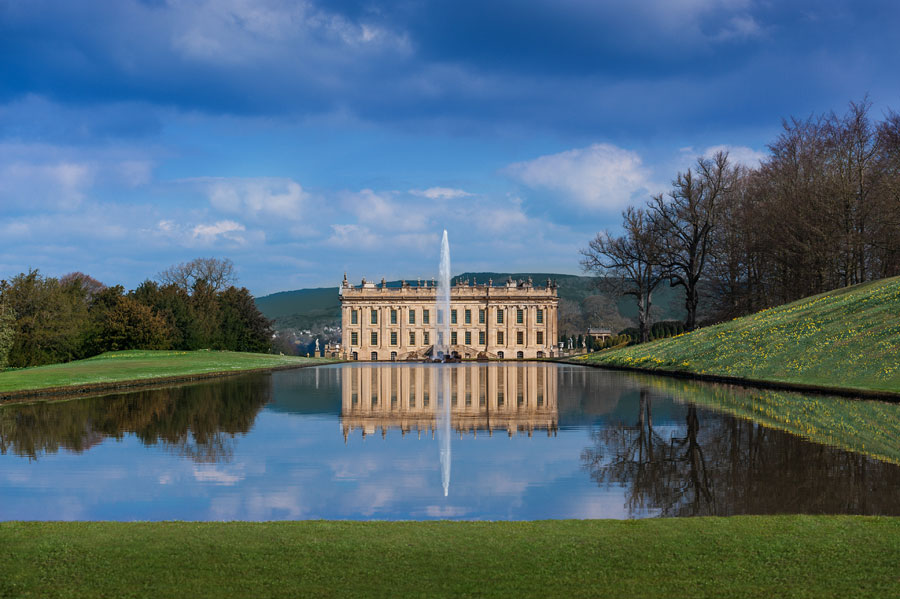 The treasures stored within Chatsworth House reveal the Cavendish family’s long-lasting tradition of collecting and their ambition to keep the manor’s magic alive.

Sixteen generations of the Cavendish family have occupied Chatsworth House and—over the centuries—nurtured the estate’s art collection and architecture. The iconic landmark is nestled in some of Derbyshire’s most beautiful countryside. It stands on the east bank of the River Derwent and backs onto extensive woodlands, rocky hills and steadily rising moors of heather.

At present, the 12th Duke and Duchess of Devonshire inhabit the stately home. The pair works closely with the Chatsworth House Trust to preserve its contents and 737 hectares of surrounding landscape. The ‘masterplan’ of the trust is to restore the weathered façades of the Baroque house, whilst improving visitor routes by enabling wheelchair access on all floors.

Carvings and stonework will be repaired along with the interiors of the house. This £32.7 million restoration scheme began in 2005; it is one of the most ambitious projects undertaken by the estate since 1828. The plan will also create additional room for future contemporary art displays—a particular interest of the Duke’s.

The house embodies a number of imaginative quirks and details commissioned by its various inhabitants over the years. One such example is a secret door that leads to the gallery level, which is disguised by the spines of joke book titles. Consenting Adults by Abel N Willing and Minor Rodents by Aygood-Mausser are some of the most notable volumes on the shelf.

Aside from the manor’s striking aesthetic—which is juxtaposed with the scenic backdrop—Chatsworth embraces some of the most exquisite artefacts in the country. These range from Elizabethan needlework and dazzling jewellery to Old Master drawings and 21st century sculptures. The assortment of treasures reflects the tradition of collecting that has been sustained by generations of the Cavendish family, thereby upholding their ancestral legacy.

Chatsworth’s Devonshire Collection brings together an eclectic medley of the family’s tastes and interests spanning over 400 years. In fact, it is one of the largest and most significant private collections in Britain. Portraiture makes up a large proportion of the artwork, with family members and historical figures being immortalised in paint.

There is a delightful contrast between classic and modern styles. Rembrandt van Rijn’s oil on panel, A Man in Oriental Costume (c.1639), couldn’t be more contrary to the stark simplicity in Michael Craig-Martin’s Digital Portrait of Lady Burlington (c.2011). This interplay of contemporary and traditional methods injects an essence of lightheartedness into the display. Offerings from other prolific painters such as Thomas Gainsborough, John Singer Sargent and Lucian Freud are also present.

Intricate family heirlooms of sparkling jewels and breathtaking metalwork are another point of interest for visitors. Guests can marvel at the Duchess Louise’s diamond coronet; set with rows of cushion-shaped diamonds forming the lotus design.

The stunning diadem was commissioned in 1893, a year after the Duchess’ marriage to the 8th Duke of Devonshire. The Duchess was admired for her style and the magnificent jewellery she wore. Chatsworth’s mixture of silvery also helps to communicate the story of the household’s occupants. A number of intriguing items can be viewed within the collection such as a cucumber slicer, Fabergé snuff box and perfume burner. These help to form a more accurate depiction of the Cavendish family’s curious tendencies.

Aside from being a destination for history lovers, Chatsworth House also plays host to a busy schedule of cultural events throughout the year. Major holidays such as Halloween, bonfire night and Christmas see the manor welcome performance acts and artisanal crafts for guests’ amusement.

Similarly, the mansion has accommodated some of the U.K.’s most impressive exhibitions to date. Lady Laura Burlington—wife to the heir of the estate—conjured up the idea for the most recent exposé, House Style: Five Centuries of Fashion at Chatsworth. The retrospective—which ran from 25 March until 22 October 2017—uncovered the history, intricate beauty and bewildering grace of the characters that lived in the lavish manor. Six years of planning resulted in the most extensive exhibition to grace the halls of Chatsworth—nearly every room in the large manor house was occupied with precious, historic items.

Attendees were amazed by the valuable outfits that ranged from stylish couture and livery to coronation robes. This brought to life the most illustrious and influential characters from the Cavendish family, demonstrating the power of their fashion statements. It painted a timeline from the founding of the house in 1552 leading all the way to the vibrant 90s. Icons featured within the exhibit included Bess of Hardwick, a key influencer during the 16th century; the Duchess of Devonshire; Georgiana Cavendish, who was also known as the ‘empress of fashion’; and Adele Astaire, the relative and dance partner of Fred Astaire.

At a glance, Chatsworth House poses as a historic beacon of heritage—a place untouched by time. But, under closer inspection, one can see the lasting effect of modern influence and the grand initiatives aimed at reviviving the estate.

If you have enjoyed reading this article, click here to read more on Arts & Collections about Chatsworth House.