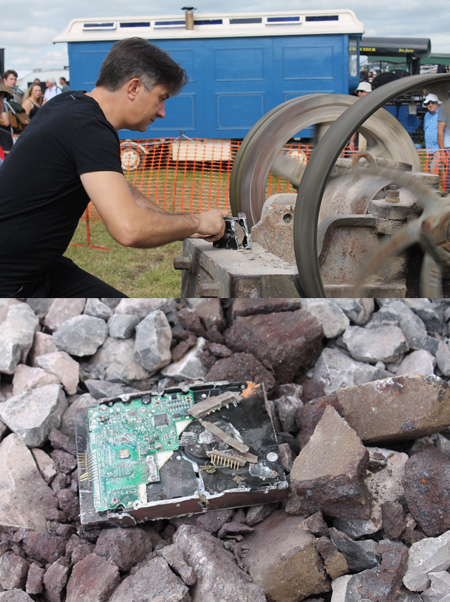 In a dramatic final farewell to the novelist, Terry Pratchett’s hard drive containing his unfinished works has been crushed by a steamroller—it was his wish for anything he hadn’t completed to be destroyed after his passing.

The deed was done at the Great Dorset Steam Fair by a vintage John Fowler & Co steamroller. To make sure it was properly destroyed, Terry Pratchett’s ex-assistant Rob Wilkins had it rolled over several times by the six-and-a-half tonne steam roller and then put through a steam-powered stone crusher.

According to Terry Pratchett’s close friend, Neil Gaiman, he specifically asked that ‘whatever he was working on at the time of his death to be taken out along with his computers, to be put in the middle of a road and for a steamroller to steamroll over them all.’

Richard Henry, curator of Salisbury Museum, said: ‘The steamroller totally annihilated the stone blocks underneath but the hard drive survived better than expected so we put it in a stone crusher afterwards which I think probably finally did it in.’

The hard drive was thought to contain up to 10 unfinished novels. Its remains will be displayed at a new exhibition on the late author—Terry Pratchett: HisWorld.

Whilst many fans despaired to see the work lost, Terry Pratchett decided that his notes and incomplete works were not for public view.

Terry Pratchett passed away in March of 2015 after a long struggle with Alzheimer’s disease. He continued to write until his death and two novels were published posthumously as chosen by him: The Shepherd’s Crown and The Long Utopia.

He was the author of over 70 novels and was an advocate of assisted dying. He presented a BBC documentary, Terry Pratchett: Choosing to Die, which won the Scottish BAFTA for Best Documentary in 2011.

His novel Good Omens—a collaboration with Neil Gaiman—is to be made into a six-part television series for Amazon and BBC 2. It is set to be released in 2018 and will star David Tennant as demon Crowley, and Michael Sheen as angel Aziraphale.

The exhibition Terry Pratchett: HisWorld will run from 16 September 2017 to 13 January 2018 at The Salisbury Museum. To find out more visit pratchetthisworld.com