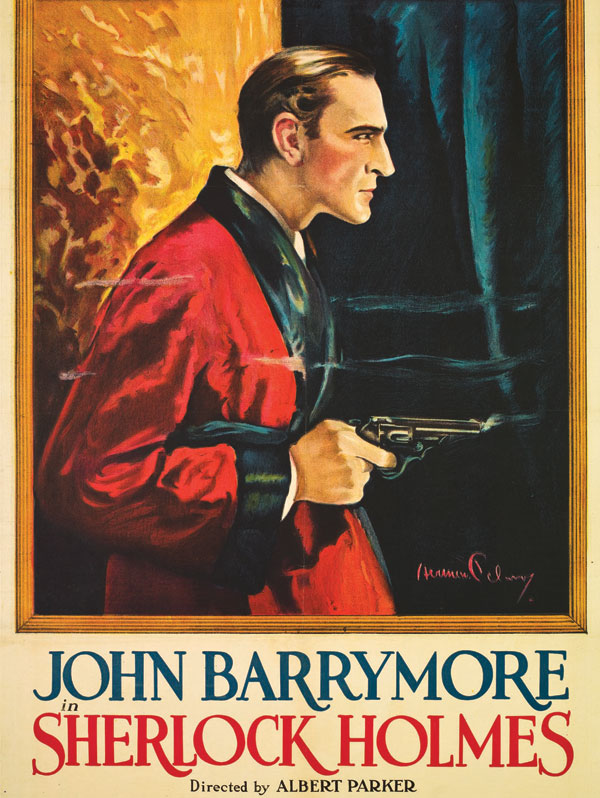 Through vintage movies we enter a glamorous world that has captivated audiences for generations. When Ira M. Resnick visited London recently to launch his new book, Starstruck: Vintage Movie Posters from Classic Hollywood, it was an opportunity to meet with one of the greatest collectors of vintage movie memorabilia.

The drama, the suspense, love and passion, true grit … this great tide of human emotion is all depicted in those classic movies we love so much and in the vintage movie posters that were designed to draw in the huge cinema audiences of the last century. In our digital-driven age the appeal of these vintage movie posters seems ever stronger, giving us that unique flavour of the twenties, thirties, forties and fifties, in particular, and putting us close up to that cult of celebrity, the film stars of bygone times.

Probably the world’s greatest collector of vintage movie posters, Ira M. Resnick, is the authority our biggest auction houses have turned to for advice. At the time he founded his own gallery in New York, the Motion Picture Arts Gallery, he was a professional photographer.

It was the first gallery to be devoted exclusively to the art of the movies. He is also a Trustee of the Film Society of the Lincoln Center as well as the International Center for Photography and MUSE Film and Television. He flew in to London recently for the launch of his book, Starstruck: Vintage Movie Posters from Classic Hollywood, an impressive volume (with a foreword by Martin Scorsese) displaying many of the treasures of his collection and describing his personal journey in creating the collection. We met and talked.

‘The great film era for me,’ says Ira M. Resnick, ‘is from 1912 to 1962. Sixty-two and onwards saw that new era of movies, especially in Britain – “social realism” – Room at the Top, Saturday Night and Sunday Morning, and so on—films I love, but my heart has always been in that earlier romantic era.

For me it goes back to the stories I read as a kid or that were read to me and were very meaningful—The Count of Monte Cristo (incidentally, my father’s favourite), Robert Louis Stevensons’s adventure yarns, and then as I got a little older the romance side of it appealed.’ And Ira M. Resnick introduces a philosophical note here by saying ‘… the kind of love that screws up a lot of people because they’re looking for movie love rather than real love.’ He goes on to admit that the core of his interest is in being able, through film, to go back to an age of a different reality. ‘But even the fifties was a bit of a wasteland in some ways. I do love the stars I talk about in my book—Marilyn Monroe, Audrey Hepburn, James Dean and Marlon Brando.

But my feelings about them (with the exception of Hepburn) is that I don’t love them in quite the same way as I love the older ones.’ Why so? ‘I think it’s probably the fact that the earlier stars were the stars of my mother’s era—not to get too Freudian about it—and perhaps this has had some influence on me.’

Even earlier, Ira M. Resnick had had a baseball card collection and from this he learnt a dramatic and unforgettable lesson: ‘When I went away to college I returned one day to find my mother had thrown out the cards! I was not happy about it! But that’s an American story that happened to a lot of boys, and you get over it. What I learnt from that was, never let anyone else be in charge of your collection.’

Along with vintage movie posters, the serious collector will also have a keen interest in lobby cards—these are sets of cards (a title card and seven ‘scene’ cards) depicting specific scenes from the film that would be placed in the cinema lobby or foyer.

In terms of value, the range is surprisingly large, with some big price hikes in the last ten years, while some film memorabilia still remains very affordable. ‘The good material went up maybe ten years ago … Warner Brothers stars like Bette Davis, Errol Flynn…these cards are worth about the same as they were twenty years ago, but then at the top end, a one-sheet [a poster] of Bette Davis in Jezebel (1938) would go for maybe $28,000-30,000 whereas ten years ago you might have bought that for $10,000-15,000.’

From Ira’s infectious enthusiasm for his subject, it’s soon clear that collecting can become an obsession. ‘Absolutely! It’s a madness! I’ve committed a lot of my life to it and “committed” is probably a good way to describe it. I probably should be committed myself for doing it.’

For those about to commit to vintage movie poster and card collecting, Ira says there are still great opportunities: ‘Yes, especially for the younger collectors who may be less interested in the old films or stars I talked about earlier. There are very nice pieces to be had of Jack Nicholson, Clint Eastwood, Meryl Streep—I can think of the cards for The Great Gatsby, for example, mid-seventies stuff, they’re beautiful. I think that’s one way to go to start a collection today.’

Although Ira M. Resnick has now stepped back from the management of his gallery, The Moving Picture Gallery, it remains a prime resource for collectors with, of course, much of today’s business being done online. Ira M. Resnick stresses he’s always been a collector first and foremost and being a dealer was very much secondary. ‘I reached a time in my life where I was involved in a lot of different things, so one day I stopped and asked myself, what do I really want to concentrate on, what’s my passion?

So that was really the beginning of the gallery, which, to start with, was more a kind of salon where you could go and talk about the stuff, have a drink and so on. I wanted people to be able to come to me with material and also for them to see a lot of different material. The dealing part is not really part of my soul but at the time it was something I needed to do in order to see more material—and I liked the schmoozing and talk that went with it, and I still like talking about it!’

One way of ‘talking about it’ was to write the vintage movie poster book which became Starstruck, which has taken two-and-a-half years in the making. ‘I’d built this wonderful collection and I was trying to work out how to do the book, I didn’t want it to be just a poster book. I thought about a documentary, a boys’ adventure story, weaving in and out of history through the posters. But after much thought it became the story of my personal journey.’

By any standards, Starstruck is an extraordinarily detailed book. It brings to life Ira M. Resnick’s movie knowledge and his passion through his firsthand account of the evolution of his world-class collection of vintage movie posters and stills. It’s a lively and entertaining account of the greatest film era, with superb reproductions of 258 posters and 28 stills from the golden age of Hollywood.

So, is that the end of the story, has Ira M. Resnick’s reel of film clattered to a halt? Almost certainly not. What Ira M. Resnick reveals is that he has a huge stash of his photographic work from his California days in the seventies. And when we hear his photographic themes back then were rock ’n’ roll and celebrities of the time, no doubt there’s another great book on the way.

NEW YORK – The Motion Picture Arts Gallery was founded (1982) on the belief that motion picture art is timeless and enduring. The website offers the entire galleries’ inventory of thousands of original movie posters and lobby cards spanning 100 years of cinema.

LONDON – The Reel Poster Gallery owners say, ‘Our collection is hand-picked based on aesthetic criteria and therefore offers a diverse range of imagery. Our selection is not governed by any bias towards a poster’s country of origin. In short, our emphasis is on design.’ The gallery owners stress they do not deal in reproductions.