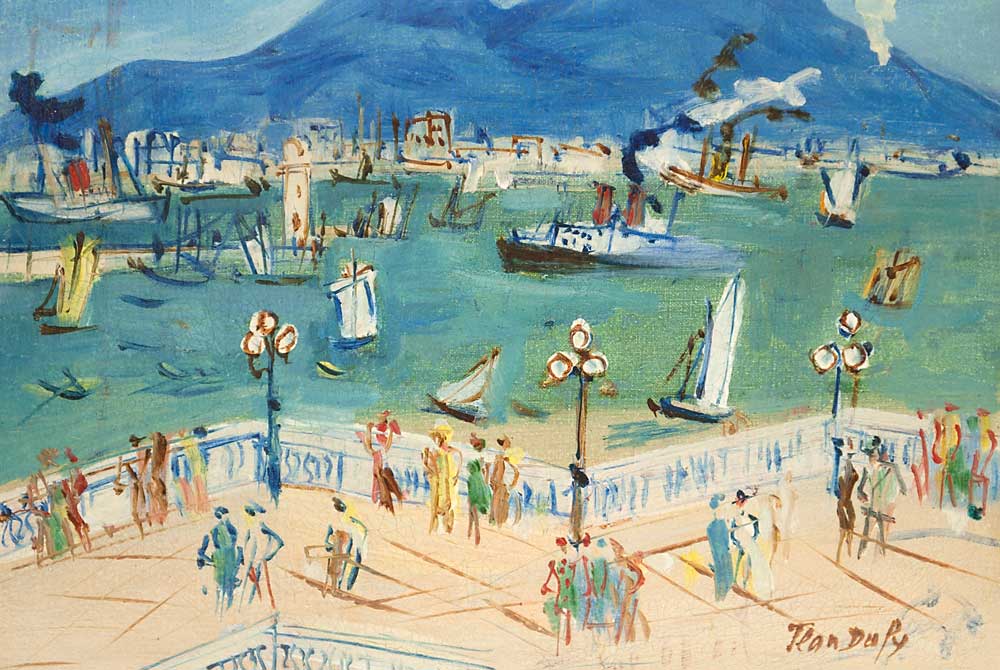 Entering BRAFA (Brussels Art Fair) feels a little like stepping into a rejuvenating world of art, where beauty vies with rarity and where precious objects compete with illustrious works. A visit to BRAFA is an opportunity to meet 131 Belgian and international exhibitors who have painstakingly compiled their most beautiful items to appeal to collectors and art enthusiasts in search of rare and authentic works. For a period of ten days, from 25 January to 2 February, beauty takes up residence in Tour & Taxis, unveiling its diversity of forms, styles and ages. Fasten your seatbelts for a journey to the heart of the art world!

In addition to its very high quality standards, what distinguishes BRAFA from other such gatherings is a clear preference for a harmonious blend of styles and eras. While some fairs choose to bring together exhibitors specialising in the same area, BRAFA prefers a more diversified approach so that visitors get a multi-facetted overview of tastes, eras and artistic expressions. In doing so, the organisers’ ultimate aim is to showcase a wide spectrum of exhibits, holding visitors’ attention with one outstanding example after another as they make their way around the Fair.

The exhibitors have also taken the greatest care in selecting their featured works, promising some exciting new discoveries in all the specialized areas represented at BRAFA. Let’s take a short, but by no means exhaustive, tour of some of noteworthy exhibits that definitely will catch the experts’ eye…

Boosted by the presence of the Royal Museum for Central Africa as a Guest of Honour, specialists in this discipline are vying to present the rarest objects, from a Nzakara-Mangbetu harp made of wood, hide and plant fibre from the Congo at Didier Claes (no. 24); an anthropomorphic Zou mask from the Ivory Coast at Jacques Germain (no. 84); a statue representing Tshibinda Ilunga, the mythical hero of the Chokwe people (Angola, late 19th-early 20th century) at Galerie Bernard Dulon (no. 93); a Mahongwe reliquary figure from Gabon, 19th century, at Galerie Schoffel-Valluet (no. 127), not forgetting a thematic exhibition “Vodun Fon: between art and matter” and an exceptional ulifigure from New Ireland at Serge Schoffel (no. 17).

De Backker Medieval Art (no. 36) is presenting two outstanding exhibits: a triptych of Saint Michael from the South of Spain, dating from middle of the 15th century, and a pair of gold Byzantine bracelets set with lapis-lazuli, pearls and glass, 5th-7th century AD. Not forgetting a delicate Madonna with Child sculpted from lime wood in 1480 in Ulm, at Elmar Robert Medieval Art (no. 31). Mullany has a very refined Saint Agnes in poplar wood sculpted around 1420 in Salzburg.

Epoque Fine Jewels (no. 82) is presenting an outstanding Art Nouveau “plique à jour”, gold, enamel, emerald, opal, diamond and pearl pendant signed by L. Gautrait and dating from 1900. At Galerie Montaigne (no. 123), highlights include a 31-carat briolette diamond, and at Bernard Bouisset (no. 116), a 240 carat diamond necklace.

Egyptian art enthusiasts will love a large pharaoh’s head from the New Kingdom (13th-11th century BC) at Phoenix Ancient Art (no. 90), as well as a little blue earthenware figurine from the Middle Kingdom at Galerie Harmakhis (no. 76), which is also exhibiting a very rare glass lion’s head from the Achaemenid period (Iran, 5th-6th century BC). From the Roman era, noteworthy exhibits include, at David Ghezelbash(no. 83), a coloured mosaic depicting a cockerel and a quail (1st century BC/1st century AD); at Galerie Chenel (no. 65), a relief depicting a mule loaded with provisions, a rare scene in the Antiquity genre (2nd-1st century AD), and at Tradart (no. 119), an aureus, a very rare gold coin struck in 231 AD under the reign of Alexander Severus. On the other side of the Atlantic Ocean from which it came, a conch engraved with a human face, of Mayan origin, Mexico, and dating from between 550 and 850 AD numbers among the highlights on the Galerie Mermoz (no. 2) stand.

At Pierre Segoura (no. 96), a pair of flasks or water jugs, known as Khendis, from Japan, late 17th century. A group of five musicians made from salmon terracotta from the Tang Dynasty (China, 618-906) can be admired at Eric Pouillot (no. 107). Tanakaya (no. 77) is presenting a red lacquer cabinet from the Meiji period (Japan, circa 1878).

Furniture and Works of Art from the 18th and 19th Centuries

At Galerie Steinitz (no. 92), visitors can view a two-drawer chest with cross-piece, oak housing, rosewood and amaranth veneer, bearing the stamp of Pierre Garnier, Paris, circa 1765-1770. Costermans (no. 32), which is celebrating its 175th anniversary and its first appearance at BRAFA, is presenting exhibits including a monumental Italian cabinet from the 19th century, made from gilt wood with bronze trimmings. Equally monumental, at Dario Ghio (no. 9), a large Viennese iron safe dating from the third quarter of the 19th century.

Rodolphe Chamonal (no. 129) is presenting a very rare complete collection celebrating a victory of Leopold I over the Ottomans in Brussels by Romeyn de Hooghe, circa 1686. Sanderus Antiquariaat (no. 40) is showing a Sea Atlas or Atlas of the Aquatic World by Pieter Goos (1616-1675), a true monument of ancient cartography.

At the Pavillon de la Céramique (no. 134), Jean Lemaire is presenting a large earthenware piece from Brussels depicting a serpent woman from the middle of the 18th century, while another dealer from Bruges Marc Michot, is showing two blue and white vases from the Kangxi era (1662-1723).

Belgian painting is a field that is increasingly attracting interest and will be featured by several galleries. Harold t’Kint de Roodenbeke (no. 94) is presenting many works by Paul Delvaux, as well as a rare oil on canvas by Hergé, dating from 1963. Francis Maere (no. 57) is introducing a retrospective entitled “50 years of Belgian art” featuring works by Claus, Lemmen, Van Holder, Khnopff, Gailliard and Frits Van Den Berghe, which will later will be on exhibit in the gallery in Ghent. A painting of a peasant scene signed by Gustave Van de Woestijne (1881-1947) entitledTrees (1907), deeply intriguing, sits alongside a bright canvas by Emile Claus (1849-1924), entitled Repos de midi (Noon break) (1890), atOscar De Vos (no. 26). James Ensor and Pierre Alechinsky feature at Jos Jamar (no. 63) where Portrait de Monsieur et Madame Rouart(sketch on paper) by Edgar Degas (1834-1917) dating from 1904 is shown. An enthralling series of Inuit paintings at Philippe Heim and James Bauerle (no. 110) are not to be missed; the vibrant polar light escapes the limits of the frame. Another highlight is a watercolour and gouache painting from 1880 by Paul Gauguin (1848-1903) at Galerie Fleury (no. 73).

The growing number of amateur artists working on paper will be delighted by an exceptional collection of drawings by Andy Warhol at Galerie des Modernes (no. 74), alongside Portrait of a girl in charcoal from 1918 by Egon Schiele (1890-1918) at Galerie Kovacek (no. 11), Small abstract head, a watercolour by Alexej von Jawlensky (1964-1941) and a very rare small gouache by Georges Vantongerloo (1886-1965) at Galerie Jörg Schuhmacher (no. 89) and Motherhood, a watercolour by Marc Chagall (1887-1985) from 1946 at Galerie Taménaga (no. 80).

Jean-Jacques Dutko (no. 71) presents a semi-circular desk by Paul Dupré-Lafon in black varnished wood from 1935. At the Futur Antérieurstand (no. 14), a unique brass sculpture by Dietrich-Mohr, la Montée lente (Slow climb) from 1972 is on show. Galerie Mathivet (no. 62) combines contemporary aboriginal paintings with the furniture of J-E Ruhlmann (1879-1933) and André Groult (1884-1966). After many years of research, Marc Heiremans (no. 66) has amassed an exceptional collection of glass creations from the manufacturer Seguso Vetri d’Arte (Murano), which does no longer exists; certain unique pieces were commissioned by MOMA. Also from Italy, a sofa curvato in the style of Ico Parisi (1916-1996) from the 1950s is on show at 88-Gallery (no. 69). More contemporary pieces include an Italian bookcase in varnished rosewood and walnut from 1959 and a table by Ado Chale, the table top made from black resin inlaid with petrified wood, from 1983, presented by Pierre Mahaux (no. 20).

Final highlights include an Antwerp tapestry with a grotesque and hunting scene (circa 1580) at Dewit Fine Tapestries (no. 22) and a resplendent Ushak carpet dating from 1900 at N. Vrouyr (no. 104).

A new feature at the 2014 Fair is a series of daily conferences with free admission for visitors. These will cover, amongst others, the rediscovery of a forgotten Magritte, an exciting investigation about a drawing attributed to Leonard da Vinci, the surprising results delivered by applying infrared reflectography to the works of Hyeronimus Bosch and the discoveries made by present-day treasure hunters – not to be missed!