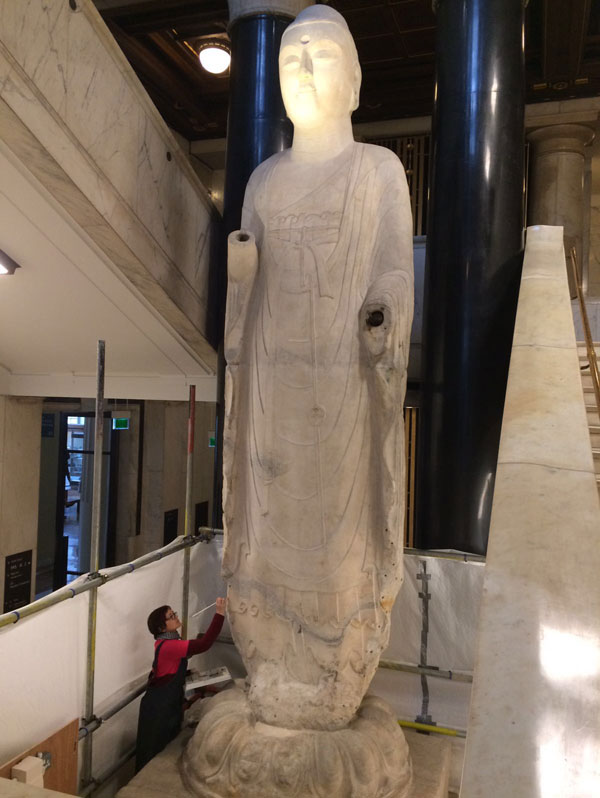 The lengthy restoration of the British Museum’s famous Amitābha Buddha has recently been completed, giving visitors access once again to this vast and venerable masterpiece.

Are you familiar with the jujube tree? Possibly not, because this is a very rare tree that has been cultivated in China for over 4,000 years for its edible fruits rich in vitamin C.

Some 1,400 years ago it was not the Vitamin C that Chinese craftsmen were after, they found another use for their local jujube tree—using timber from the jujube tree they constructed the arms of a vast and magnificent statue of the Buddha, a marble and wood sculpture that today is one of the highlights of the British Museum’s collection.

A painstaking restoration of the Amitābha Buddha has recently been completed, courtesy of funding from Bank of America Merrill Lynch, and it was during this restoration that the conservation department also undertook scientific identification of the wood used in the arms of the Buddha. Using scanning electron microscopy, the team identified the wood in the left arm of the Buddha as Ziziphus jujuba, jujube tree.

If you enter the North Entrance of the British Museum (from Russell Square), you will meet the inscrutable gaze of the 5.78-meter Buddha on the North stairs. It is this particular placement of this colossus that caused the conservation team a headache due to the physical inaccessibility. However, with this problem overcome, conservators used scaffolding to enable the examination of the Buddha’s surface condition, rectifying the dust build-up and discoloration through careful cleaning, together with any necessary repairs, with additional restoration ensuring improvement to the statues plinth and lighting conditions.

British Museum experts have, for the first time, been fully able to read an inscription on the plinth of the Amitābha Buddha. The script names the Buddha’s original location in Chongguang Temple in what was then Hancui Village, Hebei Province, Northern China.

It also names eighty members of the Yi-yi, a Buddhist society that was very popular during the northern dynasties, who originally patronized the building of this Buddha. These same Buddhists also built two white marble bodhisattvas, one of which is now in Japan. Bodhisattva is the Sanskrit term for ordinary men and women whose compassion for others develops so strongly that the individual reaches a state whereby their compassion for others and for the happiness of others becomes the basis of all their actions.

This awe-inspiring statue represents the Buddha Amitābha, the Buddha of Western Paradise. The hands of the Buddha are now lost but the British Museum’s experts tell us that, originally, the right would have been raised, palm-outward in the Buddhist gesture of reassurance (abhaya mudra), the left lowered in the gesture of liberality (varada mudra). Carved in sharp relief with a flat back, the figure has a very solid form and drapery in flat folds, typical of the Sui period.

How the Amitābha Buddha finally came to rest at the British Museum is itself a fascinating story. The Buddha was previously displayed in the International Exhibition of Chinese Art, hosted at the Royal Academy between November 28, 1935, and March 7, 1936.

The exhibition had been proposed by a group of British collectors led by Sir Percival David as a result of growing international enthusiasm for Chinese art, and was organised in partnership with the Chinese Ministry of Education. More than 780 works were put on shown from the Chinese government’s collection, together with 3,100 pieces from 240 international collections. The Amitābha Buddha was one of the highlights of the exhibition that was staged in the Royal Academy’s central hall.

The magnificent statue was sent to the Royal Academy by C.T. Loo, a prominent Chinese art dealer of Chinese origin who had art galleries in Paris and New York. Loo gifted the Buddha to the Chinese Government, who then donated it to the British Museum in 1938 following the Royal Academy exhibition.

Acknowledging the support from Bank of America Merrill Lynch that has made this restoration possible, Jane Portal, Keeper of Asia at the British Museum said, ‘The Amitābha Buddha is a powerful sculpture with a long history in China and a more recent story in the UK.

We are extremely grateful to Bank of America Merrill Lynch for their support. Their Art Conservation Project has made possible both conservation treatment to beautify this important Buddha, and scientific research into the materials and production behind it. The physical accessibility of the statue has prevented this kind of comprehensive analysis and cleaning until now.

Andrea Sullivan, Corporate Responsibility Executive for Europe, the Middle East and Africa at Bank of America Merrill Lynch, said, ‘We are proud to continue our support of the British Museum by helping to conserve this important piece of history, the Buddha Amitābha, for the learning and enjoyment of future generations.

Our Art Conservation Project is designed not only to conserve artworks, but also to educate communities and to help ensure understanding and respect for the varied cultures and traditions throughout the world.