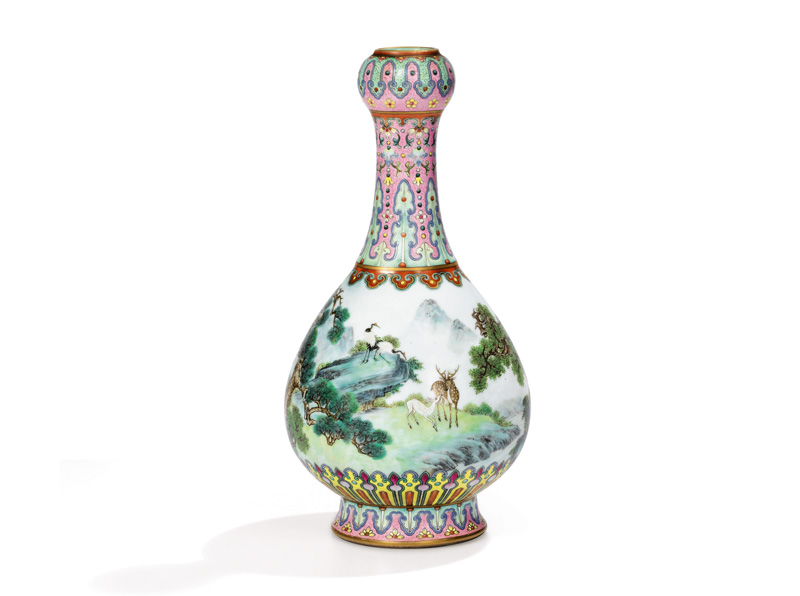 It is the highest price ever reached by a single item sold by Sotheby’s in France.

The vase was part of a family’s inheritance and was discovered in an attic.

Sotheby’s Asian art expert, Olivier Valmier, said: ‘The seller took the train, then the metro and walked on foot through the doors of Sotheby’s and into my office with the vase in a shoebox protected by newspaper.

‘When she put the box on my desk and we opened it, we were all stunned by the beauty of the piece.

‘This is a major work of art,’ Valmier continued. ‘It is as if we had just discovered a Caravaggio.’

Henry Howard-Sneyd, Sotheby’s chairman of Asian Art in Europe and the Americas, commented: ‘Chinese art has been admired and collected across Europe for centuries, but the importance of certain pieces is occasionally lost over time. Given the huge appetite for Chinese art among today’s collectors, now is the moment to scour your homes and attics and to come to us with anything you might find.’

The 30cm, bulb-shaped Chinese vase, painted in shades of green, blue, yellow and purple, is an exceptionally well-preserved porcelain vessel made for the emperor of the Qing dynasty.

The 18th century ‘Yangcai’ Famille-Rose porcelain vase bears the mark of the Qianlong Emperor (r.1736-1795). When Sotheby’s specialist Olivier Valmier studied the object, he was immediately overwhelmed by its quality and well-kept condition. Further research found the piece to be extremely rare—a unique example of the finest craftsmanship of the age.

The vase depicts deer, birds and other animals in a wood and includes gold embroidery around its neck.

The vase, which was in perfect condition, ‘is the only known example in the world bearing such detail,’ said Valmier.

‘We didn’t like the vase too much, and my grandparents didn’t like it either,’ said the owner of the piece, who only got in touch with Sotheby’s in March.

A Sotheby’s spokeswoman said: ‘They knew it had some value but nothing like that, nor that it was from the Qing dynasty.’

The auction lasted approximately 20 minutes, a long time by usual standards, with multiple bidders battling for the vase.

Sotheby’s has not revealed the name or nationality of the Asian buyer.