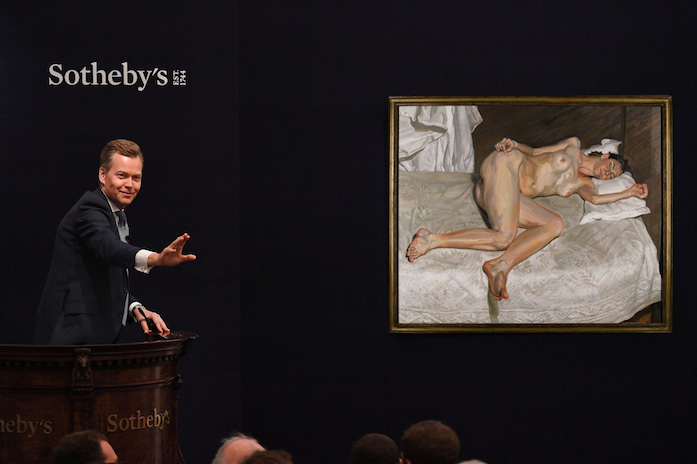 It was the highest price ever paid for a Lucian Freud work on British soil, beating the artist’s previous record of £16.1m set by Pregnant Girl (1961) at Sotheby’s in February 2016.

A late masterpiece, Portrait on a White Cover—painted when the artist was 80 years old—represents the culmination of Lucian Freud’s lifelong engagement with the reclining nude. The oil on canvas work has a sculptural quality—an Italianate mood driven by Freud’s extraordinary rendering of his sitter’s legs. Delicately folded, they seem to extend out towards the viewer and hover in space, almost puncturing the picture plane.

At the stage in his career when he completed the masterwork, Lucian Freud had already achieved the most highly esteemed artistic accolades—in the 2000s alone, he was the subject of exhibitions at the Venice Biennale, the Tate, the Centre Pompidou, the Museum of Contemporary Art in Los Angeles and London’s V&A Museum. His coterie of sitters was similarly illustrious: the Queen, Kate Moss and David Hockney, to name a few.

In his old age, Lucian Freud refused to succumb to a late style. His work never softened or loosened and he pursued with rigorous fervour the urgency, subtlety and concision that he had honed throughout his long career. Portrait on a White Cover wonderfully encapsulates the notion of his enduring stylistic licence and unique interpretation of the portraiture canon.

Alongside the self-portrait, the reclining nude was the defining leitmotif of Lucian Freud’s career. Across 60 years of painting, innumerable mutations of painterly style and a multitude of sitters, he returned to this challenging subject time and again. Portrait on a White Cover represents the pinnacle of this endeavour.

The painting comes from a private collection and has been exhibited in Dublin’s Irish Museum of Modern Art, London’s Wallace Collection and the Gemeentemuseum Den Haag in The Hague.

Portrait on a White Cover depicts Sophie Lawrence, who worked for Tate Publishing and was spotted by Lucien Freud whilst preparing for his Tate retrospective in 2002. This is her only known portrait and there is little written about her in the literature surrounding the artist’s work.

She is tangential to the legend of Lucian Freud in the 2000s, which was played out as much in the British tabloid press as in his biographies. However, her slight remove from the oft-told narrative of the artist’s later years allows for a more unencumbered reading of this painting.

The fact that Lawrence was not one of the artist’s lovers, children or celebrity friends means that—in viewing this work—we are afforded no prejudice or bias. In its appreciation, we are better reminded of one this artist’s greatest contributions to the genre of portraiture.

Ahead of the Sotheby’s sale, Lawrence shared her story of sitting for the artist: ‘I wouldn’t have done it for anyone else, but he is one of the best artists who has ever lived. It was incredibly intimidating, but he made me feel at ease. He was very good at building a rapport with people. I was very fond of him.’