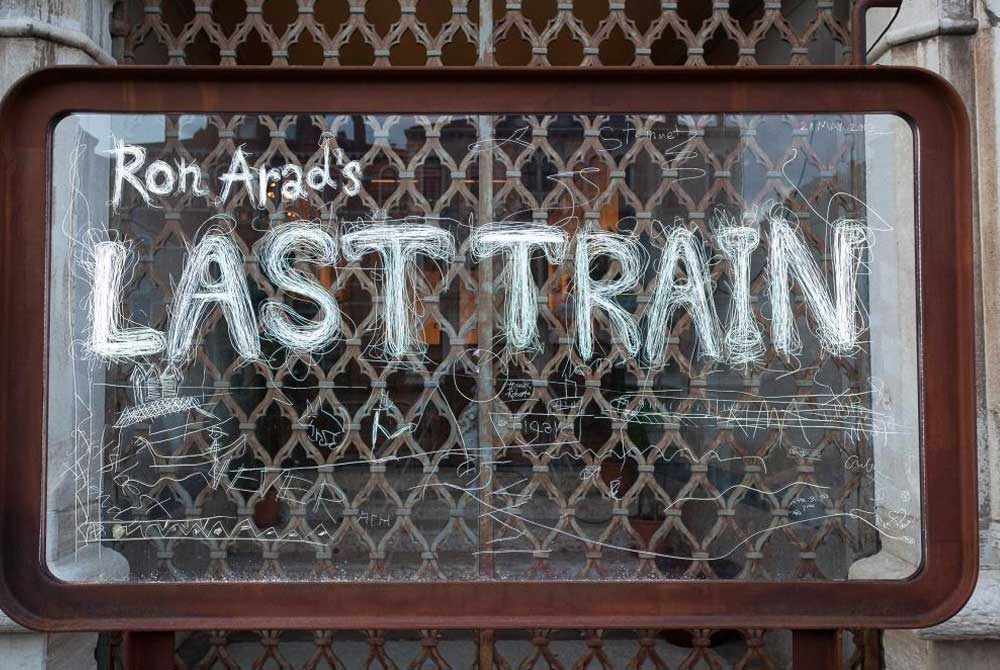 An exhibition of Ron Arad’s Last Train project will open on Thursday 27 June 2014 at Ron Arad Studio in Camden, London. New works for 2014, as yet unseen by the public, will join the collection that was unveiled at the Venice Art Biennale in 2013.

Ai Weiwei was able to create his piece over the internet while under house arrest in Beijing, owing to the digital technology of Arad’s Last Train apparatus, which enables collaborations with artists anywhere in the world in real-time.

The LED-illuminated engravings begin with the participating artist sketching on an iPad. The marks are interpreted in real-time by the Last Train app and sent to Arad’s disembodied mechanical fist, which, bearing a Diacore diamond ring, scratches the design onto a large pane of glass.

A satellite of Last Train is at the Royal Academy’s Summer Exhibition, until 17 August. The single pane on display reveals the moment of the project’s inspiration, in which Arad narrowly missed the last train from Naples and saw in a departing window the scratching of a diamond ring on glass, creating mesmerising drawings. “It reminded me of the images of Picasso drawing with a match in the air,” Arad’s engraving reads. “Although I didn’t know how I would get out of Naples that night, I felt like I was compensated … by witnessing some beauty that no one else had seen before.” Arad was elected as a Royal Academician in 2013.

Ron Arad says: “It’s amazing to watch how each artist took to it in such a different way – from a self portrait, to some totally abstract scrawlings, to conceptual art. The spontaneous effect is interesting. People have to turn their hand to the iPad, and stick with the piece as it scratches in real-time on to the glass. There’s no going back; no rubbing out or painting over. The whole project is a sort of train, which set off from Venice and has collected a few more passengers on the way. While it stops in London, people can come and see the whole collection together.”

Lior Levin, of Diacore, says: “The unfolding of the various art works is a fascinating discovery of what can be created in the magical combination of technology and diamonds.”

Subverting the association of diamonds with luxury, Last Train responds to the toughness of these rare rocks, and the strength of the messages they have sent over history. Since the advent of glass panes in the 16th century, diamonds have scratched messages of love, hate, pain and rebellion. Elizabeth I engraved love vows on bottles and jars with her ‘promise ring’ or ‘scribbling ring’, and Robert Burns wrote poems on glass panels with a diamond-tipped pen. The craft is perpetuated by train passengers the world over, whose messages and drawings on windows express desire and dissent in this enduring form of mark making.