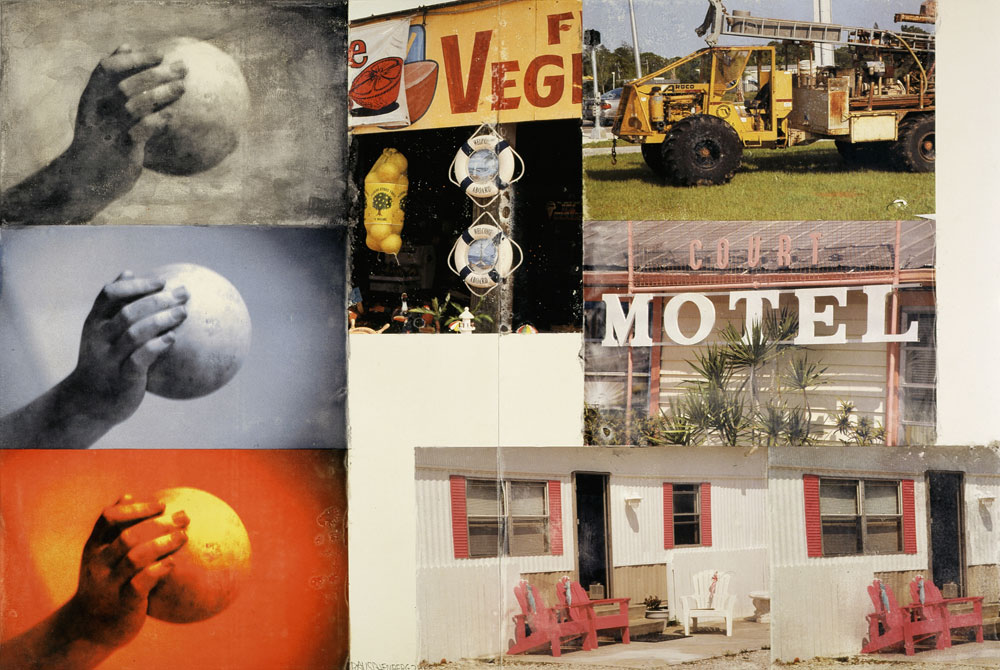 Inventive, prolific and daring, Robert Rauschenberg was one of the giants of American art in the second half of the 20th century.

Endlessly innovative, he flitted between painting, sculpture, print-making, stage design and performance and was particularly well-known for his imaginative use of materials, creating pieces that interrogated the boundaries between what was and wasn’t art. From 1 December 2016 to 2 April 2017, Tate Modern is staging the first major U.K. exhibition of Robert Rauschenberg’s work in 35 years, and the first retrospective of the artist since his death in 2008.

‘Rauschenberg saw the experience of art as inseparable from the experience of life and so made work from all sorts of materials—textiles, cardboard boxes, car parts, radios and even stuffed animals,’ commented the show’s curator and director of exhibitions Achim Borchardt-Hume. ‘Rauschenberg exploded the myth of the artist working isolated in the studio and revelled in making connections between the stuff of the world and the materials and strategies traditionally associated with “high art.” He blazed a new trail for art in the second half of the 20th century and became a beacon for other artists for generations to come.’

The exhibition will chart Robert Rauschenberg’s storied six-decade career, starting with his early experiments at Black Mountain College in the late 1940s and early 1950s, where he mingled with the likes of John Cage, Merce Cunningham, Jasper Johns, David Tudor, Cy Twombly and Susan Weil. Rauschenberg’s work with Experiments with Art and Technology (E.A.T) in the 1960s, an organisation he created to encourage partnerships between artists and engineers, will also be explored.

In the early 1970s Rauschenberg moved his studio to Captiva in Florida, a base from which he began to travel extensively to the Americas, Europe and Asia. Works such as Cardboards 1971-2, an astute examination of globalisation, and fabric-based works such as The Jammers 1975-6 will reflect the artist’s ability to creatively utilise unusual materials. Rauschenberg’s huge travelling exhibition, Rauschenberg Oversea Culture Interchange, which journeyed through Chile, China, Tibet and Cuba between 1984 and 1991, will also be seen at the show.

The retrospective will be populated with major international loans that have rarely travelled before. These include an array of his iconic Combines, hybrids between painting and sculpture, that will include Rauschenberg’s famous Monogram 1966-59: a taxidermy goat stuffed into a rubber car tire. This piece will be travelling to the U.K. for the first time in over half a century. Other notable works include Bed 1955—soiled sheets covered in paint marks—and the artist’s signature silkscreen paintings, including the well-known Retroactive II 1964 which portrays a recently assassinated John F. Kennedy.

Other central themes of the exhibition will include Rauschenberg’s interest in performance and dance as well as his boundary pushing experiments with image-making, printing on materials such as translucent textiles, polished steel and oxidised copper. A collection of modern inkjet paintings, combining images taken at home and on his travels, will reflect how Rauschenberg experimented with the boundaries of art into the 21st century.

Robert Rauschenberg has been organised by Tate Modern and the Museum of Modern Art, New York, and is generously sponsored by Arts & Collections International’s media partners, Bank of America Merrill Lynch.

‘We recognise that the arts have an important role to play in society—they help economies to thrive and individuals to connect across cultures. As such, the Bank of America Merrill Lynch Arts and Culture programme is both diverse and global,’ said Emma Baudey, arts and culture manager at Bank of America Merrill Lynch. ‘Our commitment to culture has the chief aim of supporting non-profit arts organisations deliver what they do best—whether it be through our sponsorship of travelling exhibitions, helping to present iconic works of art for the appreciation and learning of large audiences, or via our Art Conservation Project, helping to protect and restore works of cultural significance.

‘This year we are proud to again partner with Tate Modern as global sponsors of the upcoming Rauschenberg exhibition. This major retrospective—which, after London travels to MoMA, New York and the San Francisco Museum of Modern Art—will bring together his iconic pieces and provide a valuable opportunity for the public to view the works of a visionary artist who often broke rules and reinvented ideas.’