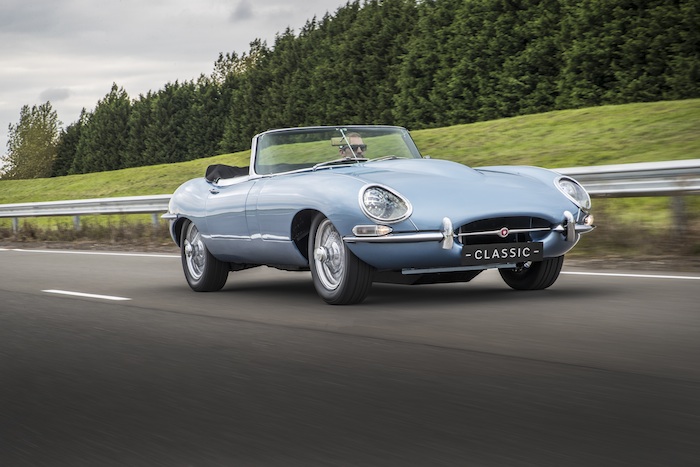 Arts & Collections investigates the resurrection of the Jaguar classic D-type model—one that incorporates style, nostalgia and modern flair—while assessing the prosperity of cars within the Luxury Investment Index.

A recurring theme that’s circulating within the automotive community this year is that of restoration and resurrection. Some of the most renowned car manufacturers are reviving their iconic models from the past and introducing them back into the market. A trend that brand Jaguar most recent ventures perfectly demonstrate.

This year, Jaguar announced that it is recommencing production on the Jaguar D-type, marking the first time the car has been in circulation in over 60 years. A total of 25 replicas will be hand-built to kick-start the project at Jaguar Land Rover’s new Classic Works Tour in Warwickshire, U.K. The Jaguar D-type was first produced between 1954 and 1957. Its structural design was revolutionary for its era, applying groundbreaking aeronautical technology. Jaguar Land Rover Classic’s director, Tim Hannig, said, ‘The opportunity to continue the Jaguar D-type’s success story, by completing its planned production run in Coventry, is one of those once-in-a-lifetime projects that our world-class experts at Jaguar Land Rover Classic are proud to fulfil.’

The remake of the D-type coincides with another development the automotive giant has put into action. In September 2017, Jaguar presented an electric-powered Jaguar E-type at the Jaguar Land Rover Tech Fest in London—based on the 1968 1.5 E-type Roadster. The rejuvenated car, labelled the E-type Zero, combines the sleek aesthetic of the original vehicle with the added benefit of no emissions. The contemporary tweaks made to the E-type Zero have vastly improved the car’s performance, making it faster than the 1968 series. Its cutting-edge electric powertrain enables it to reach speeds of zero to 62 miles per hour in just 5.5 seconds.

This bold move by Jaguar exemplifies the evolving inclinations of automobile collectors. Potential  investors are hungry for new technologies, yet still yearn for vintage models. Data from the Knight Frank Luxury Investment Index report concurs with this analysis. Despite having a rocky year in 2017—slipping back to sixth place on an annual basis with average prices rising by just two percent—the index suggests that vintage vehicles are one of the top-performing assets over a 12-year period. Classic car values may have taken a tumble over the short-term, but their performance has proved to be relatively consistent compared with other categories, such as art. An examination of the asset’s performance shows that small-cap cars (those selling for less than €100,000) had the highest quantity sold. The top lot cars (those selling for more than €1 million) performed the best in terms of actual turnover.

Due to the shifting political and socioeconomic landscape, traditional investment markets have become more unsettled—hence the degree of safety that lies in tangible commodities such as art, jewellery, watches and collectable cars. According to a report by AXA Art, classic car prices have dipped slightly: a decline driven by an abundance of cars that have recently flooded onto the market. However, the account also shows that values at the top end of the market have remained robust. In fact, 2016 saw the astounding sale of a Ferrari 250 GT through RM Sotheby’s; the 1961 SWB California Spider fetched $18.5 million at auction. More recently—in August 2017—a new world record was made for a British automobile, the 50s Aston Martin DBR1 sold for $22.5 million. The vehicle was raced by legendary driver Stirling Moss and was also auctioned by RM Sotheby’s.

Chris Bentley of AXA Art offered his views on the topic, saying: ‘Classic cars are purchased by people who are not typically driven by financial considerations but by an admiration of iconic design and high performance.’ It is perhaps the nostalgic nature of classic vehicles like Jaguar that intensifies their appeal, especially to individuals with a keen eye for specific models. If manufacturers like Jaguar continue to acknowledge and respond to these trends, we may well see luxury car prices soar once again.

Click here to read more about the Luxury Investment Index.