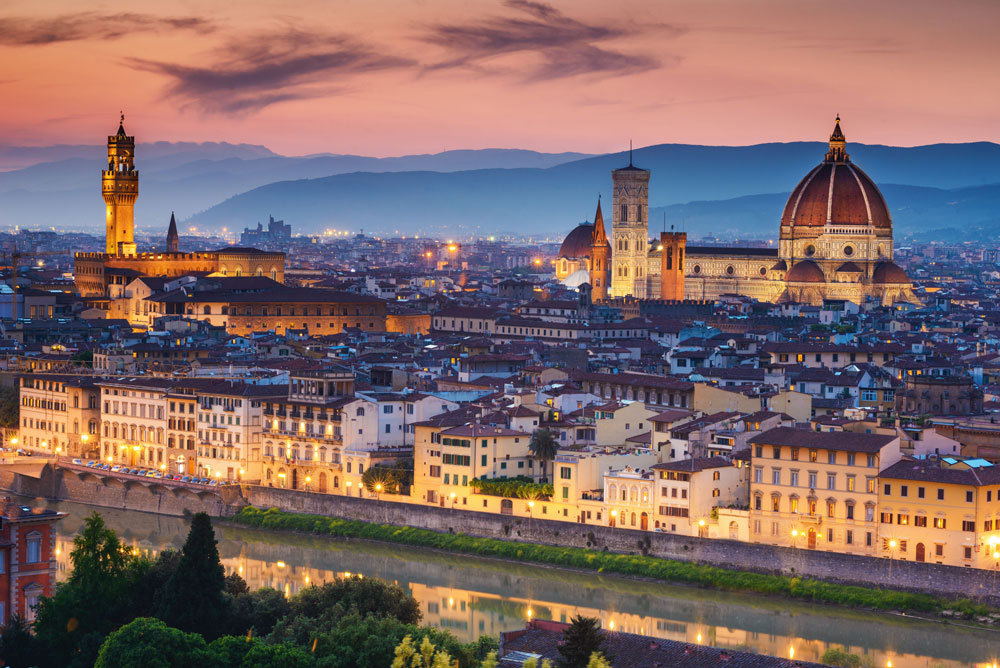 Flourishing in the 14th century, the Renaissance movement owes its rapid growth to political stability, cosmopolitanism, economic prosperity and the increasing sophistication of society. Influencing everything from art and architecture to music, politics and literature, this revival of Classical values is widely considered to be a bridge in time between the Middle Ages and modern history.

The conceptual basis of the movement was its own adapted version of humanism, which was attained through the rediscovery of Greek philosophy. During this time, education blossomed, with academies allowing scholars to conduct more research into the culture of the antique world.

This shift is believed to have started in Florence, the capital of the Italian region of Tuscany. Some historians pinpoint 1401 as the year the Renaissance period began—which coincides with the time Lorenzo Ghiberti and Filippo Brunelleschi competed for the contract to build the now-famous bronze doors of Florence Cathedral’s Baptistery. Ghiberti won the contract, but Brunelleschi then went on to engineer the Duomo’s terracotta-tiled dome.

During the Renaissance, art and money went hand in hand. Famous artists of the time—including Michelangelo, Raphael, Botticelli, Donatello and Titian—relied on wealthy patrons to commission their masterpieces. Influential individuals such as the Medici family of Florence, the Sforza family of Milan and various religious figures greatly shaped the artistic landscape of that time. Back then, artists hailed from all backgrounds and social classes; they began as apprentices and moved on to professional guilds where they worked under the tutelage of masters.

In terms of paintings, one of the movement’s distinguishing features was the newfound development of highly realistic linear perspectives. Artists began experimenting with new techniques, studying shadows, light and human anatomy—as famously seen in Leonardo da Vinci’s Vitruvian Man (c.1490). Da Vinci, described by many as the true archetype of the ‘Renaissance Man’, effectively demonstrated all of the values linked to this distinct style through his famous art, writings and scientific discoveries.

His most notable works include the Mona Lisa (1503-05), The Virgin of the Rocks (1485) and The Last Supper (1495-98). These masterpieces clearly showcase the artist’s ability to capture light, shadow and the physical relationship between figures and the landscape around them. Renaissance art simply sought to capture the experience of the individual and the beauty—and mystery—of the natural world.

In architecture, buildings once again featured the Roman orders of columns; Tuscan, Ionic, Doric, Corinthian and Composite. This architectural style, which immediately followed the Gothic period, placed a great emphasis on symmetry, geometry and proportion. Renaissance art and structures all exhibit traits such as pilasters, lintels, semicircular arches, vaults and domes.

Florence remained the ‘capital’ of Renaissance art until the 16th century, after which its influence moved to other Italian cities such as Rome and Venice—a period known as the High Renaissance. Some of its notions also translated to different parts of Europe, introducing the Northern Renaissance—a movement that didn’t quite follow the same principles of humanism as its Italian counterpart.

Some of the most notable artists of this time, Albrecht Dürer and Jan van Eyck, created masterpieces like The Crucifixion; The Last Judgment (c.1440) and Melencolia I (1514). These famous works are now housed in the world’s most prestigious institutions.

By the late 1500s, the Mannerist style—known for its intellectual sophistication and artificial qualities—developed in direct opposition to High Renaissance art and its idealised naturalism. This new movement spread from Rome and Florence and became the dominant style in Europe. The Renaissance continued to be glorified, however, much like it is today. In fact, 16th century art historian Giorgio Vasari, author of Lives of the Most Eminent Painters, Sculptors and Architects, described this romantic period as the ‘culmination’ of all Italian art.

If you’ve enjoyed reading this article on Renaissance art, click here to read more on Arts & Collections about the impressionist movement.