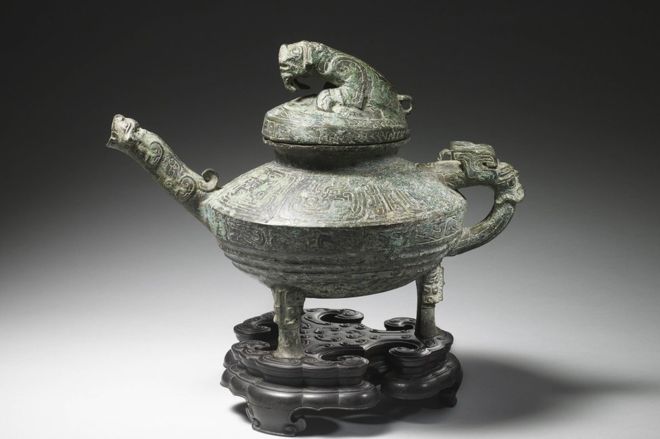 A rare teapot supposedly looted from a Chinese Emperor’s palace has gone under the hammer—causing a stir in China.

The 3,000-year-old Chinese bronze tiger teapot was found gathering dust in a family home in an unspecified seaside town in Kent, south England.

It was discovered by Alistair Gibson, a Chinese art specialist working for Canterbury Auction Galleries, who sold it for £410,000 on 11 April.

Mr Gibson told the Telegraph: ‘When I was asked to view a small collection of Chinese bronzes in this unassuming house, I didn’t imagine the door would open to an 1860s time capsule.

‘The last thing I expected to find was this remarkable bronze.’

Only six smaller archaic vessels, known as Ying, are believed to exist, and five of them are in museums.

The rare bronze water vessel, which dates back the Western Zhou dynasty more than 3,000 years ago, fetched more than double its guide price.

The lot sparked keen bidding, especially from Chinese buyers, and it rapidly exceeded its £120,000-£200,000 estimate to become one of the auction house’s biggest successes.

But the teapot’s sale was opposed by the Chinese government who claim it was misappropriated from a Beijing palace by British troops in 1860.

Chinese state heritage administrators say it should never have been sold but the auction house has defended the sale’s legitimacy.

Wen Xuan, from the administration, said: ‘We have consistently opposed and condemned the sale of illegally-discharged cultural relics.

‘We hope the relevant agencies will abide by the spirit of the international conventions, respect the feelings of the people of the country of origin of the cultural relics, do not buy or sell illegally-run cultural relics, or conduct commercial hype in the name of such cultural relics.’

Ahead of the auction, Canterbury Auction Galleries’ managing director, Tony Pratt, said: ‘We are confident the owner had good title of the “vase”, which came into the country in 1860, and we have satisfied due diligence and have every right to sell it.’