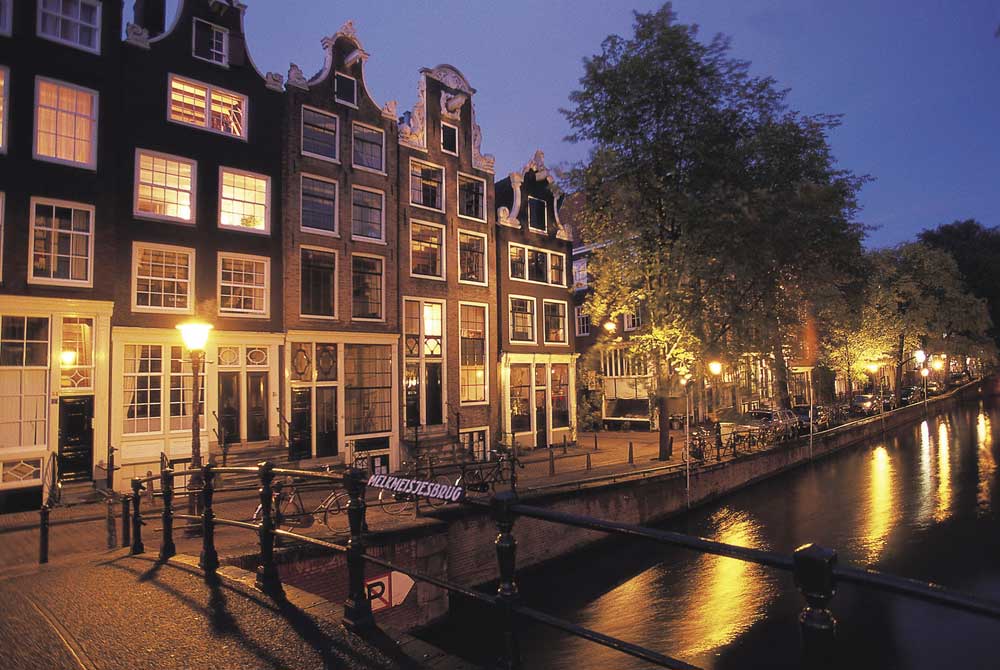 Much loved for its chilled-out ambience, Amsterdam offers visitors a rich abundance of activities, from visiting world-famous museums and historical buildings to meandering along the city’s winding canals.

Amsterdam is a city defined more than most others by its geography. Built on a series of 160 canals organised in a half-moon shape around the harbour, it’s a famously watery city – indeed, most of it lies below sea level. The canals were at the root of the city’s success as a trading port during the Golden Age.

Today, they are at the heart of Amsterdam’s unique appeal, lined with rows of tall, gabled houses and crossed by picturesque bridges with bicycles chained to every railing. The atmosphere in this compact city is laid back, but eminently civilised. Ruled by fleets of cyclists, not motorists, it retains a rare sense of tranquillity, particularly in the historic centre. Amsterdammers seem to know how to get the best out of life. And with an extraordinary concentration of museums and galleries and the world’s best concert hall at their disposal, they’re never short of something to do.

In the entire time since its opening in 1888, Amsterdam’s Concertgebouw has hidden the secret of its amazing acoustics. Once described as ‘the best instrument in the orchestra it houses’, the auditorium’s design was modelled on the large concert hall in the Neue Gewandhaus in Leipzig. Even the most sophisticated recording equipment has failed to reveal the reasons for the venue’s near-perfect listening quality.

The sound of music

Amsterdammers are justly proud of the city’s main concert venue, the CONCERTGEBOUW on Museumsplein. This renowned hall, designed by AL van Gendt in the late nineteenth century, is the world’s busiest concert venue, and receives getting on for a million visitors a year. It’s known worldwide for its near-perfect acoustics (despite Gendt’s reputation among his family and friends for having a tin ear) and each year more than 800 concerts are held here, from chamber music to world music.

Free concerts are held every Wednesday lunchtime (go early if you want to secure a seat). Another of Amsterdam’s music venues is the MUZIEKGEBOUW AAN’T IJ, about a 10-minute walk from Central Station on the bank of the IJ. Opened in 2005 to host contemporary classical music, the glass-fronted Muziekgebouw has a 750-seat auditorium which features flexible seating and a ceiling that can be lowered to vary the acoustic. The adjoining BIMHUIS houses a club for jazz and improvisation.

Amsterdam is one of the world’s greatest centres for the cutting, polishing and sale of diamonds. The industry began with an influx of Sephardic Jews fleeing persecution in Antwerp in the late sixteenth century, and had its heyday in the nineteenth century with the discovery of diamonds in South Africa.

The city still has several diamond factories where you can learn about the processes of cutting and polishing the stones. Among the best tours is the one at Coster Diamonds (just along from the Van Gogh Museum), where the massive Koh-I-Noor was cut for Queen Victoria. Or, if you don’t want to be tempted to spend your life savings, head for the DIAMANTMUSEUM, which covers a wide range of diamond-related subjects from how to tell if a diamond is genuine to great diamond robberies.

One of the most characteristic features of Amsterdam’s social life are its many brown cafés, so-called for their wood- en floors and walls stained brown by years of pipe, cigarette and candle smoke (and not to be confused with the equally widespread coffee houses, where small quantities of marijuana can be bought and smoked).

Easygoing and atmospheric, they encapsulate the spirit of gezelligheid, a word much used by the Dutch, which translates as a spirit of conviviality and companionship. Brown cafés come into their own in winter, when customers cosy up to eat pea and ham soup and drink glühwein at candle-lit tables. Het Molenpad on Prinsengracht is one of the best.

If you’ve had enough of high culture, an afternoon spent in the bohemian Jordaan district, west of the city centre, is a good restorative. This maze of tightly packed streets and narrow canals was originally a working-class district. Today, it’s full of vintage clothes stores, toyshops, galleries, delicatessens and res- taurants. Look out for Het Oud-Hollandsh Snoepwinketje on the corner of Tweede Egelantierdwarsstraat and Tuinstraat, an old-fashioned sweet shop with jar upon jar of sweets of all descriptions.

The most important canals are the four semi-circular waterways of the canal belt: Singel, Herengracht, Keizersgracht and Prinsengracht, arranged in concentric rings extending out from the centre. Built during the Golden Age, they are lined with tall, narrow houses (taxes were paid according to the width of your property, so building thin became a kind of competitive sport). It’s all impossibly picturesque. One of the best ways to get a feel for the city is to take a boat ride, either on an organised tour or just by hopping onto the Canal Bus, which operates along three circular routes that begin opposite Central Station. Alternatively, hire a bike and take a ride alongside (but watch out for bumpy cobbles).

A piece of history

Just a couple of minutes’ walk along Prinsengracht from the Hotel Pulitzer is the house (now a museum) where Anne Frank and her family hid from the Gestapo for two years during the Second World War, until they were betrayed by a collaborator and sent to concentration camps.

Of the seven people who lived in the secret annexe, tucked away at the back of an office building (Anne, her parents and sister Margot, family friends the Van Pels and their son Peter and later another friend, Fritz Pfeffer), only Anne’s father Otto survived the end of the war. Anne herself died in Bergen-Belsen in March 1945, a matter of weeks before the Liberation. Her poignant diary was retrieved from the annexe by Miep Gies, one of the family’s helpers during their incarceration, and given to Otto, who decided to publish it.

It became an immediate bestseller and has since been translated into over 60 languages. The museum opened in 1957, with the cramped annexe left exactly as it was during the war years (only the furniture has been removed). Wall panels set the Franks’ story in the context of the invasion and occupation of the Netherlands by the Nazis, the oppression of the Jews and the concentration camps. A visit to this simply presented museum is an immensely moving experience.

Much of Amsterdam’s cultural and architectural heritage has its origins in the so-called Golden Age, when maritime trade brought huge wealth and a population explosion. The foundation of the VOC (Verenigde Oost Indische Compagnie, or Unit- ed East India Company) in 1602 paved the way for world domination by Amsterdam’s merchants. Over 1,000 shareholders pooled their resources to pay for hugely expensive exploratory trips to the East, and before long the company had a monopoly of Dutch trade from the Cape of Good Hope to Cape Horn.

Throughout the first half of the seventeenth century the powerful VOC continued to expand its fleet, and the arts flourished with this new wealth. Records show that some 20 million paintings were produced in the first half of the century, and Dutch artists, including Rembrandt, Steen and Vermeer, were able to command a good living. To sample the lifestyle of a wealthy merchant, visit the beautiful VAN LOON MUSEUM on Keizersgracht.