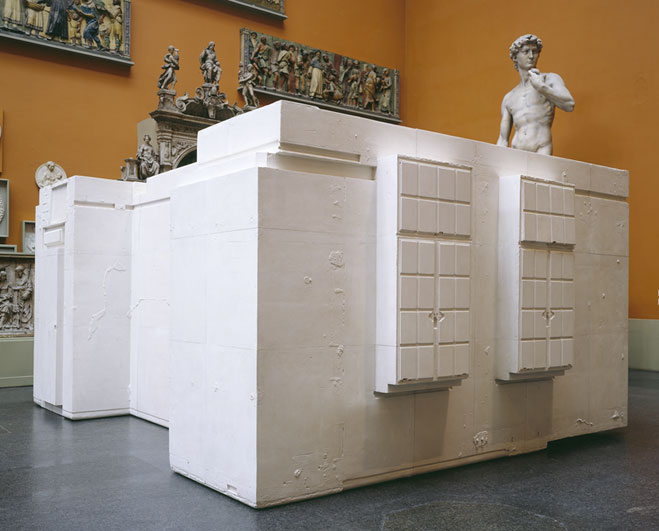 Rachel Whiteread’s new exhibition at the Tate Britain has been unveiled and looks to embody elements of mystery, intrigue and familiarity.

Since the 80s Whiteread has dedicated almost the entirety of her time and work to making casts. Using common industrial materials such as resin, rubber, concrete and metal, she casts the most weird and wonderful objects and architectural environments. The majority of Whiteread’s casts, however, tend to focus on domestic objects and their ‘negative spaces’. She describes her choice of methodology by explaining that her depictions of interior spaces carry ‘the residue of years and years of use’.

Whiteread’s repertoire of sculptural discovery has seen her cast sinks, mattresses and rooms within a North London flat and even an entire house slated for demolition. Her imagination and quest for discovery knows no bounds. The Tate Britain’s new exhibition showcases the contemporary artist’s career, reuniting some of her best-known pieces with some newcomers. Ranging from the homely and comforting to the overbearing and monumental, visitors are lovingly escorted through 25 years of her work in sculpture.

Rachel Whiteread was born in Ilford, Essex in 1963. Despite graduating with a BA in painting, she always carried a fondness for sculpture. After participating in a workshop ran by Richard Wilson, Whiteread soon realised her true calling and the vast possibilities that came with casting objects. Fulfilling a few side jobs to fund her career, she eventually began to exhibit her own work in 1987. The success of her first exhibitions created funding for her larger sculptures and future projects.

In October 1993, Whiteread made history when she became the first woman to win the Turner Prize for the best young British artist. House (1993), perhaps one of her most revered projects, is a cast of an entire Victorian terraced house from East London. House was eventually demolished in 1994 by the London Borough Council, a decision that caused a large amount of controversy.

Within the Tate Britain’s retrospective, Rachel Whiteread’s new exhibition, Whiteread’s Untitled (100 Spaces) (1995) will lead onto other favourites such as Untitled (Staircase) (2001). Even the lawn outside the gallery has been used as a platform for her work, featuring one of her newest art pieces—Chicken Shed (2017).

Whiteread’s style has always been a point of dispute amongst art lovers; while some hail her as a visionary, others believe her figures lack substance or character. Statuaries of sash windows, baseboards and front doors all resemble clones at first glance within the Tate’s event. Looking at the uniformed objects, one can suddenly grasp the minute differences between each cast—upon closer inspection the unique intricacies of each are revealed. Imprints of human interaction impart small dents and distinctive marks upon the swirling wood frames. Each object has is its own character and story to tell, yet is part of a larger picture.

The event space itself has been thoughtfully constructed, dismissing the old temporary walls and creating a feeling of openness in the entire area. In fact, the openness has even been described as being reminiscent of a warehouse. Visitors are left to dodge and weave through each standing art piece marking the progression of the artist’s style.

Being one of Britain’s leading contemporary artists, Rachel Whiteread’s new exhibition at the Tate Britain is likely to dazzle and turn heads in the process. The display will show until 21 January 2018.

If you have enjoyed reading this article on Rachel Whiteread’s new exhibition at the Tate Britain, click here to read more on Arts & Collections about the artist René Magritte.