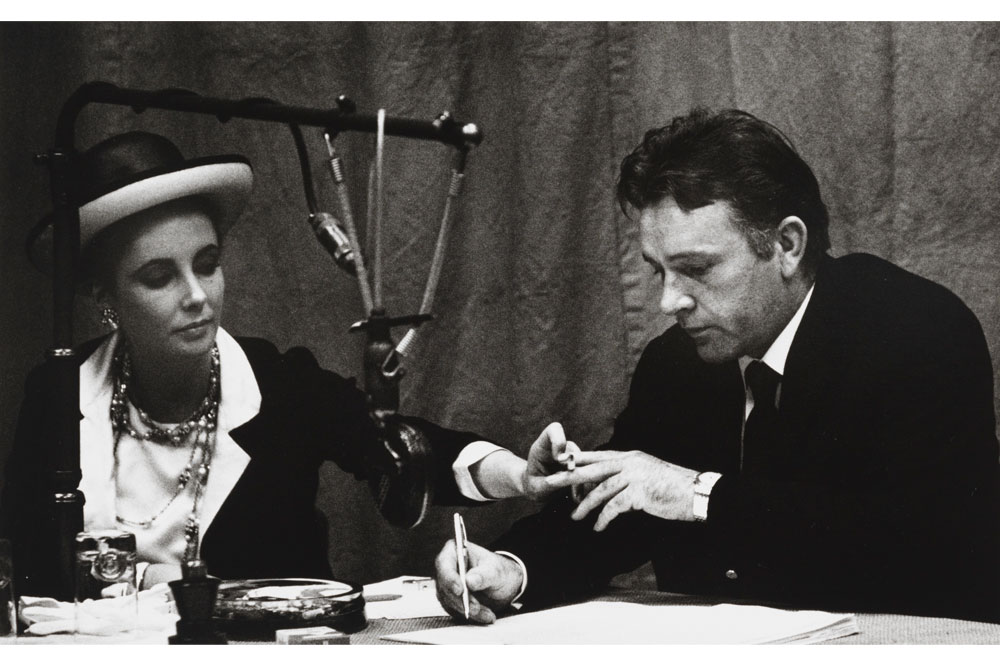 Considered a great of twentieth century photojournalism, Michael Peto’s career is celebrated in a new display of previously unexhibited portraits.

As a suave Richard Burton jots down notes, a bejeweled Elizabeth Taylor passes him a cigarette. The year is 1963, the occasion is the critically acclaimed BBC radio recording of Under Milk Word, and photojournalist Michael Peto (1908-70) is on-hand to snap the intimate moment between two of Hollywood’s elite.

Captured in the early stages of the couple’s notoriously tempestuous relationship, this candid and previously unexhibited photo is just one of the many captured by the Hungarian-British photographer taken during the 1950s and 1960s—of which ten from this era have been selected for display at the National Portrait Gallery, London as part of a posthumous celebration of his work.

Compiled from The Peto Collection at the University of Dundee, the showcase entitled Michael Peto Photographs: Mandela to McCartney comprises fifty photographs of some of the world’s most famous figures uncovered when Peto’s vast collection was donated by his family to the college following his untimely death in 1970. These include images of playwright Samuel Beckett photographed in his Paris apartment in 1961; Nelson Mandela photographed during a brief visit to London in June 1962; Jennie Lee photographed near the Houses of Parliament in 1965; Paul McCartney with The Beatles during the making of the film Help! (1965); and one of Peto’s last sittings—a young Ian McKellen during his success in the Prospect theatre production of Richard II in 1969.

Life behind the lens

Born in Bata, Hungary, Peto’s story stems from humble beginnings. The son of a village shopkeeper, he moved to Budapest in the 1930s where he worked in exporting Hungarian crafts. But as the shadow of Nazism fell across Europe during the outbreak of the Second World War in 1939, Peto, enabled by his exportation job, fled the country that summer—managing to escape just before the borders closed. Aged 31, he found himself in London, a refugee needing to build a new life—working firstly as a writer, eventually taking up photography in 1947; an interest he developed while he submerged himself in politics helping reconstruct post-war Hungary.

It wasn’t before long that Peto’s work was picked up, and was first published in The Observer in March 1949. By result, he became a regular contributor alongside other noted photojournalists such as Jane Brown, Peter Keen and David Sim.

In the two decades that followed, Peto helped document social issues and the key cultural and political figures of that era—aptly adding The Dalai Lama, Indira Ghandi, Nikita Khrushchev, Harold Wilson and James Callaghan among others to his collection. In addition to his social and political work, Peto also turned his hand, and eye, to the arts and became involved in the London ballet scene, being especially known for his portraits of Rudolf Nureyev and Margot Fonteyn—including the duo during rehearsal for Giselle in 1962, their first performance together at Covent Garden. It was also during this time that he published The Dancer’s World (1963) with Nigel Gosling and About Britain (1967) with Kenneth Harris, with his work also appearing in newspapers and periodicals including The Tatler and The Times.

Working during a time so crucial to art and politics, it is hardly surprising that Peto’s archive is made up of no fewer that 130,000 vintage prints and negatives. To celebrate, a whittled-down collection entitled Michael Peto Photographs: Staged in Britain recently exhibited at the New York Public Library for the Performing Arts at the Lincoln Center Plaza while the Michael Peto Photographs: Mandela to McCartney currently displays at the National Portrait Gallery in London until June 1, 2014—both of which have come together as a unique collaboration between the two institutions and the University of Dundee.

“When we were first approached in 2011 about a collaboration with The Peto Collection, I was immediately excited at the prospect of viewing at first hand as many as possible of the 130,000 negatives and prints in Dundee that survived and had largely been unexplored,” recalls Terence Pepper OBE, Head of Photographs Collection at the National Portrait Gallery. “Picking out this selection of important images we hope will be the start of writing Peto back into the annals of important photographers whose work can be re-evaluated and appreciated more widely.”

With an intense interest in the variations of human form, Peto was renowned for his talent in capturing his subjects in their natural environment, snapping personalities across all industries such as musician Louis Armstrong, playwright Brendan Behan and actress Maggie Smith.

“He was able to do it all with a keen eye and subtle sensitivity,” explains University of Dundee Rector and actor Brian Cox CBE, Patron of The Peto Collection. “This collection is an extraordinary gift he has left us, so please, learn, appreciate, enjoy and, above all, support its future.”
In addition to the remarkable showcase at the National Portrait Gallery, a collection of portraits of world leaders and political figures is scheduled to line the halls of the Scottish Parliament in Edinburgh this year as part of a season of exhibitions celebrating Peto’s remarkable contribution to portrait photography.

In the meantime, archivists at Dundee University will continue to process the rest of the uncovered Peto prints. With over 100,000 images yet to be developed, it may be fair to assume that fans, enthusiasts and historians alike can anticipate many more iconic snapshots illustrating some of the greatest moments of our time.

For more information on the Michael Peto Collection, visit dundee.ac.uk/petocollection

Peto’s collection of The Beatles remains some of the most intimate photographs of the group. At a time when the band was only available through carefully managed photo calls, Peto was instrumental in capturing rare off-duty portraits. This includes Revolutionary 1965—a series of photographs captured during the recording of Rubber Soul and the filming of Help!.

Here, the band are pictured with director Richard Lester (b.1932) during a break in the filming of the ‘Buckingham Palace’ scene, which used Cliveden House and especially built sets at Twickenham Studios as locations. The following day, in twelve takes over roughly four hours, the Beatles recorded their single Help at Abbey Road Studios. It entered the UK charts on July 29 and from August 5, spent three weeks at number one.

In the same year they were awarded MBEs (June 12, 1965) and commenced their final British tour (December 3, 1965). In 2006, Peto’s photographs of the group were collected in a limited edition book, Now These Days Are Gone.

“Picking out this selection of important images we hope will be the start of writing Peto back into the annals of important photographers whose work can be re-evaluated and appreciated more widely.” —Terence Pepper OBE, Head of Photographs Collection at the National Portrait Gallery

“This collection is an extraordinary gift he has left us, so please, learn, appreciate, enjoy and, above all, support its future.” —Brian Cox CBE, Patron of The Peto Collection