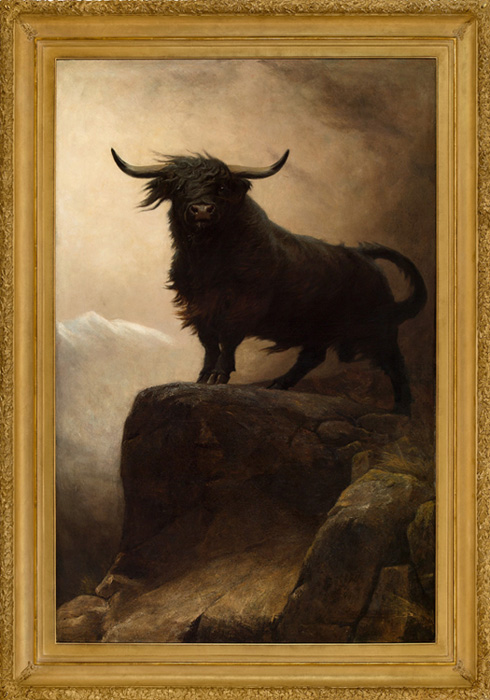 Nothing causes more excitement in the art world than when a work previously thought to have been lost miraculously resurfaces. Recently, this was the case with Leonardo da Vinci’s Salvator Mundi (c.1490)—a work due to be sold at auction in November 2017. Now, it has been announced that another ‘lost masterpiece’ is to be sold—Margaret Collyer’s Lord Of The Isles (1901).

Margaret Collyer was an animal painter active around the turn of the 20th century. She lived in England and Kenya and her art took inspiration from the creatures and landscapes around her. The majority of her most famous works were painted during her time in England from around 1890 to 1915.

She had a fascination with the Highlands and would often dress in traditional Scottish garments: ‘kilt, bare knees, dirk, sporran, plaid…and a bonnet on the side of her head.’ At the height of her artistic career, she had at least one or two paintings exhibited at the Royal Academy of Art in London every year from 1897 to 1910.

Margaret Collyer most commonly painted dogs and horses. She had a great love of animals. According to her autobiography, she once bought a Scottish Deerhound from a stranger on a train for £8.

Lord Of The Isles, the ‘lost masterpiece’, is a striking painting featuring a highland bull on a rock. It is unknown what happened to the work during the many years it was thought to be lost: however, it is still in good condition. The painting feels almost cinematic with the wind whipping through the bull’s hair and the impressive contrasts between light and dark. This impactful work captures a view of strength and dominance that was unexpected from a female artist at the time. This is perhaps why Collyer is often lauded as an early feminist.

For centuries, women were banned from life drawing classes under the assumption that such a view of nudity would be unsuitable for female eyes. Margaret Collyer was outspoken in her disapproval of this: for women to develop properly as artists she believed they must have access to the same resources as men.

Margaret Collyer’s Lord Of The Isles will be on sale at the Winter Art & Antiques Fair Olympia with Tom Rooth Fine Art. The fair takes place next week (31 Oct to 5 Nov). For more information visit www.olympia-antiques.com

Looking Past the Moomins: A UK Exhibition