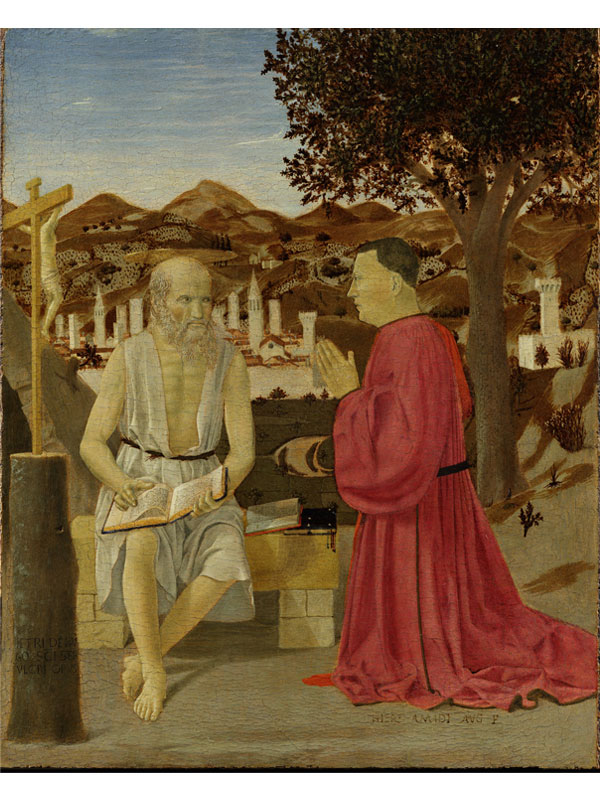 Four exquisite works of art, made especially for private devotional purposes, together with an outstanding new study by Professor James R. Banker, underline the importance of Piero della Francesca as one of the pre-eminent artists of Renaissance Italy.

Neglected for four centuries, the surviving paintings of Piero della Francesca are today regarded as sublime masterpieces, with the artist himself seen as central to the flowering of Renaissance art, and equal in importance to Leonardo da Vinci and Michelangelo. Piero della Francesca is revered by twenty-first century artists, art connoisseurs and scholars alike, not only for his mastery of perspective and proportion, it is also his unique vision—the depiction of light and the local landscape and the atmospheric human qualities of his subjects that draws the viewer in to scenes that sometime have an enigmatic air of mystery about them.

The famous The Baptism of Christ (National Gallery, London) is Piero’s earliest surviving work, and is known to have been painted for the church of San Giovanni Battista at Sansepolcro, the Tuscan town 79 miles south-east of Florence that was Piero’s birthplace in or around 1412. The American expert, Professor James R. Banker, in his insightful new book Piero della Francesca, Artist & Man (2014), postulates that the painting was in progress 1436-39, and that ‘it seems probable that The Baptism of Christ was Piero’s first major commission’.

The Baptism is a calm and reflective painting, typical of the mood of Piero’s paintings and frescoes. This masterpiece has been painted on poplar wood using egg tempera—the most common and permanent medium then in use, consisting of a binding agent or glue made from egg yolk mixed with a little water, with ground pigment colour finally added.

We know that this time consuming preparation of panels, the grinding of pigments and preparation of other painting materials, was a task often given to an apprentice before that apprentice could progress to paint sections of a panel, then finally qualifying to become an independent artist himself. Apprenticed at a young age to the painter Antonio d’Anghiariat, Piero would himself have followed this arduous process, a process not completed, Professor Banker tells us, until the age of twenty-six.

A question that has puzzled scholars is this: with no formal education, how was it that Piero della Francesca became, with Leonardo da Vinci, one of the outstanding geometricians of the age and the most intellectual painter of the Quattrocento? It is one of many questions that Professor Banker sets out to explore in painstaking detail.

Banker, who himself lives in Piero’s hometown of Sansepolcro, has spent many years of meticulous research, discovering more than a hundred previously unknown documents, all of which helps to give us the most complete picture we are likely to get of the artist and his achievements.

The list of surviving works by Piero della Francesca totals around 40, the majority of which remain in various locations in Italy. For this reason, being able to view four of Piero’s masterpieces outside of Italy, and in one place, is indeed a rare opportunity—but this is exactly what the Metropolitan Museum, New York, has been able to present us with during the first three month of 2014.

Through a special collaboration with the Gallerie dell’Accademia, Venice, and the Galleria Nazionale delle Marche, Urbino, The Metropolitan Museum of Art is hosting a focused presentation on the devotional paintings of Piero della Francesca, addressing Piero’s work for ‘private devotion’ for the first time.

The four works on view have never before been brought together; the exhibition, therefore, gives a unique opportunity for both art lovers and experts to the study and marvel at the work of this major figure of the Renaissance.

Among Piero’s earliest art influences were the religious paintings of the Sienese School such as Pietro Lorenzetti (c.1280-1348) and Sassetta (c.1392–1450) which may be seen today in churches in Arezzo and Assisi.  But Piero della Francesca’s ideas regarding art were quite different to those of his predecessors, with their richly gilded Byzantine influenced paintings—Piero’s interests took his art in a new direction.

It is clear that applying the laws of proportion and perspective to art was a revelation for Piero, for this was a time when abaco or the abacus school of thinking—which gave special significance to mathematics, algebra and geometry in Renaissance Italy—was the new trend and a major influence in all areas of art, design, and architecture. This immersion in abaco led to Piero’s mastery of three-dimensional arrangements, to his Treatise on Abaco (mid-1460s) and, in 1470, to his treatise On Perspective, in which he quotes directly from Euclid’s Elements, the classic of Greek geometry.

It is without doubt the combination of Piero’s painterly skills and his knowledge and application of revolutionary new ideas about composition, proportion and perspective that, in modern times, has led us to recognise Piero della Francesca as one of the greatest artists of the Italian Renaissance.

The exhibition Piero della Francesca: Personal Encounters at the Metropolitan Museum, New York, is accompanied by a brief catalogue containing essays written by Keith Christiansen. This is published by The Metropolitan Museum of Art and distributed by Yale University Press, $19.95. The catalogue has been made possible by The Christian Humann Foundation. Additional support has been provided by Jane Beasley, in memory of John P. O’Neill.