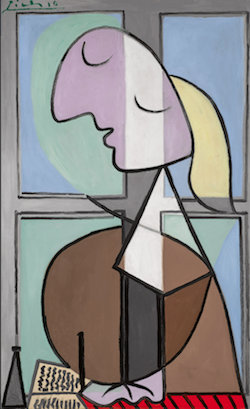 A portrait of  Golden Muse by Picasso is among the paintings set to fetch millions at Sotheby’s London Impressionist and Modern Art Sale next week.

The painting of Marie-Thérèse Walter is expected to sell for about £33 million at Sotheby’s months after a similar work went for almost £50 million.

James Mackie, Sotheby’s head of Impressionist and Modern Art, said the scale of the 1932 oil painting, which is 1.1 metres by three-quarters of a metre, made it stand out.

‘If you compare it to the Marie-Thérèse we sold in London in February for just shy of £50 million, that was less than half the size.

‘We haven’t seen a Marie-Thérèse on this scale for quite some time. She has a very particular allure for collectors, she is the one person that you can say had the greatest individual impact as a muse on his art.’

The Picasso show at Tate Modern, which runs until September and focuses on paintings from the same year—‘his year of wonders’—would drive up interest, Mr Mackie added.

Painted in 1932, Picasso’s annus mirabilis, the monumental—yet remarkably intimate—painting of Marie-Thérèse, absorbed in the act of writing, evokes a private moment from the artist’s clandestine relationship with his beloved muse. Known for their intensity and passion, Picasso works from 1932 are considered unique among his oeuvre.

The Picasso painting is one of a series of works that are estimated to fetch at least £124 million at the auction house in New Bond Street next Tuesday.

They include a charcoal painting by Henri Matisse, valued at £3 million, and a Monet valued at £5 million.