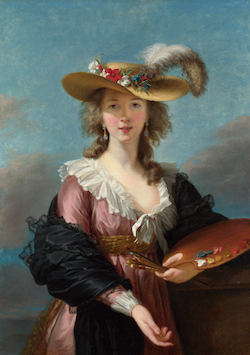 Throughout history, women artists have created some of the most powerful, vivid, liberating and subversive works of art ever made, yet their creations have been wildly understudied in comparison to their male contemporaries.

In 2015, four women artists were counted among the top 50 bestselling artists across Sotheby’s and Christie’s—that’s a tiny eight percent. Just as dispiritingly, a mere 35 percent of the collection on display at London’s Tate Modern can be accredited to women. For centuries, ‘Anonymous’ was often the pseudonym belonging to female artists, writers and creatives. It’s only within the last 100 years or so that the legacy of women artists throughout history has gained heightened recognition and reverence in art galleries and museums.

Italian Baroque painter Artemisia Gentileschi is well-known for her feminist oeuvre, depicting strong women who dominate violent scenes of suicide, battles and murders derived from the Bible and Greek myths. This recurring theme of patriarchal defiance manifested promptly after having been raped by her father’s colleague Agostino Tassi in 1612. The traumatic seven-month trial which followed was widely publicised and hugely turbulent for young Gentileschi, who suffered gynaecological torture to determine whether or not she was a virgin at the time of the attack (because there’d be no case if she had already lost her ‘virtue’). One of the artist’s most memorable and haunting paintings, Judith Slaying Holofernes (c.1614-20), recounts a scene from the Old Testament in which enemy of the Israelites, Holofernes, is being slain by Judith, his divinely appointed assassin. Judith is aided by another woman, who holds the victim down while she drives a sword through his neck as blood spills. The man in the scene is arguably not only Holofernes, but a visual representation of Tassi, and she, Gentileschi, Judith driving the sword through his neck.

Gentileschi enjoyed unusual success during an era in which women weren’t in possession of many rights, but her family’s status and wealth held her in good stead to acquire patronage from the esteemed Medici family in Italy. The Medicis also financed some of the most renowned and highly revered Old Masters of the time, including Leonardo da Vinci and Michelangelo Buonarroti.

Gentileschi’s art was a sensational devotion to women during her time and can be easily translated into a representation of the modern gender disparities women still face today. The painter is considered in the artistic arena as among the most progressive and expressive artists of her time.

Louise Élisabeth Vigée Le Brun—or Madame Lebrun, as she was widely known—was a highly fashionable Parisian portraitist during the 18th century. Le Brun, whose style sits comfortably somewhere between the delicate Rococo and Neoclassicism movements, was initially taught to paint by her father Louis Vigée, a portraitist and fan artist. Her ability to create flattering and elegant portraits earned the French painter early success and an impressive portfolio of wealthy clientele from both royalty and the aristocracy. Le Brun painted the likes of Duchesse de Polignac and Madame du Barry, but the most notable subject in her paintings is the bodacious queen Marie Antoinette, whom she painted no less than 30 times. Le Brun fast became the queen’s favourite as her works depicted her in a favourable and relatable light to the French public, whose opinion of her was waning.

In 1774, after her studio was confiscated for painting without a licence, the artist was accepted into the painter’s guild of the Académie de Saint-Luc—no mean feat for a woman.

In later years as the French revolution took hold of France, the Parisian artist’s close relationship with the royal family proved to be problematic. When the royal family was arrested, Madame Lebrun fled France with her daughter and spent many years working and living throughout Europe in countries like Italy, Austria and France. Thankfully, her previous experience enabled her to continue working and earning money as a painter while she was in exile.

Le Brun was finally able to return to her native country in 1804 during the reign of Napoleon I. Her paintings now have homes in some of the most prestigious art galleries in the world including the National Gallery in London and the Metropolitan Museum of Art in New York.

A leading figure in the impressionist movement, French-born Berthe Morisot’s exquisite depictions of middle-class life earned her an illustrious career. Finding success in the art arena at the tender age of 23, Morisot’s work was accepted into the prestigious state-run art show, The Salon de Paris, in 1864. So momentous was the privilege, that not even some of the most admired male members of the impressionist movement were given the opportunity. Morisot’s work would feature year-on-year at the Salon, but in 1873 she decided—bravely, at the time—to exhibit with the independent exhibition run by artists whose works were rejected by the Salon, despite the potential harm to her career and reputation.

As a woman, the impressionist was limited in her choice of subjects and as such was barred from painting brothel scenes, cabarets and bars. Instead, the painter delved into the more intimate side of feminine life, painting nudes, still lifes, women in social situations and dreamy landscapes.

It was in 1868 that Morisot met Édouard Manet, commonly referred to as one of the forefathers of the impressionist movement. Morisot later married Manet’s younger brother Eugéne; a companionship that would provide enough financial stability to allow Morisot to continue painting professionally. Morisot created her paintings using numerous media including oils, watercolours, pastels and pencil sketching. Her most famous works include The Mother and Sister of the Artist (1869-70) and Woman at Her Toilette (1875-80).

As is often the way with revolutionary artists, Morisot never found commercial success during her lifetime and most of her works were found in her studio after her death.

In 2014, Georgia O’Keeffe’s painting, Jimson Weed/White Flower No. 1 (1932), smashed previous auction sale records at Sotheby’s, raking in a staggering £28.8 million—and the sale is no fluke. O’Keeffe’s paintings have been stacking up the pounds for decades, both throughout her living career and beyond.

Accredited as one of the first American artists to practice pure abstract painting, the 20th-century artist is high on the list of the world’s most revered women artists of all time.

O’Keeffe is perhaps most well-known for her depictions of flowers and vivid desert landscapes. Having spent a lot of time in the New Mexico desert, the artist found new subjects to paint: weathered, sun-bleached animal bones. The bones and skulls are the focus of some of her most popular works including Cow’s Skull: Red, White and Blue (1931).

O’Keeffe began her professional artistic training at the School of the Art Institute in Chicago in 1905 and later at the Art Students League of New York. After completing her education, she worked as an illustrator and an art teacher in Texas until she was introduced to the philosophies of American painter Arthur Wesley Dow. It was upon discovery of Dow’s work that O’Keeffe’s own art career would flourish and develop into the modernist masterpieces we are familiar with today. O’Keeffe is immortalised by the Georgia O’Keeffe Museum in Santa Fe, New Mexico.