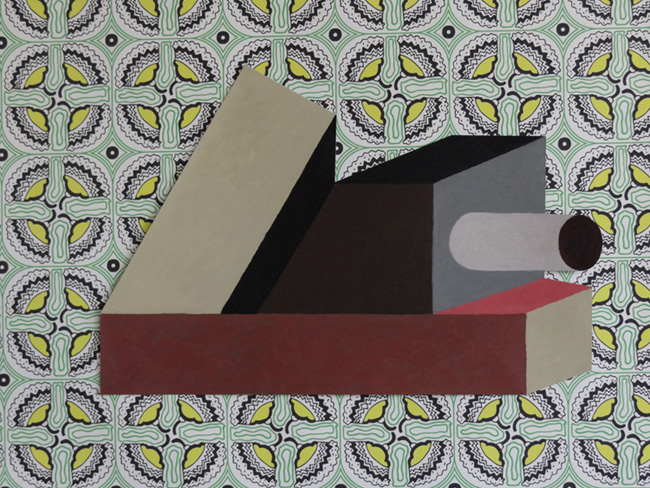 An exhibition showcasing Nathalie Du Pasquier’s work opens next week in London. The collection has transformed the Camden Arts Centre gallery as the painter and designer extends beyond the canvas and into the realms of three-dimensional art. The space not only displays her work, but also acts as an immersive installation with brightly coloured modular designs and geometric shapes that will span the venue’s walls.

Nathalie Du Pasquier gained fame as a designer when she became a founding member of the design collective Memphis. After David Bowie’s death in 2016, it was revealed that he was a collector of Memphis products, including a carpet designed by Nathalie Du Pasquier that went on to be sold at a Sotheby’s auction for £27,500. In 1987 she chose to make painting her primary focus. She developed as an artist through her work with Le Cadre Gallery, Hong Kong and has had several high profile solo exhibitions throughout her career.

‘Through the representation, I learned about looking and transforming what I saw into a painting,’ the French painter said. ‘The abstract work is a different kind of position. I became a builder, an inventor.’

She draws influence for her work from her background in furniture design. Her creations showcase some aspects of still life, but she plays with layout, colour and form so that her pieces become almost abstract. Often, Nathalie Du Pasquier will create a three-dimensional object in order to paint it, focusing on certain details or colours in each piece. In this exhibition, drawings that she made every day throughout the summer and seven ceramic sculptures—one for every day of the week—will also be featured.

Nathalie Du Pasquier combines architecture, interior design and art in this display to experiment with the idea of perspective. The vividly coloured pieces cross the boundaries of dimension, using space to challenge the angles from which people view the world.

Nathalie Du Pasquier’s exhibition Other Rooms will run from 29 September 2017 to 14 January 2018 at Camden Arts Centre.