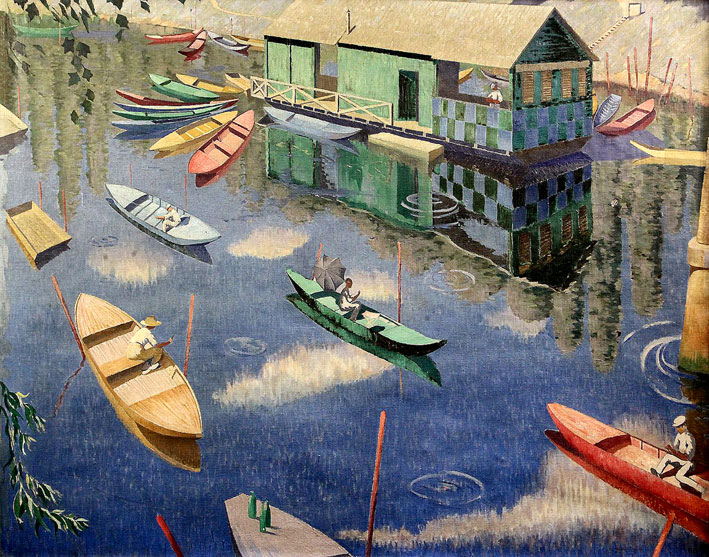 Along with fine artwork, the fair will also be exhibiting a number of other splendors to attract art enthusiasts from around the country. From rare antiquities to quirky modern-day collectibles, the exhibit will cater to all manner of tastes. The fair is expected to attract around 25,000 visitors, with 120 dealers appearing. The star of the show this year is Norman Lloyd’s lost masterpiece, which will be on sale at the fair and is expected to fetch between £30,000-£40,000.

The stunning painting, created in the 1930s, is titled: Summer on the Seine, Paris. It depicts several fishermen sat patiently on the Seine in their long boats, waiting for a catch. The lost masterpiece is vibrant yet tranquil; the depicted reflections of the water give it a feel of serenity. Founder of Darnley Fine Art and exhibitor at the fair, Adrian Pett, observes: ‘Norman Lloyd’s art has featured in museums and books but when I contacted the experts in this field none of them had heard of this piece, so its discovery as one of his finest paintings is exciting.

Comparing it to his other works you can see how much it stands out. Painted during the 1930s, Lloyd captures Paris in the summer heat in an explosion of colour across the canvas, with the stillness of the water only broken by the fisherman’s floats.’

Norman Lloyd’s passion for painting stemmed from his time with the Julian Ashton Art School in Sydney during his youth. His experience there advanced his career, allowing him to present his traditionally styled work in various galleries in both Sydney and Melbourne from 1921 to 1926. After travelling through Europe in the 1930s, Lloyd eventually settled in London with his wife Edith.

He established himself professionally by becoming an elected member of the prestigious Royal Institute of Oil Painters (ROI) and by exhibiting at the Royal Academy of London. His work mainly focused on landscapes portraying European scenes that were evidently inspired by his time travelling there.

A preview will be held on Monday 26th June for those who are eager to see Norman Lloyd’s lost masterpiece on sale. The Art & Antiques Fair Olympia takes place at the Olympia National, London, W14 8UX.

Faces of a Nation