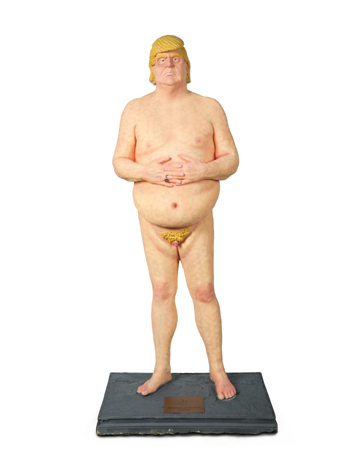 A statue of a naked Donald Trump is going under the hammer.

Works by Banksy, Andy Warhol and Jean Michel Basquiat will appear alongside the statue at Julien’s Street and Urban Art Auction.

The sale, which will take place 2 May 2018 in Jersey City, is Mana Contemporary’s first-ever street art auction.

Julien’s Auctions said: ‘The collection will include an extraordinary and diverse canvas of works by some of the most influential and iconoclastic street artists of all time.’

The auction house’s President/CEO, Darren Julien, told Arts & Collections: ‘We are very excited about our Street Art auction on 2 May taking place at Mana Contemporary in New Jersey.

‘As most art is controversial, this auction is no exception with the “Naked Trump” statue that we are selling, which was originally commissioned by Mana Contemporary in 2016 by the West Coast anarchist collective INDECLINE.

‘The first time this was sold was prior to the Presidential election in the U.S., so you could now say the name [of the statue] has changed to “Naked President Trump”.

‘It’s all in the name of art and as most artists of their time, Mana Contemporary wanted to capture the moment in our political history when they commissioned these statues.’

The auction’s exhibition is due to be held at the Juxtapoz Bookstore and Gallery at Mana Contemporary.

Julien’s say the sculpture of Trump in his birthday suit, wryly titled The Emperor Has No Balls, is the last statue of its kind remaining not vandalised or destroyed.

The series of controversial and explicit works, created by INDECLINE, appeared in public spaces in the U.S. before the presidential nominee was elected.

Other highlights from the sale include British street art provocateur Banksy’s Graffiti Rat—his famous recurring rat character—spray painted aerosol and acrylic on aluminium street sign (estimate: $40,000 to $60,000), and Andy Warhol’s Marilyn Monroe (1981), an inkjet on paper of the Hollywood screen goddess, signed by Warhol in black marker, which is estimated to fetch $5,000 to $7,000.

If you enjoyed this article, click here to read about Julien’s auction of Prince memorabilia.

In the Studio with Michal Janowski