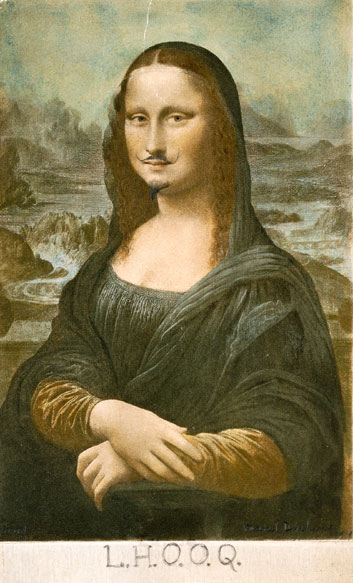 Some claim it was Duchamp’s way of drawing attention to the androgyny of the Mona Lisa, while others speculate that he intended to deface the famous painting, thus challenging modern perception of art.

Duchamp was famous for his ‘readymade’ pieces and adding elements to everyday objects—most famously Fountain (1917) where he presented a urinal signed ‘R.Mutt’. His work was part of the Dada movement that aimed to redefine the meaning of art.

Sotheby’s said: “The choice of the Mona Lisa is far from banal. The fact that this mythical painting by Leonardo da Vinci had become the ultimate symbol of sanctified, museum art did of course serve Marcel Duchamp’s cause, and this all the more so because 1919 was the year of the 400th anniversary of Leonardo da Vinci’s death.

“By choosing the most famous artwork in the world, a national icon in France, Duchamp aimed to desacralise the work of art. As Marcel Duchamp explained himself: ‘in 1919, when Dada was in full swing, and we were tearing down many things, Mona Lisa was the first victim’ (in Duchamp du signe, 1994).”

A total of 110 lots were sold in the same auction, fetching €3.9 million overall. The lots were from American Arthur Brandt’s surrealist collection and included Duchamp’s Boite-en-valise (Box in a Suitcase)—a miniature museum featuring 68 of the artist’s miniaturised works.

Swiss artist Kurt Seligmann almost broke his auction record in the sale as the painting Buste d’homme (c.1932) sold for more than double the upper pre-sale estimate of €80,000, with the hammer going down at €181,250.