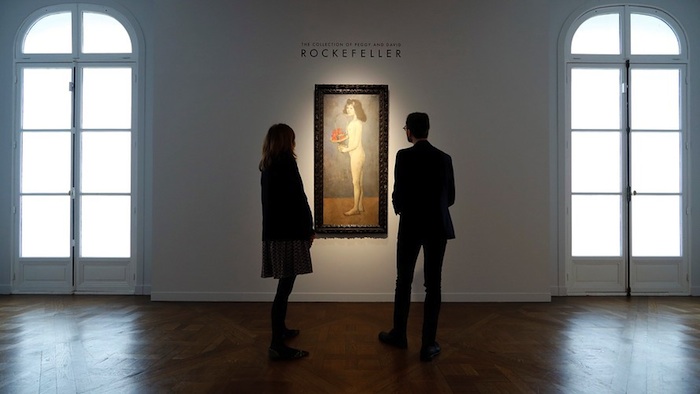 The vast art collection amassed by David Rockefeller will go under the hammer at Christie’s New York from 8-10 May.

The auction house is calling the three-day auction ‘the most anticipated art world event of the spring season’.

The sale, which coincides with a substantial upswing in the art market, could make history by achieving the enormous sum of $1 billion.

No other estate auction has ever surpassed that figure.

All proceeds from the Christie’s auction, which includes significant Picasso, Monet, Matisse, Hopper and O’Keeffe works, will go to charity.

Rockefeller, a surname that still serves as a byword for affluence, is synonymous with a Gilded Age dynasty spearheaded by wealth and luxury lifestyle.

David Rockefeller, to whom the collection on offer at Christie’s New York belonged, was a gentleman worthy of genteel nobility.

The former chairman and CEO of Chase Manhattan Bank led his extended family for decades until he passed away a year ago at age 101.

He inherited art but soon developed his own taste, outfitting his opulent homes with lush masterpieces by Monet, Matisse, O’Keeffe, Hopper, Picasso, Stuart and Cézanne.

He and his wife of 56 years, Peggy, also accrued 67 porcelain dinner services, including a Sèvres set that Napoleon had with him while in exile on Elba.

When he died, Rockefeller’s personal fortune stood at around $1.6 billion.

By that stage, he had already donated $1.4 billion to philanthropic causes aimed at education, nature conservation and cultural institutions like the Museum of Modern Art, which his mother co-founded in 1929.

Rockefeller’s will stipulated bequests of a further $650 million, so he and his advisers at Christie’s agreed to sell off almost everything in his personal estate after his death, with all proceeds to be donated—a charity auction to top them all.