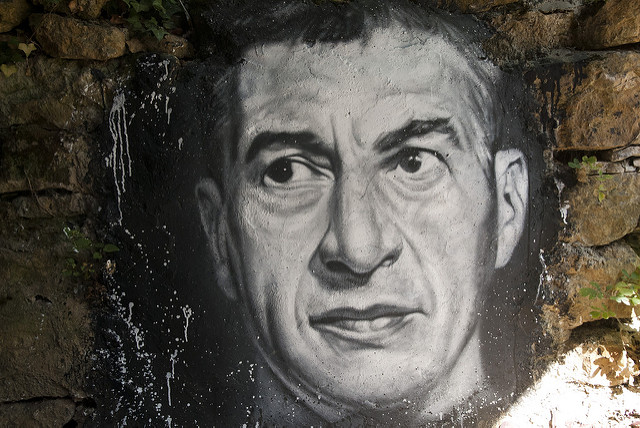 Maurizio Cattelan is one of the most controversial and elusive figures in contemporary art. Bizarre and highly provocative, his epithet—the ‘prankster of the art world’—alludes to the strange, sometimes legally dubious, way he approaches his work.

Born in 1960 in Padua, Italy, Maurizio Cattelan came from humble beginnings. His upbringing was spartan and his family always knew he was an artistic soul. In a premature bid for independence and in pursuit of his artistic aspirations, he left home at 18 (very early by Italian standards).

In an interview with Italian Klat Magazine in 2010, he said: ‘There was a punitive air at home. […] My struggle for independence meant conquering autonomy, freeing myself from family discussions on every occasion.’

Cattelan’s artistic career began in Forlì, Italy, where he stayed for five years. During this time, he created installations, sculptures and performances which made fun of the art world and its paradoxes. In a nod to his later work, these early pieces criticised the dynamics of cultural production, social hierarchies and economic interests that dominate everyday life.

When he relocated to Milan in the late 1980s, Cattelan became fascinated with monthly art magazine, Flash Art. In 1990, he gathered copies of the publication and stacked them into a house of cards-style pyramid. The photo he took of his creation was featured on the magazine’s 155th edition.

For his first ever solo exhibition, Cattelan hung a sign from the gallery with the words ‘Torno subito’ (‘I’ll be right back’). But, perhaps succumbing to nerves, he never returned; besides, the gallery was totally empty.

Characterised by sculpture, installations and taxidermy, Cattelan’s work is contemporary art’s answer to Duchamp. The Paduan artist shot to worldwide notoriety in 1999 with La Nona Ora (The Ninth Hour), a sculpture of Pope John Paul II flattened by a meteorite. Utterly shocking—especially in Catholic Italy—the outlandish piece would define Cattelan’s iconoclastic style and cement his reputation as the art world’s resident trickster.

A joker by nature, Cattelan’s work has bordered on criminal activity (breaking into a gallery and stealing another artist’s work) and often defies good taste—Him (2001), a sculpture of Hitler in prayer, drew controversy after its installation the courtyard of a former Warsaw ghetto.

L.O.V.E (2010)—aka ‘The Middle Finger’, an almost five metre-tall marble hand with just the middle finger extended—appeared outside La Borsa (Stock Exchange) in Milan. The sculpture’s installation is typical of the irreverence and bitingly critical nature of Cattelan’s work.

In an equally controversial move, Maurizio Cattelan sold his exhibition spot at the prestigious Venice Biennale in 1993 to an advertising company, who placed a large billboard advertisement in the space.

Building his career on evasion, trickery and subversion, Maurizio Cattelan rarely agrees to interviews and uses a stooge to sit in for him instead. This enigmatic aura makes him one of the most highly sought-after artists for collectors worldwide.

Him (2001), for example, sold in 2016 for an eye-watering 12 million pounds at Christie’s auction, Bound To Fail, which featured work from seven rule-breaking artists.

Another of Maurizio Cattelan’s notable works was the golden lavatory he installed the Guggenheim. The piece, entitled America (2016), was a fully functioning 18-carat gold toilet, described by Cattelan as ‘100 percent art for the 99 percent.’

The importance of being different

The most intriguing thing about Maurizio Cattelan is not the mystery with which he enshrouds himself, nor the controversy he instils. Rather, it is how he keeps his critics, collectors and observers guessing.

In the contemporary art world, it pays to be different. Of that, Cattelan is proof.