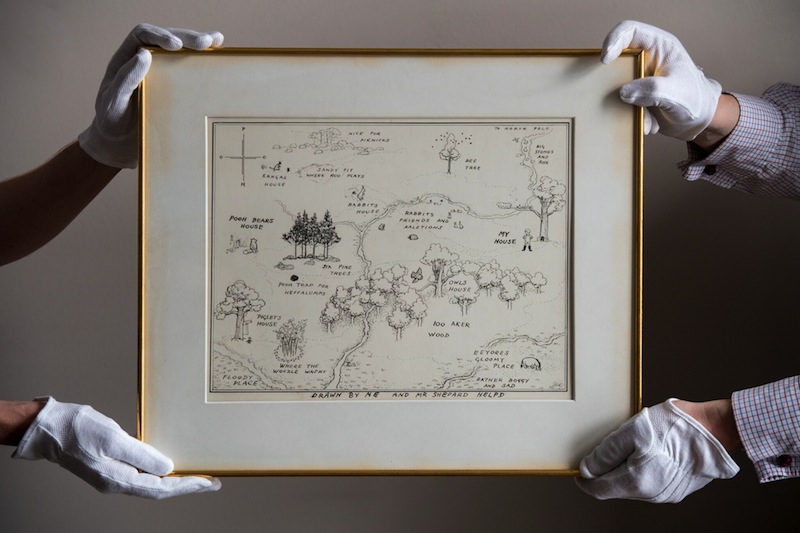 Unseen for half a century, the original 1926 copy of the map by E. H. Shepard—who drew all the original Winnie-the-Pooh illustrations—has set a new record for any book illustration at auction.

One of the most famous and loved settings in English literature, The Hundred Acre Wood has sparked the imaginations of countless children over the last century.

Dr Philip W. Errington, director and senior specialist, Department of Printed Books and Manuscripts, Sotheby’s said: ‘I suspect that there isn’t a single child who wouldn’t instantly recognise this wonderful depiction of The Hundred Acre Wood.

‘This is the first drawing you encounter in the book and is the visual guide to the entire world of Winnie-the-Pooh. In this group of original drawings, you can see the real skill of the artist, the skill of the strokes of his pen.’

Dr Errington argued E. H. Shepard’s unique talents, power and ability as an illustrator were why this was probably the most famous map in English literature.

The map, which features familiar locations such as Christopher Robin’s house, the ‘sandy pit where Roo plays’ and ‘Eeyore’s gloomy place’, introduces readers to the delightful imagination of Christopher Robin and his woodland friends.

The work is completed with effortless finesse and includes memorable motifs from the adored tale, such as Pooh’s ‘trap for Heffalumps’ and ‘where the wozzle wasn’t’—reminding the viewer of the strength of A. A. Milne’s unforgettable characters.

The sketch was offered with an estimate of £100,000-150,000 in Sotheby’s sale of English Literature, History, Science, Children’s Books and Illustrations.

Exactly 40 years after its creation, the map played a starring role in the landmark Disney film, Winnie-the-Pooh and the Honey Tree (1966), where it was brought to life as an animation in the film’s opening sequence.

As well as mapping the magical world of Winnie-the-Pooh, the sketch also captures the unique personalities of A. A. Milne’s much-loved characters. Eeyore is depicted in his ‘rather boggy and sad’ ‘gloomy place’ with his head hanging sluggishly in the grass, while the energetic Roo bounces towards the ‘sandy pit’ where he plays, as Kanga dutifully supervises. Wise-old Owl flies overhead, surveying the scene with his shrewd glare; meanwhile Rabbit’s friends and ‘raletions’ huddle together and natter the day away. And a solitary Winnie-the-Pooh sits thoughtfully looking out over the wood to his friend, Christopher Robin, who stands with boyish arrogance looking back.

The charming childishness of Christopher Robin is marked by clumsily spelt locations, such as ‘NICE FOR PICNICKS’ and ‘100 AKER WOOD’, as well as a compass marked with points spelling out the title character’s name. Shepard’s own amusing personality seeps into the illustration, as the map is signed off with the words ‘Drawn by me and Mr Shepard helpd’.