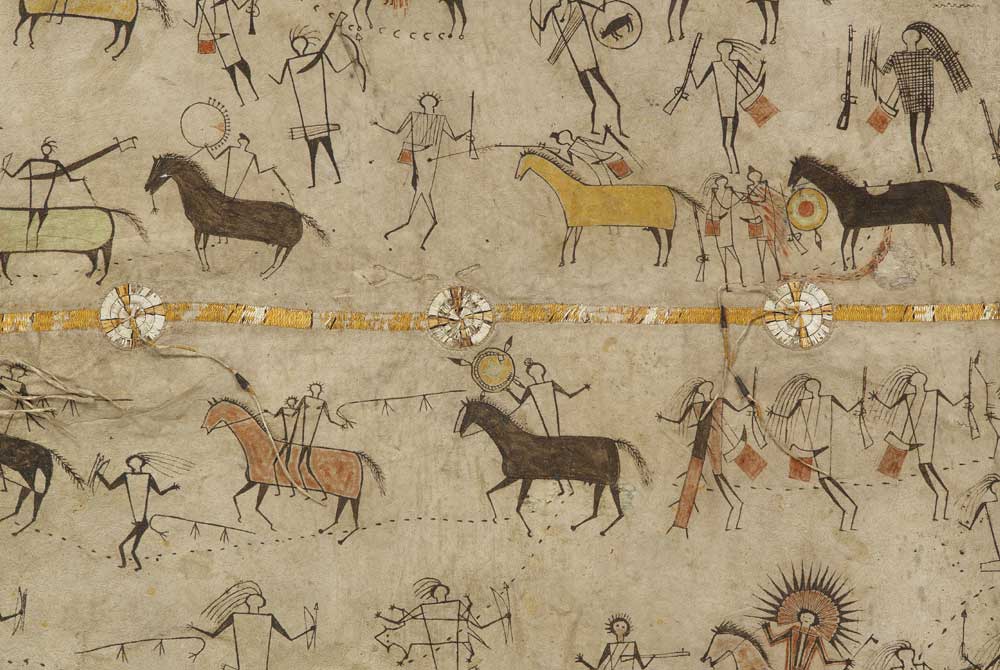 The beauty, power and spiritual resonance of Plains Indian art will be on view in a major exhibition that opens in April 2014 in Paris, then travels to Kansas City and New York City. The Plains Indians: Artists of Earth and Sky will unite Plains Indian masterworks found in European and North American collections, from pre-contact to contemporary, ranging from a 2,000-year-old Human Effigy stone pipe to 18th-century painted robes to a 2011 beaded adaptation of designer shoes.

Works of art collected centuries ago by French traders and travelers will be seen together with those acquired by Lewis and Clark on their famous expedition of 1804-06, along with objects from the early reservation era and contemporary works based in traditional forms and ideas.

The exhibition is being organized by Museé du quai Branly in Paris in collaboration with The Nelson-Atkins Museum of Art, Kansas City, and The Metropolitan Museum of Art, New York. It is curated by Gaylord Torrence, one of the nation’s leading scholars of Plains Indian art and the Fred and Virginia Merrill Senior Curator of American Indian Art at the Nelson- Atkins.

“It is our goal with this exhibition to present the extraordinary vision ofPlains Indian artists throughout time to the present,” Torrence said. “The objects embody both the creative brilliance of their individual makers and the meanings and power of profound cultural traditions.”

The exhibition was conceived by Stéphane Martin, President of Quai Branly, who traveled to the United States in 2010 to explore the idea. He visited the new and highly acclaimed American Indian galleries at the Nelson-Atkins and invited Torrence to curate the exhibition. When the Metropolitan Museum agreed to be the third venue, the tour was complete.

“American Indian art has always been a passion of mine,” said Mr. Martin. “I am thrilled that Quai Branly will showcase the finest of these works, and I know our visitors will relish the chance to see Plains Indians objects that have long fascinated Europeans.”

The works on view will reflect the significant place that Plains Indian culture holds in European history and in the heritage of North America. They will also convey the continuum of hundreds of years of artistic tradition, maintained against the backdrop of monumental cultural change.

“At the Nelson-Atkins, we are attuned to the living culture and the emerging contemporaryart from Native peoples, and our goal is to always honor and showcase the finest of those works,” said Julián Zugazagoitia, Director & CEO of the Nelson-Atkins. “We are proud of the role that the Nelson-Atkins—in the center of North America—holds in this important exhibition, and we are proud to build on the legacy established by the landmark exhibition Sacred Circles presented at the Nelson-Atkins in 1977. That was a defining moment in the understanding of Native American art, and we believe The Plains Indians will be another historic moment.”

Thomas P. Campbell, Director and CEO of the Metropolitan Museum, said: “Through outstanding works of art from the Plains region, this ambitious exhibition demonstrates the long history of change and creative adaptation that characterizes Native American art. It is an important opportunity to highlight the artistic traditions that are indigenous to North America and to present them in the context of the Met’s global collections.”

Norman Stevens Exhibition at the Royal Academy of Arts