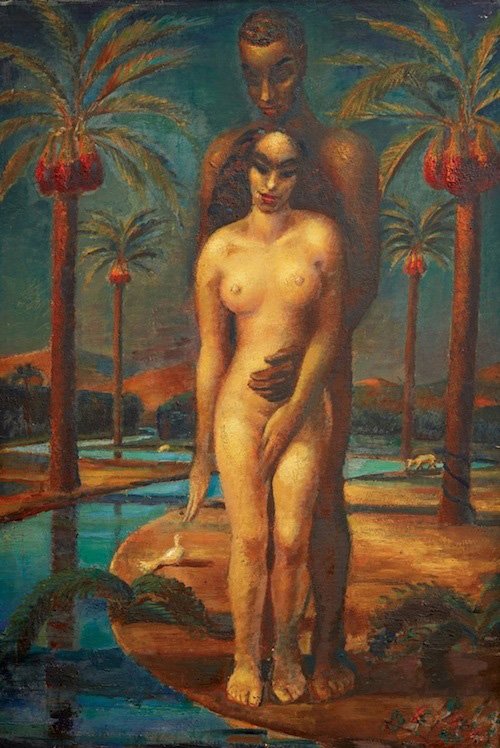 The colours, vivid and striking, offer a bold vision of the iconic duo, with their contrasting hues denoting the two halves of humanity they represent—implying more than just a visual reliance on each other. Here, they embody the evolution of relationships between men, women and their environment. Downplaying conventional male dominance, the work focuses on Eve’s feminine grace; her fertility is alluded to by the position of Adam’s hand on her abdomen.

Saïd’s representation of Egypt has been compared to Goya’s of Spain, Degas’s of ballerinas and Seurat’s of the circus. Inspired by Old Masters such as Lucas Cranach, Baroque artists Peter Paul Rubens and Rembrandt, and the romantic fantasies of modernist Paul Cézanne, Mahmoud Saïd drew on a plethora of influences in a continuous quest for the ‘magical light’ derived from an Egyptian consciousness. His works had the unparalleled ability to enchant and entice, romanticising Egyptian subjects in a characteristically whimsical and dream-like fashion.

Depicting the Nile’s turquoise inlets meandering through the scene, as they breathe life into the ripened palm trees overhead, Saïd places his stoic, central figures in an idyllic Egyptian setting. By introducing a biblical subject matter to a typical Egyptian landscape, the artist encourages the viewer—regardless of social standing—to see themselves as equal and important, as the Western Orientalist would.

Ashkan Baghestani, Sotheby’s contemporary Arab and Iranian art specialist and head of the sale, said:  ‘Seminal in its subject matter and the sheer force of painting, Mahmoud Saïd’s unique depiction of Adam and Eve is one of the most important works by the artists to ever appear at auction.

‘The painting embodies so many spheres of influence—from the works of Egyptian antiquity to the grand style of the European Old Masters and his own glorious depictions of the lush landscape of the Nile.

‘Having remained unseen for a quarter of a century, we are thrilled to be bringing this glorious work to auction this April.’

A vibrant and exciting international platform for modern and contemporary art from North Africa, Turkey, the Middle East and Iran in London, Sotheby’s 20th Century Art / Middle East auction in April will once again star highly-sought after masterpieces. The auction features rarely seen seminal works by celebrated figures with a strong institutional presence.

If you enjoyed this article, click here to read about Picasso’s first solo exhibition at Tate Modern.