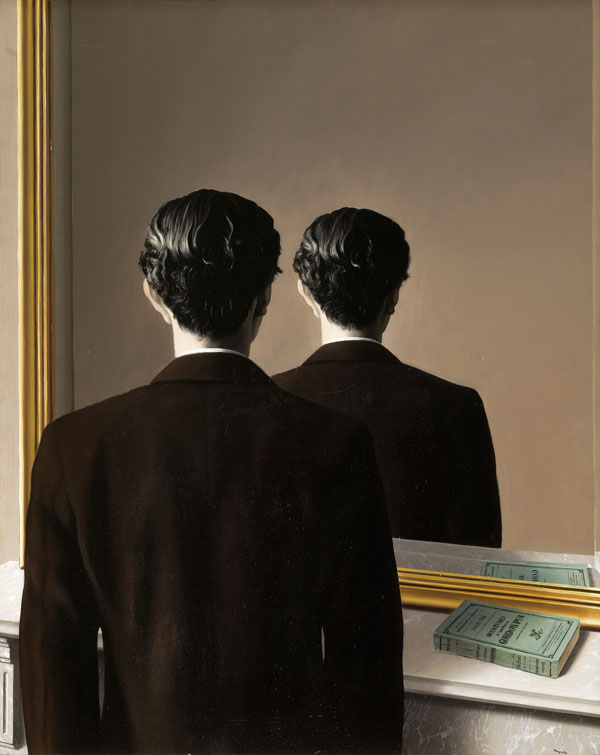 With the shock of the new very much in evidence in the first decades of the twentieth century, René Magritte’s art was unique in depicting the mystery of the ordinary.

Do you see what I see? How our brains interpret what we see can vary from one individual to another. The ambiguity of seeing has fascinated artists as far back as the Renaissance, and this puzzling phenomenon again took hold particularly in the first quarter of the last century.

The interpretation of what people saw in patterns or inkblots was thought to open a door into the subject’s imagination and consciousness. For example, the French psychologist, Alfred Binet, experimented with a ‘creativity test’ based on the interpretation of inkblots, and by 1921 Hermann Rorschach had created what would become his famous 10-card inkblot test. There are many examples of artists’ creative ingenuity and original interpretation of what they saw, both real and imagined. The 20th century brought us some of the most famous examples, particularly through the Cubist movement and the Surrealist movement, which frequently caused storms of derision at the time. Of the Surrealists, René Magritte is considered one of the most original and, in his day, one of the most controversial.

Visitors to the must-see Magritte exhibition, recently moved from the Menil Collection in Houston, Texas, to the Art Institute of Chicago, will certainly be refreshed and reminded by how this important Surrealist painter chose to represent what he saw and what he imagined. The exhibition is entitled ‘The Mystery of the Ordinary’, but the show is just as much about the mystery of René Magritte’s extraordinary vision and imagination. Although most of his pictures are familiar to us today, when the pictures in this exhibition were first produced (1926-38), their impact caused astonishment and a public response that was often far from positive.

As this new Surrealist movement was being established, the critic Herbert Read wrote (The Meaning of Art, 1931), ‘[the movement] is totally distinct from all other contemporary schools, and indeed makes a complete break with all the accepted traditions of artistic expression. Inevitably, therefore, it arouses the bitterest opposition, not only in academic circles (generally content to dismiss it as an absurdity), but even from those painters and critics who are normally accepted as modernists. But such blind opposition has so often proved wrong in the past that we should at least make an attempt to understand what these determined artists are driving at …’

Yes, hindsight is indeed a wonderful thing, and today we love Magritte for his wit, his intelligence, and his unique way of interpreting the mystery of the ordinary. It was just this attitude to ‘dismiss it as an absurdity’, to overthrow this oppressive rationalism of bourgeois society, that frequently inspired Magritte’s reactionary work.

Of all those artists grouped under the banner of Surrealism, Magritte’s art stands alone in terms of style. There is also his conscious challenge to reality that, at this stage in his career, sought to defamiliarise the familiar—to make, in his own words, ‘everyday objects shriek aloud’.

While many of Magritte’s pictures from this important period do ‘shriek aloud’, others whisper to us mysteriously—Magritte is questioning ordinary images and he is doubting images that are regularly taken for granted, then there are the mirrored images, the disturbing images, and the images half remembered that seem to have moved to a different plane of consciousness.

Magritte’s success is in showing us the complexities of ‘everyday objects’ can hardly be put better than words in the splendid exhibition catalogue, ‘The persistent tension Magritte maintained during these years, between nature and artifice, truth and fiction, reality and surreality, is one of the profound achievements of his art.’

Of these achievements it may be argued that across the span of this Belgian artist’s long life (1898-1967), the period covered by this exhibition, 1927-38, is his most important development period, giving us the essential Magritte. The exhibition shows us paintings and collages Magritte created in Brussels in 1926 and 1927, in anticipation of and immediately following his solo exhibition at the Galerie Le Centaure—the exhibition that launched his career as Belgium’s leading, indeed only, Surrealist painter—and then follows him to Paris, where he lived from 1927 to 1930, in order to be closer to the movement’s centre. The span of this exhibition concludes in 1938, the year Magritte delivered his ‘La Ligne de vie’, an autobiographical lecture that gave an account of his career as a Surrealist.

If you can’t make it to the exhibition, the accompanying book Magritte: the Mystery of the Ordinary is the next best option, as it is a volume that should be in everyone’s art book collection. Published under the imprint of the Museum of Modern Art, New York (and distributed in the UK by Thames & Hudson), the volume includes insightful essays by Anne Umland, Stephanie D’Alessandro, Joseph Helfenstein, Clare Elliott, Michel Draguet, and Claude Goormans, along with 132 plates of Magritte’s work.

During his lifetime Magritte enjoyed strong support and enthusiasm from America. Illustrating this support, there are no less than five pages of acknowledgements in this book; the great majority are American private collectors, national museums and galleries.

The Museum of Modern Art, The Menil Collection, and the Art Institute of Chicago have long been committed to Magritte’s work, with MoMA being the first major American Museum to acquire his work. In 1965 Magritte visited the United States for the first time—he attended the major retrospective staged by MoMA and then travelled to Houston, Texas, to meet his great patrons and friends, John and Dominique de Menil.

The foremost supporter of this exhibition is the show’s sponsor, the Bank of America Merrill Lynch (BAML), the global financial institution that is today one of the most proactive sponsors of major art exhibitions, conservation programmes, and art education. Allen Blevins, Director of Art & Heritage Programs, Bank of America Merrill Lynch, spoke to me about the Bank’s involvement with the Magritte exhibition and the Bank’s wider challenges and objectives through its global art sponsorship and conservation programs.

I wanted to know how the Bank had reached a decision to sponsor specific exhibitions. Here is Allen Blevins’ response:  ‘At a high level it is very much like putting together a puzzle because we have to evaluate a lot of different pieces of criteria: the first is the exhibition content—and the same evaluation process applies, by the way, whether we’re considering the visual arts or the performing arts. The second piece of the equation is looking at the different markets—the different cities in which it would be touring—and the third component is, what other sponsorships we may be doing in those respective markets within the specific time period of the planned exhibition. We factor in all those things and, as you can imagine, we’re in many of the major markets outside the United States and all the major markets inside the US, it is not a simple task.’

Of the opportunity to sponsor the Magritte exhibition, Allen Blevins says: ‘This was really a once in a lifetime chance to see Magritte’s work during this important period of his career (1927-38), when this period had not been pulled together in terms of an exhibition, and particularly not in the United States…’

Today, the Bank has a special division dedicated to its arts and culture support, and Allen Blevins was pleased to explain the connection between this and the Bank’s role as a global financial institution:  ‘The reason we support the arts is because we believe that the arts help people in communities to connect. We also believe a strong arts environment contributes to a strong local economy. So, ultimately, what is good for the communities in which we do our business is also good for our company. While there may not be a direct connection, there is absolutely an indirect connection.’