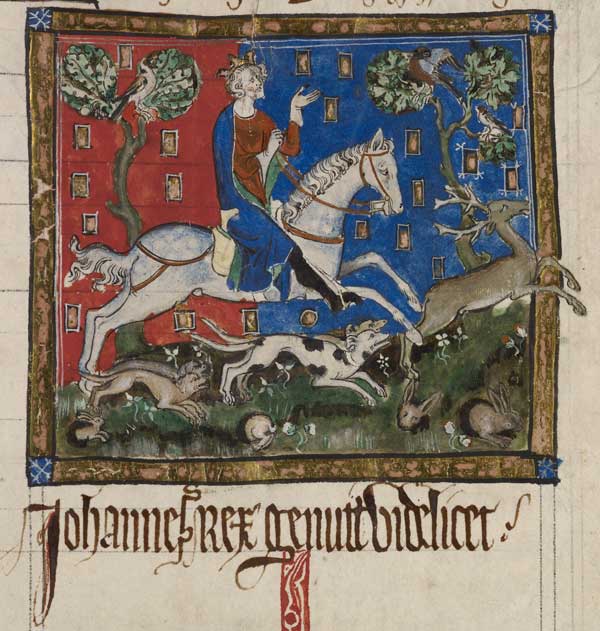 800 years ago saw the founding of our modern constitution and democracy with the sealing of Magna Carta in 1215. Recent conservation work on two surviving copies has ensured the documents are among the highlights of the 2015 anniversary celebrations.

History has cast him as the most inept king in a long line of kings. Disney has cast him as a greedy, overtaxing and evil monarch whose tyranny is challenged by the heroic Robin Hood and his Merrie Men. In the classroom, myths and legends about King John the Bad (so bad, no English king has been named John since) informed us that the wayward king also lost the Crown Jewels in the Wash and died of a ‘surfeit of lampreys’ (in fact the cause was said to be food poisoning, probably due to eating fish that was past its sell-by date).

However much of this is fact or fiction, an undeniable fact is that King John was the catalyst that caused the drawing up and signing or ‘sealing’ of Magna Carta—the great charter—800 years ago this year, on June 15, 1215, at Runnymede, a tranquil water-meadow by the side of the River Thames in Surrey.

A beam of light

Today, Magna Carta shines out to us like a beam of light from the Dark Ages because what is enshrined in the great charter forms the basis of our constitution and our democratic rights in the Western World—to the extent that Magna Carta’s principles are even reflected in America’s Bill of Rights, 1791 (nine of the 26 provisions in the Bill of Rights can be traced back to the Magna Carta), as well as other modern historic constitutional documents.

In political terms, King John’s biggest failing was that he was no diplomat and was unable to see the bigger picture which, to simplify, caused him to lose large amounts of inherited possessions, particularly the lands in France of Normandy and Anjou, caused a disastrous argument with Pope Innocent III in 1209 that led to his excommunication. In the homelands, King John also faced a civil war and a rebellion by the powerful English barons. Provoked by the latter, especially, and in order to quell the dangerous unrest in the land, Magna Carta was drawn up, a charter that limited royal power and restated an enhanced English law.

In his History of the English-Speaking Peoples (published 1956-58), Winston Churchill summed up as follows: ‘When the long tally is added, it will be seen that the British nation and the English-speaking world owe far more to the vices of John than to the labours of virtuous sovereigns; for it was through the union of many forces against him that the most famous milestone of our rights and freedom was in fact set up.’

The original ‘famous milestone’ miraculously survives today. In fact there are four surviving copies of the first Magna Carta issued on June 15, 1215, and sent to every cathedral and important religious house in England (two are held by the British Library, one at Lincoln Cathedral and one at Salisbury Cathedral).

Magna Carta was reissued several times but the reissue in 1225 is the most important.  Those monastic communities that didn’t receive one of the officially sealed charters or its reissue commissioned their own copies—and three of those copies are held by the Society of Antiquaries of London.It was funding by Bank of America Merrill Lynch’s 2014 global Art Conservation Project that has enabled the conservation work on two of the Society’s three copies—a 1215 draft and the 1225 reissue, both of which were in need of repair. BoAML’s grant means that all three copies of Magna Carta will be on public display for the first time in 2015.

Andrea Sullivan, Head of Corporate Responsibility, explains: ‘Our Art Conservation Project is one where institutions around the world can apply for a grant from our Foundation to conserve a piece of work that’s historically or artistically important to their collection. So the Society of Antiquaries came to us and their request for Magna Carta conservation funding fitted very well with out objectives, which are to help build cultural understanding in tune with public interest—and we felt there could be nothing more appropriate than supporting a programme related to the foundation of western democracy, which is what Magna Carta is.’

An inspiration for the wider public

Providing inspiration, education, and opportunity for the wider public, especially young people, is how Andrea Sullivan sums up BoAML’s enlightened arts funding objectives, adding that it is a ‘fundamental responsibility’. BoAML is also one of the world’s foremost sponsors of major art exhibitions, most recently having sponsored Matisse: The Cut-Outs and Magritte: The Mystery of the Ordinary, show in Britain and America that have seen record-breaking attendance.

Heather Rowland, Head of Library & Collections at the Society of Antiquaries, tells me that in the environmentally controlled strongroom in Burlington House, Piccadilly, they have documents dating back to the 10th century, amongst which the Society’s copies of the Magna Carta are the prized possessions. So, just how many copies of the great charter have survived today? ‘It’s very difficult to say how many copies there were and how many have survived today.

When the original was sealed in 1215, copies were made and these copies were sent throughout England to the sheriffs, monasteries, shires and so on. There are four of the original copies surviving: two in the British Library, one in Salisbury Cathedral, and the other is in Lincoln Cathedral. The charter was re-issued in 1216, 1217 and finally 1225. We know of one copy of the 1216 reissue in existence and four copies of the 1217 reissue. The 1225 reissue is the most important in many respects because it is Magna Carta in its final form.’ Referring to the charter as the ‘cornerstone of democracy and human rights’, Heather Rowland goes on to say that current academic research is looking at the different drafts and reissues, together with a close scrutiny and comparison on the texts.

Two of the Society’s three copies have undergone conservation, but this was found to be unnecessary for the third copy, which has survived as a roll document and is the only one of this type known to exist. The Society doesn’t have its own conservation facilities so this meant sending the precious documents out to accredited freelance conservators. The basis of the conservation has been structural repairs to bindings together with conservation and surface cleaning of the vellum pages.

It sounds straightforward but although vellum is a tough material, as history has shown, vellum is a hygroscopic material that reacts relatively quickly to changes in humidity and temperature which is why, says, Heather Rowland, environmentally controlled conditions are important for the preservation of these documents for posterity. However, ‘The second of the two documents is in much poorer condition, having suffered water damage at some time; some of the pages also have some very nice illuminations and so an analysis of the pigments etc., has been necessary in order to stabilise them.’

Of the funding from BoAML, Heather Rowland says: ‘It’s not just the very welcome funding that’s been provided; they’ve also been incredibly supportive of the whole project. We’ve been thrilled to have this relationship, as well, of course, as being able to go ahead with the conservation project itself.’The Society of Antiquaries will display all three of its copies of the charter in the exhibition Magna Carta Through the Ages at its apartments in Burlington House, Piccadilly, London from May 26 to July 31, 2015 (find out more at www.sal.org.uk/magna-carta).

The Magna Carta 800th website magnacarta800th.com has details of events nationwide during 2015.

Diebenkorn in the UK, at Last