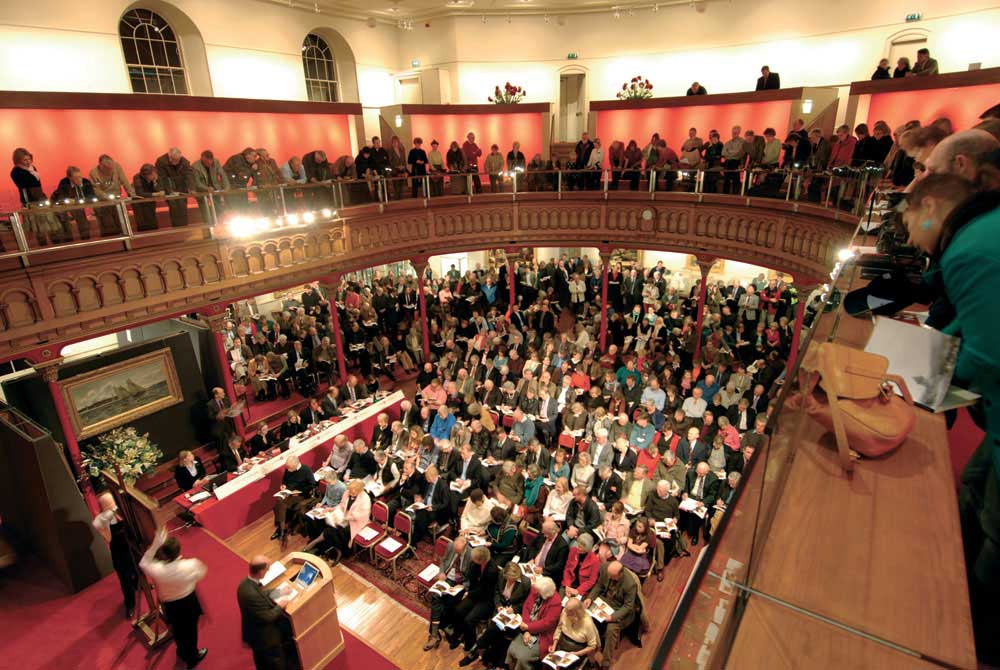 With record sales by competitors Sotheby’s and Christie’s and the economic downturn still on everyone’s mind, life cannot be easy for Scottish auction house Lyon & Turnbull. And yet, Paul Roberts, vice chairman for the past 11 years, looks on the bright side: ‘Two years ago things were pretty difficult, but they have improved and we deliver a solid performance once again. The most important part of what we do is dealing with private collections and the results from that have been extremely encouraging.’

Today, Lyon & Turnbull’s blue-ribbon sector is the picture department, which is led by Nick Curnow, the world’s leading auction authority on Scottish pictures, but they also increasingly deal with international art. The auction house also prides itself in having a major furniture presence outside of London.

Another area of expertise is the specialised Asian department. For Roberts, probably the most extraordinary piece he has ever come across was an early Chinese vase; a Chinese celadon moonflask with a Yongzheng mark and scrolled handles to the sides.

It is decorated with moulded stylised chrysanthemum heads and foliage and has a blue painted character mark. It sold for £275,000. Roberts enthuses: ‘It is very much in the news now, but at the time we were taken by surprise how high it went. We were thinking tens of thousands and not hundreds of thousands.’ For him, the most exciting part of his job are the people he gets to meet: ‘It’s not just the wonderful objects and pieces of art you see every day.

Equally important, if not more important, are the extraordinary people you meet throughout the years. For me, it’s like Christmas every day. I am still doing the furniture sales and the book sales, which I enjoy greatly.’

The beautiful auction house is situated in the heart of Edinburgh. ‘It has a magnificent space for displays inside,’ says Roberts. ‘There is also a café incorporated in it, where people can enjoy a coffee from 9am onwards and review the objects.

You can bid either live or you can leave an absentee bid with the auctioneer or you can bid by telephone.’ Lyon & Turnbull also offers online bidding, where bids from all around the world go into one server, which sorts them and shows the highest bids, which are then relayed to computers in the saleroom. ‘Here it can happen that bidding goes outside what is expected. It can go from £3,500 to £5,000 in one go because lots of people are bidding on the internet.’

One of the biggest surprises in Paul Roberts’ career occurred when an extraordinary document was found in a country house on the English/Scottish borders. It’s called the Codex Stosch and dates back to the Renaissance. The Codex consists of 23 folios of early sixteenth century drawings of ancient Roman arches and temples by a member of Raphael’s circle, Giovanni Battista da Sangallo (1496-1548).

It’s believed that they are Raphael’s lost reconstruction of ancient Rome, proposed in his famous letter to Pope Leo X. Even though the drawings in the Codex Stosch cannot directly be connected with Raphael’s reconstruction, the drawing do give us a strong impression of what it would have looked like. The document sold in July 2005 for £230,000 and is now in the Royal Institute of British Architects in London.

Since 2000, Lyon & Turnbull’s international rise has been aided by a strategic marketing relationship with Freeman’s, America’s oldest auction house based in Philadelphia. Sharing expertise and cooperation in selling works of art in the best possible venue has made Lyon & Turnbull the fastest growing auction house in the UK.

With offices in Glasgow, London and Cheshire, and the saleroom in Edinburgh, one of the major events for Lyon & Turnbull this year was the first ever sale dedicated entirely to Scottish design, with several Mackintosh pieces and some store items from Liberty’s, which took place on June 15. Another first will be a joint Old Masters sale and an international furniture sale in the autumn with Freeman’s, also featuring a joint catalogue.