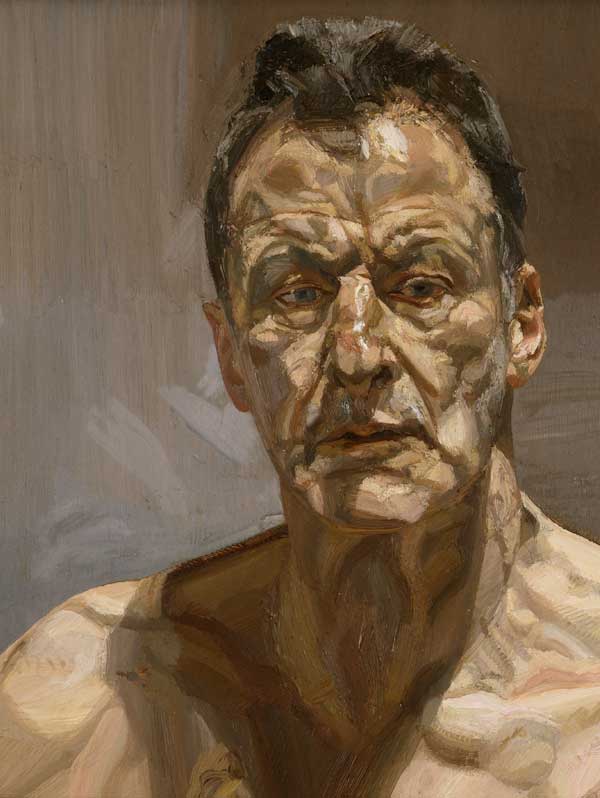 A salute to Lucian Freud, the great British artist, as he approaches his ninetieth year.

Lucian Freud, now in his eighty-ninth year, is widely regarded as one of our most important contemporary figurative painters. Primarily a painter of people, Lucian Freud has concentrated during his lifetime on intimate portraits, especially of family, friends, lovers and children and says that it is a person’s ‘aura’ that sparks one’s excitement and is his starting point.

From an early age, drawing and painting were passions for Lucian Freud—who remembers being brought up in a Berlin house hung with paintings. He particularly recalls a Dürer watercolour of tangled grass stems, Hokusai prints and reproductions of Brueghel’s The Seasons that had been given to him by his grandfather Sigmund Freud. In 1933, as the unsettling beginnings of the Nazi regime began and there seemed little doubt of what the fate of the Jews would be, the family decided to move to England.

Lucian Freud, aged eleven, was sent to Dartington’s preparatory school and then on to Bryanston. Here he was apparently very rebellious and was disciplined with enforced ‘punishment runs’, but as he enjoyed long-distance running this had no effect on his unruly ways. Finally, he was, in his words, ‘sacked’ for his ‘disruptive influence on the community’. To Lucian Freud’s delight, his parents sent him to London’s Central School of Art and Crafts, where he was to study during his mid-teens.

During this period he began to explore the more bohemian aspects of London life, meeting Stephen Spender, Peter Watson (the founder of Horizon) and Cyril Connolly (the magazine’s editor). Lucian Freud’s reputation as a boy prodigy was confirmed through his fiercely delineated line drawings, which Horizon began to publish. Life at the Central School must have seemed very dull in comparison and it was not long before he decided he had had enough of it, stating that the only thing he had learnt there was how to play ping-pong.

However, still avidly keen to improve his painting skills, Lucian Freud enrolled at the eccentrically-run East Anglian School of Painting and Drawing in Dedham, Suffolk. Tutored by the self-taught painter and inventive gardener Cedric Morris and his companion Arthur Lett-Haines, Lucian Freud was encouraged to trust his eye, disregard the formal methods of perspective, and paint freely both from the imagination and from life. ‘As a young man I was not obsessed with working in a specific way, even though I felt very little freedom.

The rigidity of Surrealism, its rigid dogma of irrationality, seemed unduly limiting. I could never put anything into a picture that wasn’t actually there in front of me. That would be a pointless lie, a mere bit of artfulness.’

Despite his words, Lucian Freud’s early drawings—dead animals, a bird, a monkey, a stuffed zebra head appearing as though through the window of someone’s living room—do possess a surrealistic and often dream-like quality. Though evidently drawn from life, their memorable and frequently disturbing imagery is perhaps due to unexpected combinations of objects.

By the mid-1940s people had become the main focus of the great British artist’s work. Village Boys, painted in 1942, features a main figure, maybe the leader of the gang and probably the ‘bully’ village boy. He looks unnaturally still, as though caught ‘in the act’, with his clothing still dishevelled from some skirmish or other and his small hands, one painted curiously in reverse, uneasily folded on his lap. One is immediately captivated by the kaleidoscope of images which seems to represent memories or a staggered sequence of time.

When Lucian Freud began painting people that were particularly close to him his development was ensured, confirming his stature as a significant painter. Referring to Girl with Roses, a portrait of Kitty Garman (his first wife, the daughter of the sculptor Jacob Epstein), Lucian Freud said quietly ‘I wanted to convey that she was the first person I was really caught up with.’

In this intimate portrait, reminiscent of early 14th-century Flemish painting in its smooth flatness, everything is minutely observed—from the tendrils of the young woman’s dark hair to the texture of her clothing and the broken cane-work of the chair on which she is seated.

Unlike Picasso, whom he met when visiting Paris in the summer of 1946, Lucian Freud is intensely guarded about both his work and private life: ‘I hate being watched at work. I can’t even read when others are about.’ He has lived and worked in west London (Paddington and later Shepherd’s Bush) all his life. At the top of the house, the studio looks over rooftops. It is here that his regular group of sitters come to be painted, a working routine of  ‘day’ and ‘night’ paintings giving him the opportunity to paint them whenever they can give their time—most have been coming regularly for over thirty years.

Lawrence Gowing records that when Lucian Freud drew him he worked from several angles rather than from a fixed point. ‘I take readings,’ Lucian Freud said, ‘from a number of positions because I don’t want to miss anything that could be of use to me. I often put in what is round the corner from where I see it, in case it’s of use to me. It soon disappears if it is not. Towards the end I am trying to get rid of absolutely everything I can do without. Ears have disappeared before now.’

During the 1950s, Francis Bacon, Frank Auerbach and Michael Andrews were among Lucian Freud’s group of friends who frequented The Colony Room, a renowned Soho drinking club. In 1952 Lucian Freud painted one of his best-known portraits: Francis Bacon was the subject of this extraordinarily enigmatic portrait of the painter with eyes lowered, which combines a feeling of uneasy tension with poignancy to amazingly powerful effect. Acquired by the Tate Gallery, the painting was stolen in 1988 while on loan to an exhibition in Berlin and has, unfortunately, never been recovered.

It was the 60s, however, which were to become an important transitional period for Lucian Freud. He had become increasingly dissatisfied with his objectives and recognised that a bold reassessment was needed: ‘My awareness that I wanted to work in a different way was fired by a period of unhappiness that made it impossible for me any longer to paint sitting down. You know how you can’t sit down when you’re unhappy? I was aware that my work wasn’t a vehicle for my feeling … no, that’s not quite right. I didn’t want my work to carry feeling in an expressionist way. I had never questioned before that my way was the only way I could work. I saw there was something wrong about the distance between how I felt and the way I was working. I felt I was doing art work.’

A move away from portraiture in the conventional sense led Lucian Freud to explore contemporary issues such as dependence and independence, alienation and loneliness, using the nude figure as a vehicle. With his subject (always a close friend or relative) devoid of the mask of clothing, he could create the conditions he required. The vulnerability of the relationship between himself and the posed figure or group, as well as between the figures themselves, could be explored.

‘The painting is always done very much with their cooperation. The problem with painting a nude, of course, is that it deepens the transaction. You can scrap a painting of someone’s face and it imperils the sitter’s self-esteem less than scrapping a painting of the whole naked body. We know our faces, after all. We see them every day, out there at large in the mirror or the photo. But we don’t scrutinise our bodies to the same degree, unless we are professional models, whom I don’t use, or extreme narcissists, whom I can’t use.’

To search beneath the surface of reality and yet be truthful to appearance was also partly achieved through a change in painting technique. From using the sable brushes that produced the smooth surfaces of his earlier work, Lucian Freud changed to using hog-bristle brushes, which resulted in a heavier impasto that enabled him to vary the painting of flesh or material surfaces with more expressively descriptive brush strokes.

‘I want paint to work as flesh, which is something different. I have always had a scorn for “la belle peinture” and “la delicatesse des touches.” I know my idea of portraiture came from dissatisfaction with portraits that resembled people, not like them. I didn’t want to get just a likeness like a mimic, but to portray them, like an actor. As far as I am concerned the paint is the person. I want it to work for me as flesh does.’

From small, intimate studies that have the sheen and delicacy of freshly picked wild flowers such as his exquisite painting of Buttercups (1968), Lucian Freud moved on to the looser, textured surfaces of his later work.

In his later and much larger paintings, Lucian Freud makes no preparatory drawings but works directly onto the canvas, first with charcoal and then paint, adding an additional section to the canvas if he feels the composition needs enlarging: ‘I’d rather it ran off the edge of the canvas than have to cramp the forms.’ Usually the perspective is from above, with the floor tilted upwards towards the picture plane giving an uneasy tension, while the figures are placed so that the viewer questions rather than accepts the figures’ relationships to one another.

As the great British artist Lucian Freud says, it is the unattainable that drives him on: ‘A moment of complete happiness never occurs in the creation of a work of art. The promise of it is felt in the act of creation but disappears towards the completion of the work.

For it is then that the painter realises that it is only a picture he is painting. Until then he had almost dared to hope that the picture might spring to life. Were it not for this, the perfect painting might be painted, on the completion of which the painter could retire. It is this great insufficiency that drives him on. Thus the process of creation becomes necessary to the painter perhaps more than it is in the picture. The process, in fact, is habit-forming.’