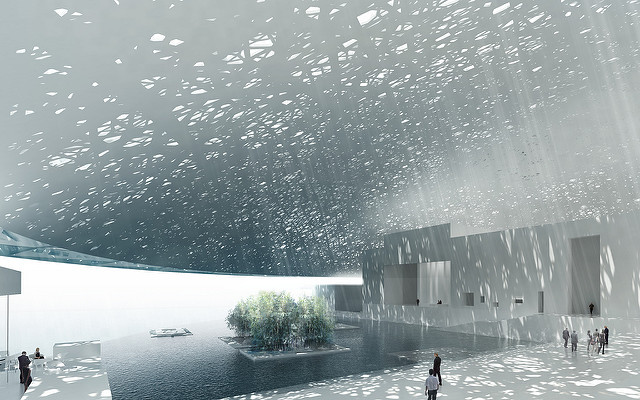 An announcement has been made for the official opening date for Louvre Abu Dhabi. The museum is set to be the first of its kind in the Arab world and its unique architecture sets it above from the rest.

On 11 November 2017, the public will be able to enter the new universal museum that will exhibit human stories from across civilisations and cultures.

There will be a great festival of opening celebrations that includes performances, symposiums and visual art by contemporary and classical artists.

Louvre Abu Dhabi has been 10 years in the making—the Louvre in Paris announced the plans for this new museum in 2007. The project was first estimated to be completed by 2012, however, some obstacles caused the opening date to be delayed. Nevertheless, this official date has been widely anticipated for many years and art enthusiasts across the globe will be excited to finally take a look inside.

Jean Nouvel, the architect of the Louvre Abu Dhabi said: ‘Louvre Abu Dhabi will open in two months. After several years of studies and construction, guests will be able to ener this place of light, this revelatory meeting place of a number of planetary cultures beyond the seas and centuries. It is an architecture that is protective of its treasures, it is a homage to the Arab city, to its poetry in geometry and light, and, under the large cupola, it is an evocation of the temporalities which inexorably punctuate the hours, days, and the passing of our lives.’

Still, the loan will benefit France. It has been reported that the right to use the Louvre name cost Abu Dhabi US$525 million, with additional costs for art loans, expertise and special exhibitions. The agreement between France and UAE allows the Louvre name to be used for 30 years and six months.

Works from Paul Gaugin, Claude Monet and Vincent Van Gogh are set to be featured, as well as a ‘monumental work’ by Chinese contemporary artist Ai Weiwei.

The Louvre Abu Dhabi is to be located on Saadiyat Island (‘Happiness Island’ in Arabic). Saadiyat Island underwent a major renovation that transformed the land from a desert island to a cultural hub. Alongside the Louvre, the government has built a New York University campus and a Guggenheim Abu Dhabi.

Manuel Rabaté, Director of Louvre Abu Dhabi, commented: ‘With a unique global narrative and a vision to explore the history of art in a fresh context, Louvre Abu Dhabi is a place where visitors can come to understand their own and others’ cultures. Its ground-breaking architecture complements a presentation of exceptional treasures that represent a snapshot of humanity’s creativity, and paves the way for new discussions.