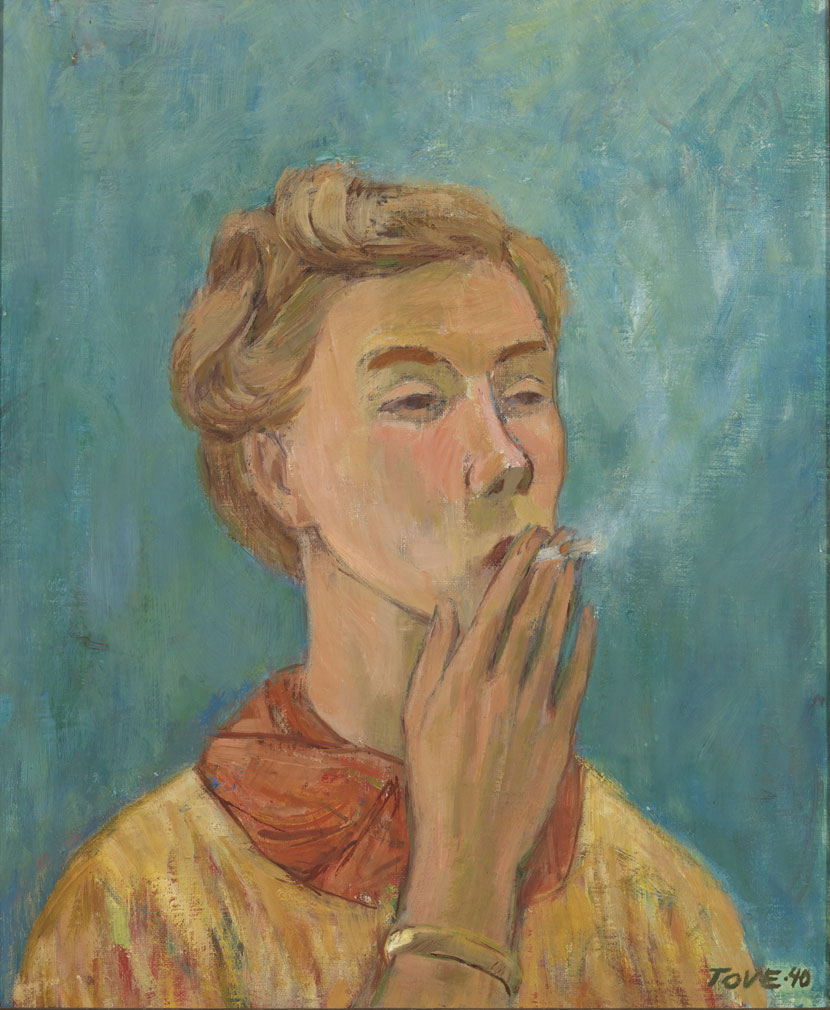 Over a freely flowing stream and past the towering Lonely Mountains is a curious blue house, in that house live the Moomins—some of the best-loved characters in children’s literature. These magical blob-like creatures are the brainchild of Swedish-speaking Finnish author and illustrator, Tove Jansson. From 25 October until 28 January, the Dulwich Picture Gallery in London will be casting a net of intrigue as Tove Jansson’s newest UK exhibition comes to life.

Upon their inception, Jansson captured the imagination of millions through her peculiar creatures and their adventures in Moominvalley. The first Moomin book was published at the end of the Second World War. Although it was structured as a children’s fable, it was a darkly imagined fantasy of a world almost destroyed by a flood. Many people credit her series of books for being the catalyst of the “Scandi noir” genre. After the initial success of her comic strips and books, her characters were transferred from the page onto the television screen. The first Moomin cartoon debuted on 20 September 1954. From there, they were immortalised in an array of merchandise from fridge magnets to fluffy toys. Even a museum has recently opened in Finland to celebrate the visionary figures.

It has also been announced that a new animated series, Moominvalley, will air in the spring of 2019—involving the vocies of stars such as Kate Winslet, Rosamund Pike, Taron Egerton and Will Self. While it is not the first cartoon animation on the subject, it is the first co-British production, with Steve Box of Wallace and Gromit announced as director.

Despite her success, there was a side to Jansson’s work that has remained almost wholly unknown to many people outside of Finland. From the perspective of most art enthusiasts, Jansson would not be high up on the pecking order of legendary historical artists. One could even argue that her illustrative musings overshadowed her reputation as a serious painter. The Dulwich Picture Gallery’s new retrospective seeks to remedy this.

‘I feel sorry for Tove really. The Moomins brought her fame and money, which bought her freedom, but they also cannibalised her time and creative energy and distracted her from what she considered her real work,’ remarks Clare Simpson, head of exhibitions at the Dulwich Picture Gallery.

Jansson’s wider output of graphic illustrations and paintings reveal a mature finesse; she explored a broad spectrum of styles that are delightfully surprising. Director of the gallery, Jennifer Scott comments: ‘I’ve surprised myself at how drawn I feel to them [her paintings]. She fits perfectly into one of the things we do best at Dulwich, which is to take a very unfamiliar name, or a name people think they know, and show a completely different aspect to their work.’

The collection implores attendees to look past the legend of the Moomins and consider a new perspective of Jansson’s artwork. One of the most prominent pieces within the exhibit is Smoking Girl (1940): a self-portrait of Tove Jansson herself. The use of mottled colours and expressive brush strokes make the painting feel serene and contemplative. The artist is captured pursing her lips to take a puff on a slim cigarette. Other canvases within the show exemplify Jansson’s artistic diversity, with a number of landscapes and other interesting subjects being included. Mysterious Landscape (c.1930) is one such example, which adopts a sumptuously dark palette. Rolling hills are emblazoned with red trees; the painting has a distorted effect on the eye and a distinctive feel of intrigue.

The retrospective tracks the key stages of the artist’s prolific career. As Jansson continued with a range of illustrations she still followed her passion for painting. But Jansson’s loveable Moomintrolls are not completely absent from the exhibition. In fact, the final room of the display is dedicated entirely to them. While Jansson always wished to be considered a painter, according to Sointu Fritze—the exhibition’s curator—she retained an attentive commitment to the little creatures that had originally brought her success. ‘Although Tove Jansson was sometimes tired of the Moomins or frustrated to be known primarily as the “Moomin Mamma who can also paint”, she did take the work on Moomins as seriously, with a strong devotion, as her painting,’ Fritze says.

If you have enjoyed this article: ‘Looking past the Moomins: Tove Jansson’s First UK Exhibition’, click here to read more on Arts & Collections about Loving Vincent, the first fully painted feature film in history.