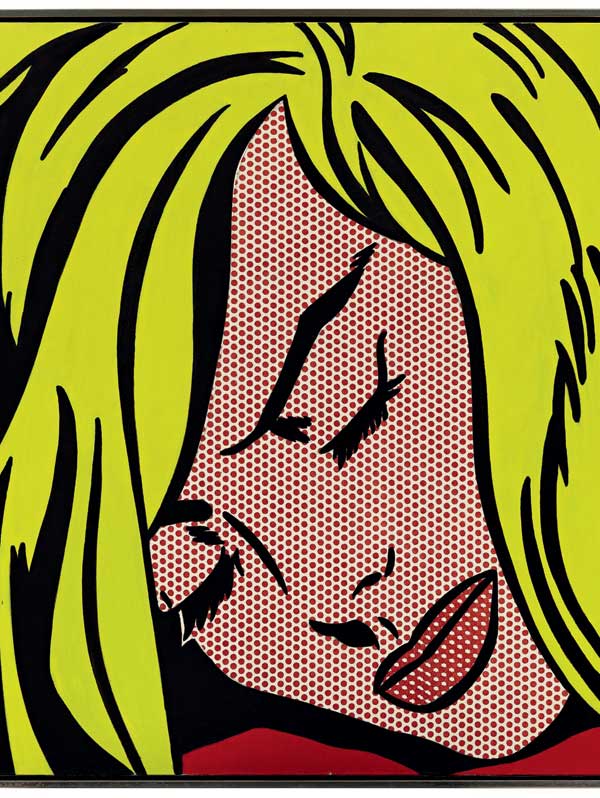 1962 was a landmark year for the art world. Pop Art arrived in New York City with a one-man show by Roy Lichtenstein (1923-97). The exhibition caused a sensation, with the shock-of-the-new grabbing media attention and taking the Pop Art movement forward on a wave that lasted for more than 20 years.

Some of the most iconic images we know so well today (Lichtenstein’s Whaam, Warhol’s Campbell’s Soup Cans, and many more) produced a dynamically different art scene in the early sixties. It was a big-statement art scene, one that included pastiche and parody; it reflected the popular culture of the time, from the world of advertising, comic strip books and the popular media.

Although Lichtenstein had exhibited in New York for at least ten years previously, 1962 was the significant year. No fewer than 15 exhibitions took place in the US that year that either contained works by Lichtenstein or were one-man shows.

It was the year of his first fine art paintings based on All-American Men of War comics, such as Blam, Takka Takka, and Live Ammo. It was the year Newsweek magazine reviewed his show at New York’s Leo Castelli Gallery and reproduced Girl with Ball.

Fifty years on from that seminal year for Lichtenstein and the Pop Art Movement, a work by Lichtenstein coming up for sale on the open market is a rare occurrence, which is why we will be focusing on May 8 with particular interest, the date when Roy Lichtenstein’s painting Sleeping Girl (36in x 36in) comes up for auction at Sotheby’s New York, with an estimate of $30-40 million.

I talked to Sotheby’s Worldwide Head of Contemporary Art in New York, Tobias Meyer, the man who will be auctioning the painting on May 8. I suggested to him that the transition artists can make from the avant-garde, from being the enfant terrible, to the establishment is always fascinating. And I asked: do you think that Roy Lichtenstein’s work now lacks quite the ‘shock of the new’ it had in the sixties, although his wittiness remains as powerful as ever? … the wittiness of his parodies?

We spoke to Irving Blum [New York art dealer] who sold this painting in 1964, who said he was just blown away by this new language that emerged in 1961, 62 and 63—away from abstract expressionism toward this clear, powerful imagery that had to do, significantly, with today’s world. Shocking, amazing and completely engulfing, you couldn’t get away from it—you ran towards it as if it was the future. Irving was talking about masterpieces, about beauty and about impact. So today, yes, I think it’s lost its shock value but what it’s retained—and this is the strength of Pop Art and all great paintings—it has not lost its impact and its visual power.

A&C: You’ve previously stated that the transformation of mass-produced commercial images into the realm of Fine Art is unequivocally one of the most important principles of twentieth century art practice. Are we thinking particularly of Warhol here? Could you expand a little more on that statement and on what these principles are?

TB: It goes back to Marcel Duchamp (1887-1968) who took pedestrian objects and presented them as art—this really liberated twentieth-century artists to do whatever they wanted. It allowed Lichtenstein, Warhol and others to have their take on everyday images, elevating them to art. Those are the important and pivotal principles I’ve referred to and without Duchamp it would not have happened in this way.

A&C: Roy Lichtenstein’s Sleeping Girl has been in private hands for some 48 years and I think has been seen only once in public since that time. With this lack of exposure, doesn’t that make it very difficult to put an estimate on this picture?

TB: I’d say the fact Sleeping Girl hasn’t been seen public for so long merely creates more auction magic. So the estimate is based on what happened at auctions six months ago and a year ago for two 1960s Lichtensteins that were sold at auction, both in the mid-40s [million dollars], so we estimated $30-40 million just to make sure we don’t overprice this picture in the public realm.

A&C: I don’t know what the Gershes would have paid for Roy Lichtenstein’s Sleeping Girl in 1964 (is that recorded?) but presumably today’s high prices reflect the growing stature or significance of Roy Lichtenstein’s work over the last 50 years. Has it reached its peak? Or might this continue upwards, given the major Lichtenstein retrospectives in Chicago this year and at London’s Tate Modern next year?

TB: Yes, it’s recorded—in 1964 the Gershes paid $1,600 for this painting. And, yes, the upcoming retrospectives this year and next will help create additional interest in the sale of this painting. However, Lichtenstein’s paintings have always been hard to get, even at the time Lichtenstein was painting them. Leo Gersh was actually there at the time Irving Blum uncrated the painting for the New York exhibition and said to Blum, ‘That’s my painting!’ So Blum responded, ‘OK, I guess I have to sell it to you.’

The growing of the prices for Lichtenstein’s paintings is very much like that of the other artists in that stable. It’s just the same for Warhol, for Jasper Johns, Robert Rauschenberg and so on. There’s a whole group of post-war artists who are expensive, so Lichtenstein’s prices will not necessarily develop in isolation but together with all other masterpieces of twentieth-century art that come to market. A great Picasso is now worth, say, $150 million—in 20 years all these masterpieces of the twentieth century will be similar in price points. So there is more room for Lichtenstein’s price development. And there will be less and less of them for sale. He’s as important as all the other twentieth-century giants.

I concluded by asking Tobias Meyer, famed for his deft raising of the level of excitement, as well as the bidding, if he felt great pressure when auctioning such a significant work of art: ‘I like it! Stress is a good thing for me. The sale will be one of our great highlights of the year. It will be a lot of fun!’

If you’ve been caught up by Tobias Meyer’s infectious passion for this painting, and even if you don’t have $30-40 million to spend just now, there’s a unique opportunity for the general public to see Roy Lichtenstein’s painting, Sleeping Girl, as Sotheby’s has organised a tour of this picture in Sotheby’s salerooms in Los Angeles, Hong Kong, London and New York prior to the sale in New York on May 8.

Find out about impressionists inspired by Japanese art tradition.