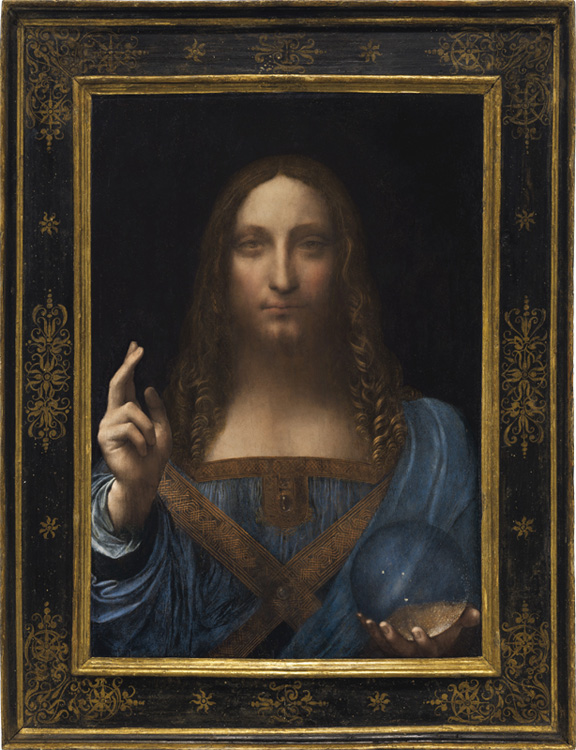 Salvator Mundi (c.1490) by Leonardo da Vinci was the greatest art rediscovery of the 21st century. It is the only piece of known work created by the artist currently in private hands and will be presented for sale at a Christie’s auction in New York on 15 November 2017.

Leonardo da Vinci (1452–1519) is one of the most famous artists of all time. While there are only a very small number of his works that still survive today, his prevalence is undeniable. Many of his most revered paintings have been widely reproduced and parodied including the likes of the Mona Lisa (1503–06) and The Last Supper (1494).

Salvator Mundi was thought to have been destroyed until it was rediscovered in 2005. The oil painting dates from around 1500 and depicts a half-length figure of Christ holding a crystal orb in his left hand and raising his right in benediction.

Alan Wintermute, senior specialist of Old Master Paintings at Christie’s commented: ‘The Salvator Mundi is the Holy Grail of old master paintings. Long-known to have existed, and long-sought after, it seemed just a tantalizingly unobtainable dream until now.

‘To see a fully finished, late masterpiece by Leonardo, made at the peak of his genius, appear for sale in 2017 is as close as I’ve come to an art world miracle. It has been more than a century since the last such painting turned up and this opportunity will not come again in our lifetime. I can hardly convey how exciting it is for those of us directly involved in its sale.

‘The word “masterpiece” barely begins to convey the rarity, importance and sublime beauty of Leonardo’s painting.’

Salvator Mundi is known to have been in the personal collection of King Charles I, which was then passed on to his son, Charles II. Little is known of where it was kept until the 18th century, but in 1763 it was auctioned following the sale of what is now Buckingham Palace to the king. After this sale it disappeared until 1900, when Sir Charles Robinson bought it believing it was the work of da Vinci’s follower, Bernardo Luini. No one knew it was actually painted by da Vinci himself, and Christ’s face and hair has been painted over. In 1958 it was sold at a Sotheby’s auction for only £45.

In 2005 the painting was rediscovered, however it took a further six years to verify its authenticity.

Christie’s will tour Salvator Mundi before the sale to Hong Kong, San Francisco, London and New York. It is estimated to fetch a staggering US$100 million.