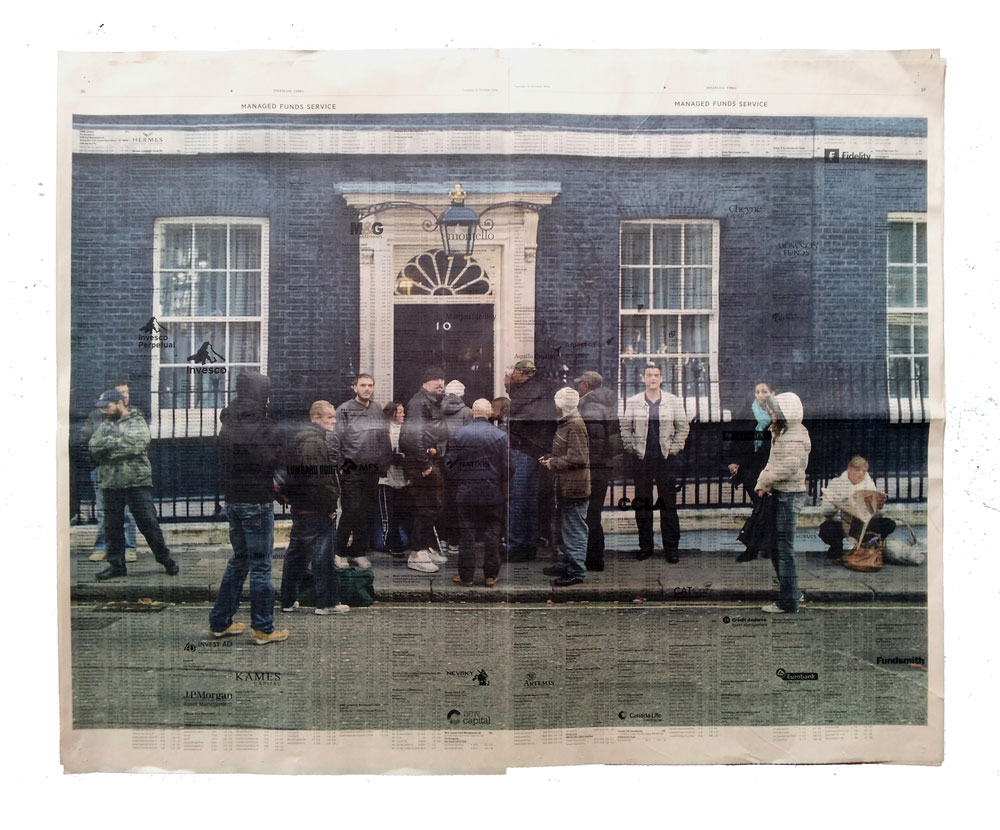 ‘Strong and Stable into Ruin.’ This is an apt quote from Kate Tempest’s new poem that has been chosen to accompany this new exhibition, May Not, from renowned political artist duo KennardPhillips. Staged around the British general election, with poll date closing in on Tuesday 8 June, these pieces of political art represent the current political upheaval and oppression that is currently dominating the artists—and many others’—current outlook on national and global current affairs. The pieces are to be staged at Dadiani Fine Art in the heart of Mayfair on the eve of the general election.

The installation by kennardphillips is built up of a series of photomontages printed on The Financial Times and blank newsprint, propped up on a three-dimensionalised red graph. The installation guides the onlooker through the gallery linking a connective thread from cause to effect, showing the real world impact they view our current political climate to be having.

May Not’s particular political stance on the recently called snap election is clear. The image of Nigel Farage, clutching a pint, emerging from Theresa May’s head is hard to dispute as one that comments on the opinion that UKIP’s party ideologies have been strongly absorbed into the beliefs of the Conservative party.

A provocative statement? Yes, without a doubt, but this was never meant to be anything but. Art such as this by design can settle in the mind of the public just as—if not more strongly than—your average news story. Why else would pieces in such publications such as Private Eye and The Economist be embraced for their satirical statements so profoundly? Another image shows the dispossessed gathering outside the door of 10 Downing Street. Pieces such as these are hard not to internalise.

Kennardphillips is a collaboration between Peter Kennard and Cat Phillips who have been working together since 2002, previously working on work on the invasion in Iraq that addressed the themes of power and war across the globe. Perhaps a piece the viewer might recognise is the image of Tony Blair taking a selfie in the war zone of Iraq. Phillips stated, ‘We want to reach beyond a traditional art audience. The old Masters wrote the news in paint, we are trying to do the same. We are opening people’s eyes to what art can be.’

May Not by kennardphillips opens from June 6 with a private showing and is open to the public on June 7 to July 7.