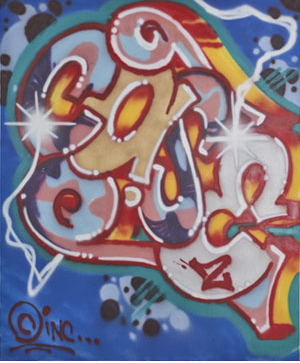 A recently discovered aerosol on canvas work by Jeffrey Brown, the late ‘King of Style’ graffiti artist, will go on sale at Julien’s Auctions this May.

The world record-breaking auction house today announced the work of Jeffrey Brown, aka CASE2, would spearhead the sale.

‘Julien’s Auctions is thrilled and honored to find and offer this rare and one of its kind extraordinary piece of work by CASE2, a powerful artist whose impact goes beyond graffiti,’ said Darren Julien, president and chief executive officer of Julien’s Auctions.

‘CASE2’s innovative artistry and style changed the way we view graffiti art and its possibilities and his influence on the popularity of today’s street art and hip-hop culture is undeniable.’

The artist created it prior to his death in 2011 as a ‘thank you’ to his lawyers, after they managed to get drugs charges that were levelled against him dismissed.

Widely considered as one of the pioneers of graffiti art in the 70s and 80s, CASE2—also known as Kase2 and King Kase2—had an enormous influence on both the hip-hop and street art movements.

Born in 1958 in the South Bronx, New York City, he lost his right arm and leg at ten years old in a subway accident.

In a demonstration of the artist’s resilience, he lived his life to overcome his injuries in pursuit of his artistic endeavours.

His first spray painted works included a handball court in 1973 and by 1976 he had emblazoned his tag over more than 50 subway trains.

CASE2 was a member of The Fantastic Partners (TFP), a Bronx graffiti crew that included his partner BUTCH2, who also painted whole train carriages in the 70s and early 80s.

In the 80s, CASE2 developed his own style signature of writing called ‘computer rock’, an innovative wild-style graffiti where letters are broken into boxes and scrambled.

This style showcased CASE2’s talents and challenged other graffiti artists to attempt to outdo his craftsmanship.

In the film, he described his childhood injuries: ‘It wasn’t no severely bad accident, just that I got burnt by wires, that’s all, electrical wires, and then they rushed me to the hospital and they just had to amputate, ’cause my tissues and muscles was burnt bad.’

For more information on the Julien’s Auction sale, head to http://www.juliensauctions.com/

If you enjoyed reading this article on Arts & Collections, click here to read about The Beatles Rock ‘n’ Roll Discovery Day.