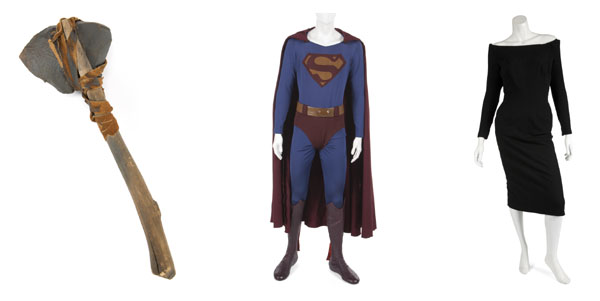 Julien’s Auctions has announced a star-studded lineup for its HOLLYWOOD LEGENDS sale, taking place on June 23.

Highlights from the auction, which will be held at Planet Hollywood Resort & Casino in Las Vegas, will include an Ewok axe and Imperial Trooper blaster from Star Wars: Return of the Jedi, Marilyn Monroe’s black wool dress and Superman III’s full costume.

‘Julien’s Auctions is proud to present this fascinating collection representing some of the most defining and intriguing moments in Hollywood history,’ said Darren Julien, the chief executive officer of Julien’s Auctions.

‘From the unforgettable Return of the Jedi props to Marilyn Monroe’s iconic black wool dress, these pieces touched by these great Hollywood legends made an indelible mark on the lexicon of American pop culture.’

Numerous props and iconic sci-fi weapons from the third instalment of the original blockbuster trilogy Star Wars will go under the hammer.

Of the items from Return of the Jedi (Lucasfilm, 1983), highlights include an original production used BlasTech EC-17 holdout blaster—also known as a ‘scout blaster’ or ‘scout pistol’, personally approved by George Lucas (estimate: $20,000-$30,000); an axe prop weapon used by the Ewoks in multiple battle scenes (estimate $8,000-$10,000) and five original blueprints used during the production, including Jabba the Hut’s Barge, the Tatooine Dune Sea and Jabba’s Sail Barge & Skiffs (estimate: $2,000-$4,000).

A trio of motorcycles, ridden by some of Hollywood’s most famous rebels will also appear on the auction stage. They will include a 1969 Harley-Davidson FLH Electra-Glide motorcycle owned by Marlon Brando (estimate: $150,000-$200,000) and a 1987 army green Harley Davidson FLSTC Heritage Softail Classic, with a colour-matched half helmet and a pair of leather gloves owned by Arnold Schwarzenegger (estimate: $30,000-$50,000).

A remarkable and intimate collection of personal items and ephemera from one of Hollywood’s greatest screen goddesses reveals the many facets and fashion of Marilyn Monroe.