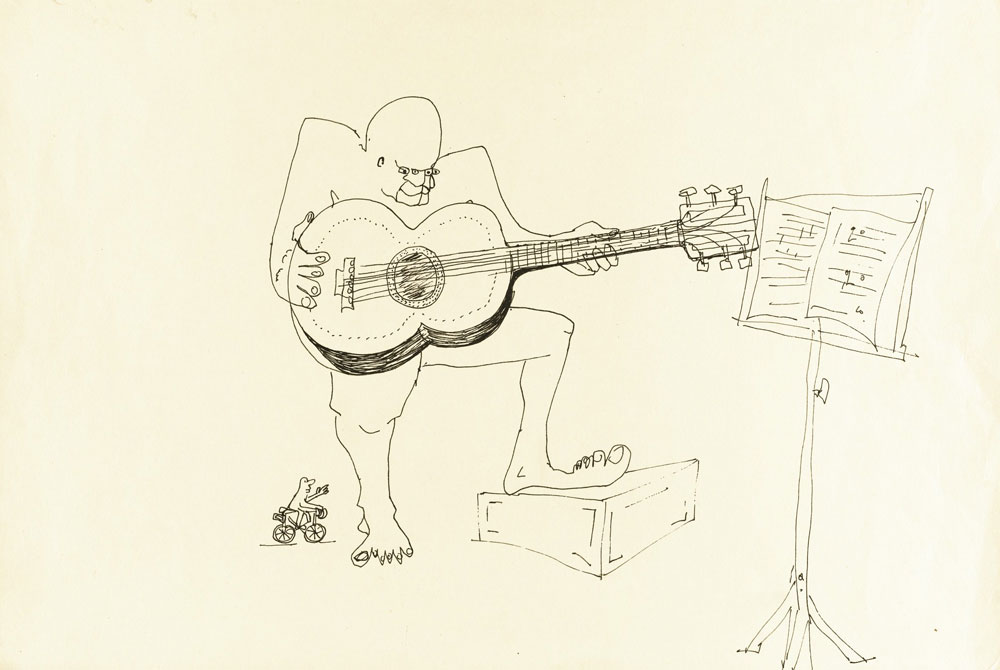 4 June 2014: At Sotheby’s New York the single-owner auction “John Lennon: ‘You Might Well Arsk’: Original Drawings And Manuscripts”, 1964-65 was 100% sold bringing the outstanding total of $2,899,000, well over the $1.2m high estimate with a significant proportion of the lots receiving online bids.

The sale was led by The Singularge Experience of Miss Anne Duffield, the manuscript of Lennon’s bizarre and hilarious parody of Sherlock Holmes from his book A Spaniardin the Works published in 1965 which sold for $209,000 ($50/70,000), which was just one of many manuscripts in the sale that soared over their high estimate.

The drawing commanding the highest price was the Untitled Illustration Of A Four-Eyed Guitar Player which fetched $109,375, multiples of the $15/25,000 estimate.

Philip Errington, Director, Sotheby’s Books and Manuscripts Department commented: “With every lot sold in the single owner ‘You Might Well Arsk’ sale, and a total far above the high estimate John Lennon has now been recognized as having an exceptional literary and artistic talent.”

Gabriel Heaton, Deputy Director Sotheby’s Books and Manuscripts Department added: nonsense verse, puns, wicked humour and comic drawings continue to resonate fifty years after the publication of In His Own Write and A Spaniard in the Works.”

The sale of drawings and manuscripts produced by Lennon for his critically acclaimed books: In His Own Write (1964) and A Spaniard in the Works (1965) represented the largest private collection of John Lennon’s work ever to come to market. All 89 lots had been in the private collection of legendary publisher Tom Maschler who first spotted Lennon’s artistic talent and brought the books to market.