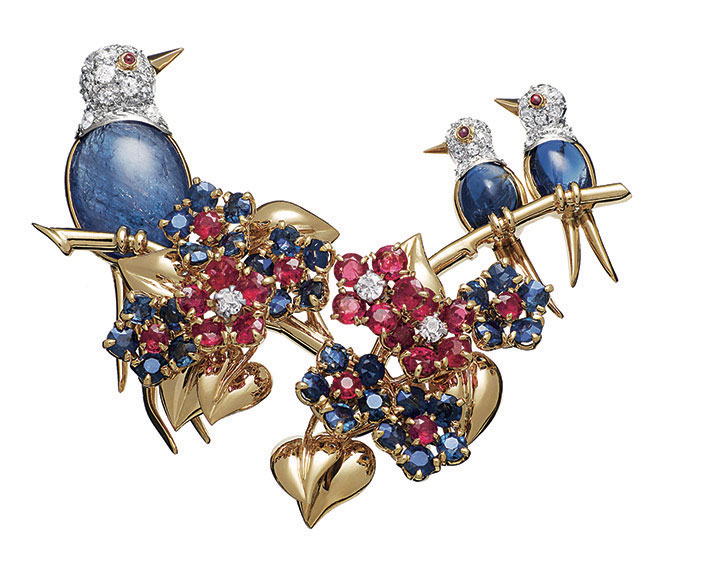 For centuries, Japan’s city of Kyoto has been a central hub for the creative arts. This year, the city’s National Museum of Modern Art will house its latest exhibition Mastery of an Art: Van Cleef & Arpels—High Jewellery and Japanese Crafts.

The retrospective will focus its attention on French high-jewellery and Japanese craftsmanship, providing insight into each country’s cultures. 260 high jewellery pieces by Van Cleef & Arpels will be on display, accompanied by 60 works of art by various Japanese artists. ‘This exhibition will be […] explaining the different crafts and techniques we are using and those that have been used in Japan,’ says Nicolas Luchsinger, director of the heritage collection at Van Cleef & Arpels.

The exhibition will be divided into three sections: History of Van Cleef & Arpels, Mastery of an Art and A Fusion of Cultures and the Future. The first section maps the history of the established Maisons since the company was founded in 1906 in Paris to the present day.

Eighty pieces of jewellery will be used here to demonstrate the evolution of their style and technical innovation. Among these examples is the famous Van Cleef &Arpels ‘Mystery Set’. Patented in 1933, the ‘Mystery Set’ refers to a unique technique which allows a stone to be set within a jewellery piece with no visible metal, framing or prongs. The stone is elevated and accentuated as if floating. This technique has been carried forward and used within the work of the skilful craftsmen such as Mains d’Or. The Zip necklace will also take pride of place in this section. The necklace, which transforms into a bracelet, makes for a versatile yet elegant design.

The second section of the exhibition involves Van Cleef & Arpels presenting a selection of 100 pieces that encapsulate the craftsmanship involved in haute joaillerie, alongside 50 equally sublime Japanese crafts. This section will seek to draw parallels between the skillsets required to create the two artistries.

In Japanese culture, meticulously made crafts such as vases, incense boxes and clips are considered as valuable as fine art. The modern era around the end of the Meji Period (1868-1912) saw a huge emphasis on independent Japanese artisans focusing their work on creativity and original designs.

A variety of techniques are associated with this time period and will appear within the display: cloisonné enamel, lacquerware with maki-e enamel (precious metal dust sprinkled on lacquer), ceramics, metalwork and gold brocade used in junihitoe (twelve-layered ceremonial kimono). Similarly, high jewellery, with exquisite stones and masterful metalwork, can also be described as treasures. The exhibition aims to interweave examples of each cultural art form, likening each ones methods, expertise and effort to manufacture.

A Fusion of Cultures and the Future, the final section of the collection, tries to encourage the emergence of a new perspective. Work by Moriguchi Kunihiko (yuzen dyeing), Kitamura Takeshi (tatenishiki weaving), Nakagawa Kiyotsugu (woodcrafts), the lacquer artisan Hattori Shunsho and the ceramic artist Miwa Kyusetsu XII will also take centre stage.

The closing of the exhibit will highlight the emergence of collaborative pieces; this special display will feature art works that involve aspects of both French and Japanese influence.

Kyoto’s National Museum of Art are ‘convinced that it will be possible to attain a greater level of cultural exchange and fusion between France and Japan’ with the inclusion of their traditional crafts on display. They shrewdly observe that passion for art and workmanship transcends borders; it is a language understood by everybody irrespective of nationality, which is precisely the message intended within this monumental exhibition.