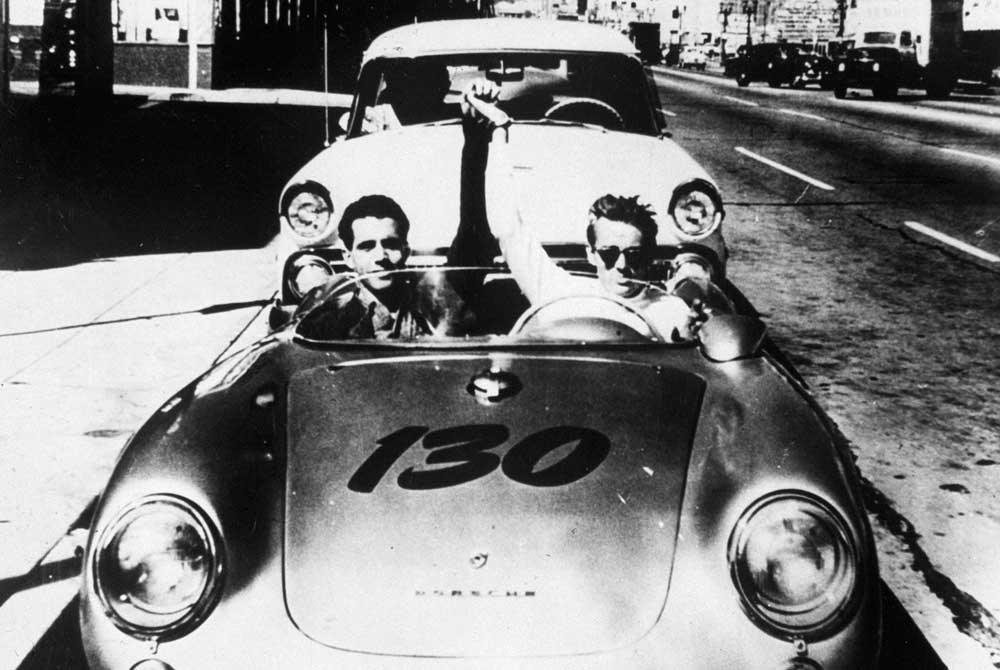 The 50th anniversary of Porsche’s iconic 911 car brings us a timely reminder of James Dean and his passion for his Porsche 550 Spyder.

James Dean died on a California highway near Paso Robles when his speeding Porsche Spyder crashed head-on with an approaching vehicle. It was September 30, 1955, James Dean was just twenty-four and his untimely end cemented his image as the king of cool and the icon of teenage disillusionment.

“Dream as if you’ll live forever. Live as if you’ll die today”—James Dean’s own words have become his epitaph, and those who knew Dean say that he kept his word.

Famous for his roles in just three films, all filmed in the last year of his life, Rebel Without a Cause, East of Eden, and Giant (released posthumously, 1956), James Dean played with natural swagger the wayward, angry teenager, the loner, and, finally, the sour and surly ranch hand. In each film James Dean took the starring role.

James Dean’s teen years suggest he was well fitted out in real life for the film roles he played. His mother died when Dean was aged nine, in high school his academic record was unimpressive although in sports he excelled; then, resulting from his move towards acting and drama school, he fell out with his father. Much later, Elizabeth Taylor revealed that James Dean had told her ‘Jimmy’ had been sexually abused by a minister, following his mother’s death.

What popularised James Dean in the eyes of his many fans was his non-conformist stance and his particular resentment towards any form of authority: “There is no way to be truly great in this world. We are all impaled on the crook of conditioning,” he said. James Dean always had a ready repost or putdown: when told he was too short to be an actor, he asked: “How can you measure acting in inches?” Today it’s called attitude.

Film success brought James Dean comparative wealth, enabling him to live his dream—driving cars, fast. In the last year of his life he bought a rare Silver Porsche Spyder, one of only ninety built that year.

He gave it the nickname, ‘Little Bastard’. James Dean’s friends told him the car had ‘trouble’ written all over it when they first saw it, which no doubt only added to its appeal. On purchasing the $7,000 sports car he had it customised, adding tartan seat covers and the large ‘130’ racing number on the doors, hood and engine cover, he also added the now infamous ‘Little Bastard’ badge. The Porsche 550 Spyder is now forever linked with James Dean’s memory.

This year also sees the 50th anniversary of the Porsche 911, which is the descendent of James Dean’s Porsche 550 Spyder, although the historian will tell us that the 911 roots in fact go as far back as sketches drawn by Ferdinand ‘Butzi’ Porsche in 1959.

The 911 is as much a legend as James Dean himself, having been in continuous production since its introduction in 1963, with a series of modifications and enhancements during the ensuing years, all of which have kept serious Porsche collectors happily unloading their wallets. The Porsche 911 has been voted No.2 in a line-up of the One Hundred Coolest Cars (topped only be the Chevrolet Corvette Sting Ray).

Porsche has always been known for pushing development and innovation. As early as 1900, the company introduced the Lohner-Porsche electric car, which was presented at the World Fair in Paris. The wheel hub engines of the young engineer Ferdinand Porsche brought him international attention. In the same year, Porsche developed an all-wheel-drive racing car, as well as a hybrid petrol/electric vehicle—a world first.

In the following years Porsche models distinguished themselves on numerous racetracks. We see the Porsche 550 Spyder introduced in 1953 at the Paris Auto Show, powered, the manufacturers tell us “by an extremely powerful 4-camshaft engine—the light and agile racecar scored countless international triumphs”. In the company’s history of the 550, James Dean gets no mention. However, Porsche plans a celebration of ‘60 Years of the 550 Spyder’, with an exhibition at the Porsche Museum, Stuttgart from October 15 into 2014.

Porsche will also celebrate ‘50 Years of the Porsche 911’ from June 4 to September 29, 2013, informing us: “The Porsche 911, the sports car with its iconic status, has reached the ripe old age of 50. For half a century now, the Porsche 911 has been revered as an iconic automobile and the very epitome of the sports car.

After all, the 911 is much more than simply a motor vehicle. It is a cult object, that raises the heartbeat of car enthusiasts all over the world, even before it gets into gear. More than 800,000 911s have been produced since it was first unveiled at the Frankfurt Motor Show in 1963. No other sports car in the world has managed to fascinate more automobile fans.”

Porsche 930 a turbo version of the original 911

(* The latest Porsche models are designed to operate on fuels with an ethanol content of up to 10%.)