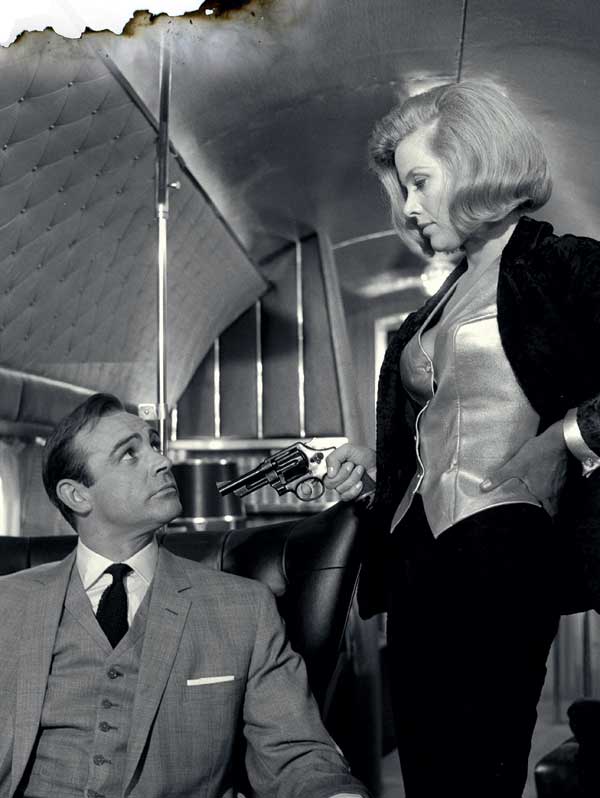 Two anniversaries fall this year for James Bond, a 50th and a 60th anniversary. Celebrations include the release of the film Skyfall, an exhibition of 50 Years of James Bond Style, and an online and live auction that offers collectors a piece of the Bond legacy.

Most of us have seen at least half a dozen James Bond films, but few have read a James Bond novel. And this was how James Bond first made his entrance, in a novel by Ian Fleming called Casino Royale, published by Jonathan Cape in 1953 and priced at ten shillings and six pence (still available from rare bookshops, but now costing up to $50,000 for a mint first edition).

In 1953, large parts of the western world were depressed following the Second World War, food rationing in the UK only ended a year later, and the Cold War with Russia had commenced. Into this austere world, enters Bond. James Bond. He loves fast cars, beautiful women, sexy double entendres, exotic locations and he’s addicted to dangerous assignments involving Iron Curtain intrigue and espionage. Through James Bond, Ian Fleming opened the door on a glamorous world that contained a heady mix of style and sophistication, mysterious plotting, high living and instant death.

Fleming, who was well acquainted with the real world of espionage having met many commando types and secret agents during the Second World War, began writing this, his first Bond novel, on February 17, 1952, at his private estate in Jamaica. He continued to produce a James Bond novel each year for the next fourteen years, his legacy being one of the most successful fictional characters of the twentieth century and now of the twenty-first century. But it was not until 1962 that the first Bond film was released (Dr. No), to be followed by 17 Bond films up to 1987, each based on the Fleming novels, and more films have followed.

This year, 2012, is a landmark year, marking the 60th anniversary of Ian Fleming’s creation of James Bond, and the 50th anniversary of the world première of the film Dr. No. Today, our hero is still very much alive and well in the guise of Daniel Craig, who stars in the anniversary Bond film Skyfall (released October), with a star cast including Ralph Fiennes, Javier Bardem, Helen McCrory, and of course Dame Judi Dench as M.

The exhibition showcases ‘previously unseen costumes, lavish recreated sets, iconic gadgets, props, original photographs and concept drawings are set to thrill audiences in celebration of half a century of the most charming and sophisticated of secret agents’. Highlights include the steel teeth worn by Richard ‘Jaws’ Kiel in The Spy Who Loved Me (1997); storyboards for Diamonds are Forever (1971); the Anthony Sinclair overcoat worn by Sean Connery in Dr. No (1962); the poker table from Casino Royale (2006); multiple gadgets from Q Branch including the attaché case given to Bond in From Russia With Love (1963); and the 1961 United Artists/Eon Productions contract to produce the James Bond film series.

‘The Auction: 50 Years of James Bond’ was presented by Christie’s and Eon Productions as an online auction (lots 1-40), September 28, and as a live auction (lots 41-50) October 5, and flagged as ‘Global James Bond Day’, suggesting that Bond himself has taken over the world rather than, in his usual role, saving the world from an evil, scheming tyrant. Meg Simmonds, Archive Director Eon Productions, commented: ‘We hope these 50 lots will raise a large sum of funds and help make some lives better. At the same time we hope the purchasers will enjoy having a little piece of Bond to call their own.’

The sale offered a rich collection of books, posters, props, miniatures, a scale model of the space shuttle Moonraker, a snooper dog robot model (A View to a Kill), designer clothing and jewellery, and a stainless steel Omega Seamaster Professional ‘Planet Ocean’ wristwatch worn by Daniel Craig as James Bond in Quantum Of Solace, among many other highly collectable items.

James Bond continues to move with the times, as each successive film has shown, dropping the bad habits (heavy smoking) but still getting the girls, still stylish down to his cuff links, and still expert with his lethal weapon on every occasion. All this is thrillingly translated to the big screen. But, as those who have read some of Ian Fleming’s Bond novels know, Fleming himself has a uniquely stylish style and a panache all of his own and if you haven’t read the books, you’ve missed something.

File Of The Soviet Anti-Spy Organisation SMERSH On Agent 007 Of The Secret Service:

Vices: drink, but not to excess, and women

The Property Of A Lady

Memorabilia Collectors Of Pop And Celebrities